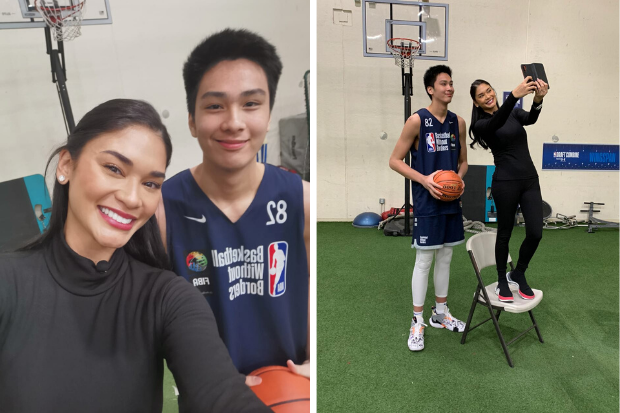 Former Miss Universe Pia Wurtzbach got the chance to spend some time with teenage basketball sensation Kai Sotto at the Basketball Without Borders Global Camp during the 2020 NBA All-Star Weekend.

It turns out that the 5-foot-8 Filipino-German beauty queen needs a chair to take a decent selfie with the towering Sotto, who stands at 7 feet 2 inches tall, NBA Philippines’ official Twitter page showed last Sunday, Feb. 16.

“Our Rep to the Republika takes a selfie with the towering Pinoy basketball sensation!” the page said. Even with the chair, Wurtzbach appeared to still be a few inches shy from the 17-year-old’s impressive height.

Our Rep to the Republika takes a selfie with the towering Pinoy basketball sensation! 🇵🇭 pic.twitter.com/4kI8pehHqS

In another tweet, Sotto showed off his basketball skills by going for an alley-oop dunk with the help of the former Miss Universe.

“@PiaWurtzbach lobs it to  @kzsottolive for the alley-oop slam! What do you think of this duo?” NBA Philippines said on Twitter on Feb. 16.

.@PiaWurtzbach lobs it to @kzsottolive for the alley-oop slam! 🔥 What do you think of this duo? pic.twitter.com/tUvZ1YArhf

Wurtzbach likewise shot some hoops with the help of the teenager, who showed her the basics of shooting in the court. NBA Philippines captured a short clip of the moment and posted it to Twitter also on Feb. 16.

“Queen @PiaWurtzbach works on her fundamentals with help from  @kzsottolive,” the page said.

Queen @PiaWurtzbach works on her fundamentals with help from @kzsottolive. 🎯 pic.twitter.com/v3trHCQv7L

“We’re so honored na you’re here and representing us and soon enough, talagang cross fingers kami (we are really crossing our fingers) that you’ll be the very first Filipino NBA player,” the beauty queen told Sotto in one of the clips on the same day.

The Filipino basketball prodigy was one of 64 chosen to be part of the global camp held from Feb. 14 to Feb. 16 in Illinois, United States as part of NBA’s all-star festivities this year. JB

Read Next
Why Jasmine Curtis-Smith is so sure Anne will be ‘the best mom’
EDITORS' PICK
Acer starts the year off strong with the Aspire Vero National Geographic Edition
Gear up and get ready to play with Yamaha Mio Gear
PH to import 60,000 tons of fish to cover shortage
Workers are exempted from ‘no vax, no ride’ policy – DOLE chief
Over 3 Million worth of prizes to be won at Smart Padala’s SENDali Manalo Promo!
#VotePH2022: COVID, power woes loom as poll concerns
MOST READ
Guevarra to Acosta: Obey rules on unvaccinated
Emma Stone calls Andrew Garfield a ‘jerk’ after he ‘lied’ about his ‘Spider-Man: No Way Home’ appearance
Cold-case investigation names surprise suspect in Anne Frank’s betrayal
Czech anti-vax singer dies after deliberate infection
Follow @IBiongINQ on Twitter
Don't miss out on the latest news and information.