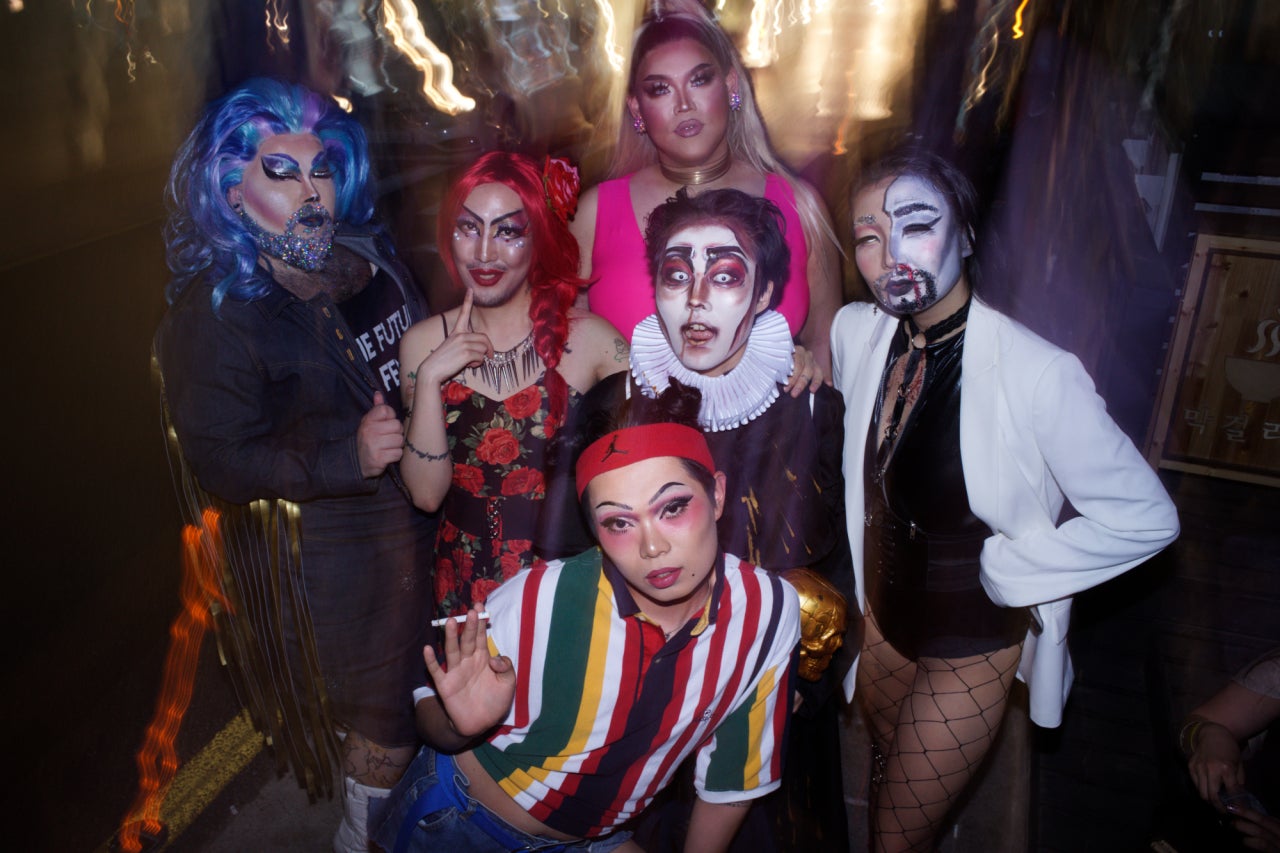 Local drag artists pose at Jasmin Rice in Seoul on May 24, 2019. Argus Paul via The Korea Herald/Asia News Network

SEOUL — All eyes will be on Seoul’s burgeoning underground drag scene when local artists kick off the Asia tour of “RuPaul’s Drag Race: Werq the World” at Yes24 Live Hall at the end of this month.

The Asian leg of the international tour, produced by Voss Events, will take popular performers, including Kim Chi — a Korean American contestant from Season 8 — to Hong Kong, Singapore, Manila and Tokyo, in addition to Seoul.

The Emmy award-winning television show “RuPaul’s Drag Race,” widely acclaimed for its role in the popularization of drag culture in the mainstream media, will broadcast its 12th season this month.

On Feb. 25, the pre-show will offer a taste of the South Korean drag scene, performed by an array of local drag performers selected by queer activists and organizers of the Seoul Drag Parade Heezy Yang and Ali Zahoor.

“I think ‘RuPaul’s Drag Race’ is just one part of the queer scene. Not everything you see on RuPaul is correct about drag. Sometimes things are underrepresented,” he said. “We want to extend people’s minds to show that there can be drag kings, live singing and K-pop drag shows.”

While “RuPaul’s Drag Race” gives drag queens an international platform, drag kings — most of whom embody masculine gender stereotypes in their work — are widely underrepresented in popular culture. Korean drag king Azangman will join the lineup of local performers.

“Drag represents my queerness, my nationality and my birth,” they told the Herald. “My father and grandmother would tell me that I was a mistake in their plan for a son when they raised me. I always felt ashamed because of my gender and grew up feeling unwelcome in my home. Korea’s history of selective abortion of females became my impetus to do drag.”

Hoso Hailey Sodomite, another drag artist in the lineup, said: “Drag has helped me embrace standing in the world as a queer person and express my anger through my art. Hoso embodies everything the society fears about a queer identity. The more heinous and more shocking that might set the heteronormative society off, the better. I hope the audience will start supporting the local talent after seeing what we can bring to the stage.”

The opening show will include songs by K-pop icons such as 2NE1, Sunmi and ITZY. It will also include a performance that pays homage to Queen, a British rock band that gained broad recognition in Korea in 2018 after the release of “Bohemian Rhapsody,” the biopic of queer icon Freddie Mercury.

On sharing the stage with international drag queens, Azangman exclaimed: “I love Rugirls, especially Plastique Tiara. The fact that I get to see them from such a short distance makes me excited and I am not so nervous because I have my friends performing with me.”

Erica Chai, a drag queen, is honored and humbled by the opportunity. “There are so many talented drag artists in Korea and I feel so proud to represent local Korean drag to the world. I’m so excited to meet all the RuGirls and to showcase my art to an audience that loves drag.

“I hope that the audience sees how diverse and talented the local Korean drag scene is. I am confident that all of us will entertain the crowd and have the chops to be on ‘RuPaul’s Drag Race,’ but I have to work on my sewing skills first. I hope that everyone just has a great time and is moved to come see our shows at local venues.”

The queer community in Korea is emerging, with the Seoul Drag Parade now in its third year. This year it will be held in Seoul’s Hongdae area in the spring.

“When we first organized Seoul Drag Parade, we wanted to bring drag into the sunlight,” said Yang. “We want drag to be something people can see outside out being drunk at a nightclub and enjoy the way we express ourselves and explore our sexuality and style.

“I want to blow their minds.”