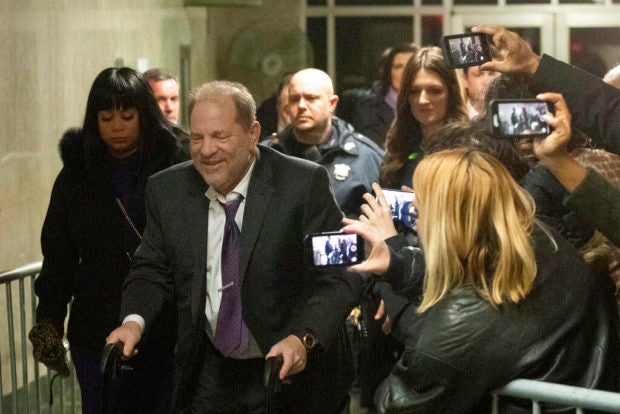 NEW YORK — In the strongest defense testimony yet, a Mexican model on Monday denied a Harvey Weinstein accuser’s claim that she stood by and did nothing while the once-powerful movie mogul sexually assaulted the woman at a Beverly Hills hotel in 2013.

Young testified that Salinas closed the door behind her and Weinstein as they went into the bathroom, where she alleges he stripped off his clothes, grabbed her breast and masturbated. Once it was over, Young said she found Salinas standing outside the bathroom and shot her an evil look before leaving as quickly as she could.

“If I had done that, I would remember that,” Salinas testified. “I would never close the door on anybody.”

Salinas, now working as a social media influencer, took the witness stand as the defense called witnesses for a third day after more than two weeks of prosecution testimony. Among the prosecution witnesses were six women, including Young, who say the once-powerful Hollywood boss subjected them to vile sexual behavior.

“My name has been used in a disparaging way. Ms. Young’s testimony that I’ve heard in the media is fictitious and flat out untrue,” Salinas said in a statement sent to The Associated Press after she testified. “Under no circumstances would I ever have anything to do with an assault on a human being. This accusation was a vicious attack on my reputation.”

The biggest remaining question at the landmark #MeToo trial is whether Weinstein will testify. Weinstein declined to answer a reporter’s question about it as he left court on Monday, deferring to lawyer Arthur Aidala who declared: “It was a great day for the defense today.”

Weinstein’s lawyers say no decision has been made on whether he will take the stand.

Weinstein, 67, is charged with raping a woman in a Manhattan hotel room in 2013 and forcibly performing oral sex on a different woman in 2006, but other accusers, such as Young, were called as witnesses as part of a prosecution effort to show he has used the same tactics to victimize many women over the years.

Young’s allegations were included in criminal charges filed against Weinstein in California on Jan. 6, just as his New York case was starting.

Weinstein has maintained any sexual encounters were consensual.

Salinas met Weinstein in 2003, she said, and appeared in his 2009 film “Crossing Over” with Harrison Ford. She said she never had a romantic relationship with Weinstein, adding that he had a “very strong personality” and “at times, he wasn’t nice to me.”

Salinas disputed other parts of Young’s account, saying that while they did meet up at the hotel the night of the alleged assault, it wasn’t because Weinstein wanted to see her.

Asked on cross-examination if she told investigators last year that it was possible Weinstein took Young to the hotel room, Salinas replied: “What’s true is that I wasn’t there in a bathroom scenario. It could have happened but it didn’t mean I was there.”

Jurors also heard Monday from the former roommate of the woman Weinstein is on trial for allegedly raping. Talita Maia said that the woman spoke highly of Weinstein and once called him her “spiritual soulmate.”

Maia, a Brazilian actress who lived with the woman in the Los Angeles area, was with her on the New York trip and said nothing seemed amiss when they met Weinstein for breakfast after the alleged rape.

The accuser testified last week that she didn’t tell anybody what happened but was “pretty shut down” at breakfast.

“Did she seem like herself to you?” Weinstein lawyer Donna Rotunno asked.

Maia said she was testifying in response to a defense subpoena, telling jurors: “I don’t want to be here at all.” On cross-examination, she testified the two women had a falling out in 2016, but added, “I don’t hate her or anything like that.”

The Associated Press has a policy of not publishing the names of sexual assault accusers without their consent. It is withholding name of the rape accuser because it isn’t clear if she wishes to be identified publicly.

Maia said she and the woman met Weinstein at a Hollywood party a few months before the alleged rape and that she believed the woman and Weinstein were in a relationship at some point and had stayed friends afterward.

Maia said she initially didn’t know who Weinstein was, but once she found out he was a Hollywood bigshot, she teased him by saying “that’s why everybody is being so nice to you.”

Maia said the woman she was summoned to testify about put her arm around Weinstein and said: “No. It’s because he’s so cute.”