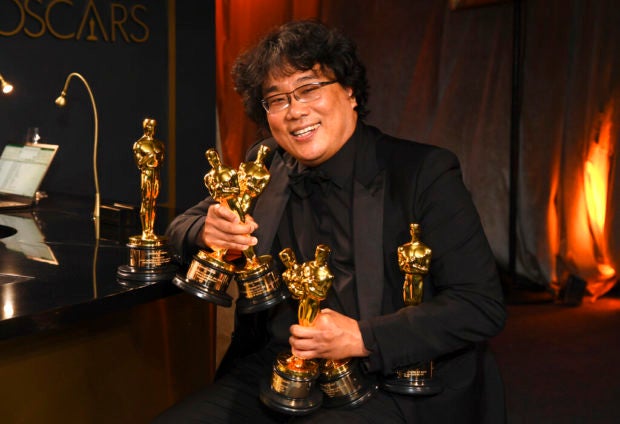 Bong Joon-ho holds the Oscars for best original screenplay, best international feature film, best directing, and best picture for “Parasite” at the Governors Ball after the Oscars on Sunday, Feb. 9, 2020, at the Dolby Theatre in Los Angeles. (Photo by Richard Shotwell/Invision/AP)

This seventh feature by 50-year-old director-screenwriter Bong Joon-ho is the first non-English-language film to win the best picture in the Oscars’ 92-year-history.

The black comedy-thriller about a poor family that gradually takes over a wealthy household is the first South Korean film to win in the Oscars — and win big it did, in the best picture, best director, best international feature (formerly foreign language film) and best original screenplay categories.

Only 10 other foreign-language films got a best picture nod but the Academy’s highest honors eluded them: “Roma” (Mexico), “Amour” (Austria), “Letters from Iwo Jima” (US), “Crouching Tiger, Hidden Dragon” (Taiwan), “Life Is Beautiful” and “Il Postino” (Italy), “Cries and Whispers” and “The Emigrants” (Sweden), “Z” (Algeria) and “Grand Illusion” (France).

Mendes’ World War I drama “1917,” which won most of the best picture honors in the awards season, was heavily favored to win.

Tarantino was predicted to snag best original screenplay, so the win by Bong in that race was another upset.

In an earlier interview, Bong talked about the directors he idolized in his formative years.

Accepting the best director prize, he paid tribute to his fellow nominees, particularly “our great” Scorsese, from whom he cited a quote that “the most personal is the most creative.”

Bong predicted that “naturally we will come to a day” when “a foreign language film winning this won’t be much of an issue.”

Pitt, who won best supporting actor for his stuntman/double role, dedicated his win, in a heartfelt speech, to his children with ex-wife Angelina Jolie.

It was Pitt’s first Oscar for acting, three decades after his breakthrough performance in the iconic road adventure Thelma and Louise, whose star Geena Davis and director Ridley Scott thanked on Oscar night “for giving me my first shot.”

Pitt’s first Oscar was for producing the 2012 best picture winner, “12 Years a Slave.”

Oscar night further underscored the themes of diversity and inclusiveness, in part because no women directors were nominated this year.

Natalie Portman, a best actress Oscar winner in 2011 for “Black Swan,” literally wore her feelings — she had their names stitched into the Dior cape she wore to the gala.

Laura Dern, who won best supporting actress as a Los Angeles divorce lawyer in Noah Baumbach’s “Marriage Story,” told reporters backstage, “When we use our voice, we are talking about us, each other, in whatever industry we are in. We have power to say something. And when we don’t see our culture reflected around us, we get to say something.”

Joaquin Phoenix won his first Oscar for his turn in supervillain origin story “Joker,” the film that started the night with the most nominations.

In an emotionally charged speech, the actor railed against injustice and “an egocentric worldview” that leads to environmental destruction, before paying tribute to his actor brother River, who died of a drug overdose in 1993.

Renee Zellweger sealed a remarkable comeback by winning best actress for “Judy,” dedicating the award to the Hollywood screen legend she portrayed.

“Judy Garland did not receive this honor in her time. I am certain that this moment is an extension of the celebration of her legacy,” she said in accepting her second Oscar.

Among the Filipino-Americans who contributed to that film were Robert Lopez, who was nominated along with his wife Kristen Anderson-Lopez for the theme song, “Into the Unknown,” and animation artist Mara MacMahon, one of the film’s animation artists.

“We’re so proud of Pixar to have such a diverse crew. There are people from all over the world working there, who are supporting these films. We’re so proud of the work they did,” Mark Nielsen, one of the producers, told the Inquirer backstage.

The ceremony had no host for a second consecutive time. Early reviews were not favorable.

“When the ads are the real stars, you really have a really serious problem,” wrote Deadline Hollywood, calling the ceremony “way too long.”—With a report from AFP