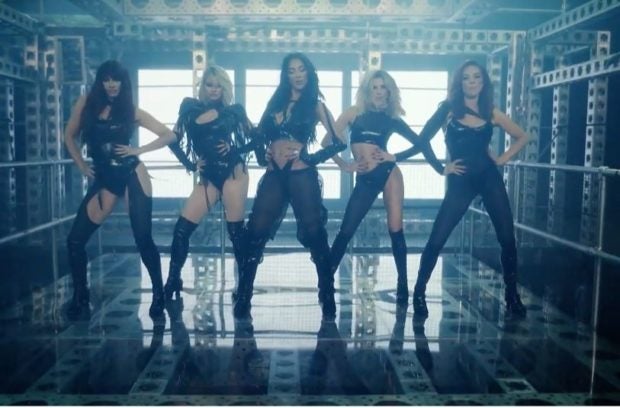 The girl group first teased their long-awaited comeback single during a performance on United Kingdom’s “The X Factor” in November 2019.

After much teasing on social media, “React” arrived alongside an accompanying music video filmed in Los Angeles by directing duo Bradley & Pablo.

One scene shows the quintet dancing under the rain in sultry nude-colored latex leotards, with Scherzinger singing “You’re turning me cruel ’cause I’m just wanting you to react/ Looking for a little confrontation/ Now I know the nice guys turn me bad.”

“React” is the Pussycat Dolls’ first new music since the release of their sophomore studio album, “Doll Domination,” in 2008.

Despite their worldwide success, the group disbanded in early 2010 after the completion of their 2009 world tour to pursue solo projects.

The “When I Grow Up” vocalists announced their reunion in 2019, without original member Melody Thornton.

We are officially BACK!!! 😻 Our brand new single #REACT is finally here and we are SO excited to share it with you. We hope you love it as much as we do!! 💖💋https://t.co/22xTX6KkN9 pic.twitter.com/eQGSgQ6LLg

“In the past few years, all of us girls have been talking and really trying to figure out when was a good time in everyone’s lives and it just all worked out that this was the right time individually for us to come together. It’s great because it’s around our 10-year reunion,” Scherzinger recently told Entertainment Weekly.

The frontwoman also briefly alluded to the band’s forthcoming third studio album, which will apparently not arrive anytime soon.

“We’re just kind of taking one thing at a time. We knew that we were excited for the comeback and to get the single together and the video and now we’re focusing on the tour. So with the music, we’re just seeing where that takes us,” she explained, adding that they have “just been playing around with a lot of songs that we feel are very strong and anthemic and very dance-driven.”

In addition to releasing their comeback single, the Pussycat Dolls are gearing toward their 2020 reunion tour.

I am very excited to share that we are back, baby! 😻 The #PCDReunion tour kicks off in the UK in April 2020! Tickets are on-sale this Sunday at 10am. What show are you coming to?! 🙌🏽🎶🤸🏽‍♀️ pic.twitter.com/fuwtunNmzf

The world trek will kick off on April 5 in Dublin’s 3 Arena, with additional dates announced in London, Cardiff, Glasgow, Birmingham and more British cities.  CL /ra