And the Oscar goes to…

For true-blue film enthusiasts, here are the likeliest winners, as well as a treasure trove of ‘ignored’ films and performances lurking under the Oscar radar
By: Rito P. Asilo - Entertainment Editor
Philippine Daily Inquirer / 12:30 AM February 08, 2020

The movie-binging runup to the 92nd edition of the Academy Awards began long before the December race for box-office domination heated up between MMFF (Metro Manila Film Festival) crowd favorite “Miracle in Cell No. 7” and the moldy, reheated gags of “The Mall, The Merrier.”

But the Oscar race seems like a done deal in some categories, particularly in all four acting matches. In the best actor derby, for instance, Joaquin Phoenix looks set to win his first golden statuette for “The Joker” after four nominations—especially after his significant wins at the Screen Actors Guild (SAG), the Golden Globes, the Bafta, the LA Film Critics and the Critics’ Choice Awards.

Cannes winner Antonio Banderas, also chosen best actor by the New York Film Critics for channeling his mentor Pedro Almodovar in “Pain and Glory,” is sublime, but it’s hard to beat Joaquin Phoenix’s mesmerizing turn in “Joker”—a vanishing act that is as transfixing as it is terrifying. 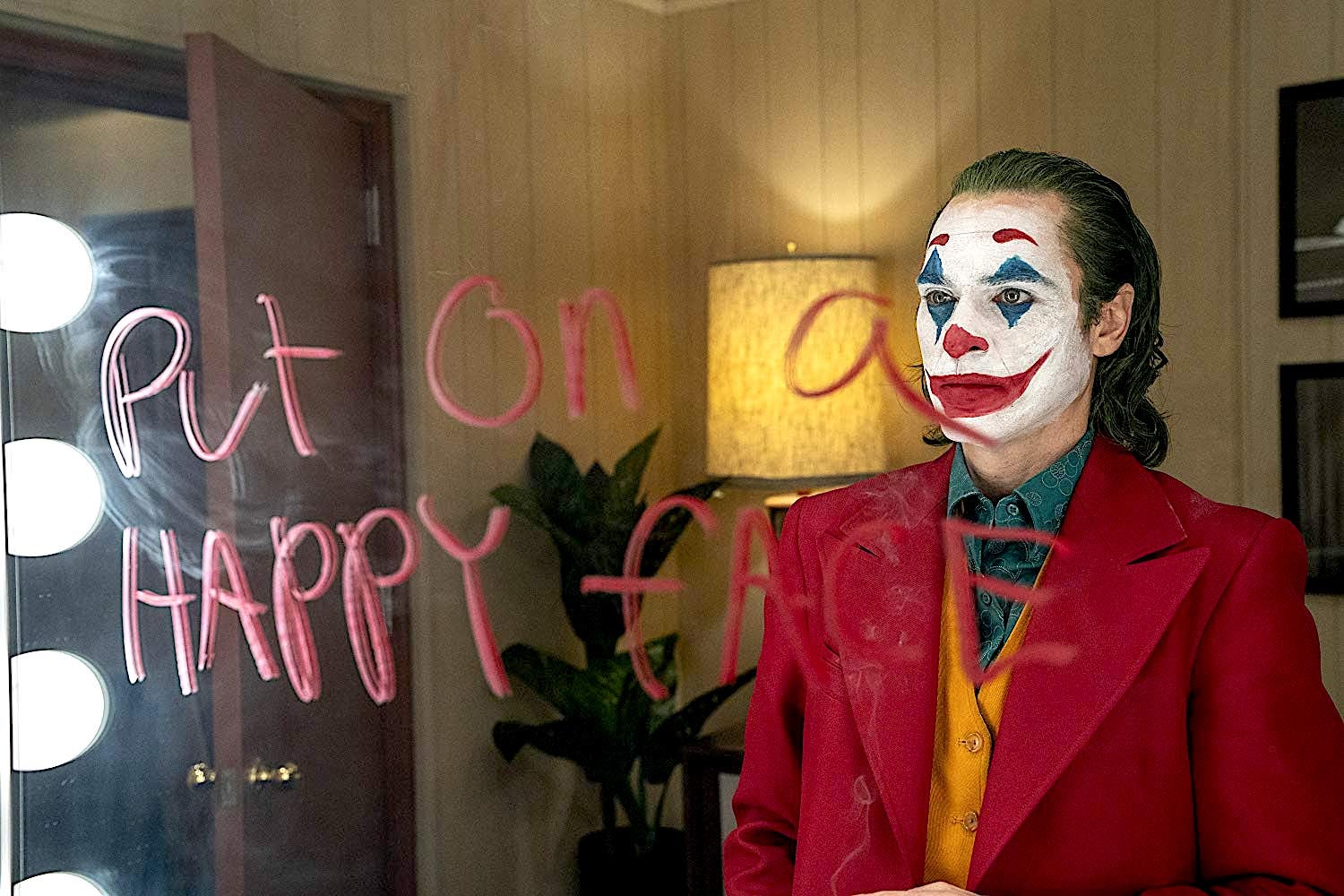 Keeping Antonio and Joaquin good company are Leonardo DiCaprio (as a fading action star in “Once Upon a Time … in Hollywood”), Jonathan Pryce (as Pope Francis in “The Two Popes”) and actor-of-the-moment Adam Driver (as a theater director perplexed by his wife’s unexpected decision to file for divorce in “Marriage Story”), who also made heads turn in “The Report” and “Star Wars: The Rise of Skywalker.”

Other notable lead-actor performances that we’ve seen this year: Christian Bale (as a brilliant but difficult race-car driver in “Ford v Ferrari”), Adam Sandler (as a gambling-addicted jeweler in “Uncut Gems”), Eddie Murphy (as actor-comedian Rudy Ray Moore in “Dolemite is My Name”), Matthew Rhys (as a cynical journalist in “A Beautiful Day in the Neighborhood”), Kris Hitchen (as a delivery driver with a lot of debts in “Sorry We Missed You”), Taron Egerton (as Elton John in “Rocketman”), Roman Griffin Davis (as a Hitler-loving boy in “Jojo Rabbit”), Zack Gottsagen (as a runaway with Down syndrome in “The Peanut Butter Falcon”) and Robert DeNiro (as a gangster’s henchman in “The Irishman”).Like Joaquin, Renee Zellweger also vanishes into her role as Judy Garland in “Judy”—a mesmerizing portrait of the troubled icon during the last year of her tumultuous personal and professional life in London. The 50-year-old actress was also declared best actress in five important pre-Oscar events: the SAG, the Golden Globes, the Bafta, the Critics’ Choice Awards and the National Board of Review. 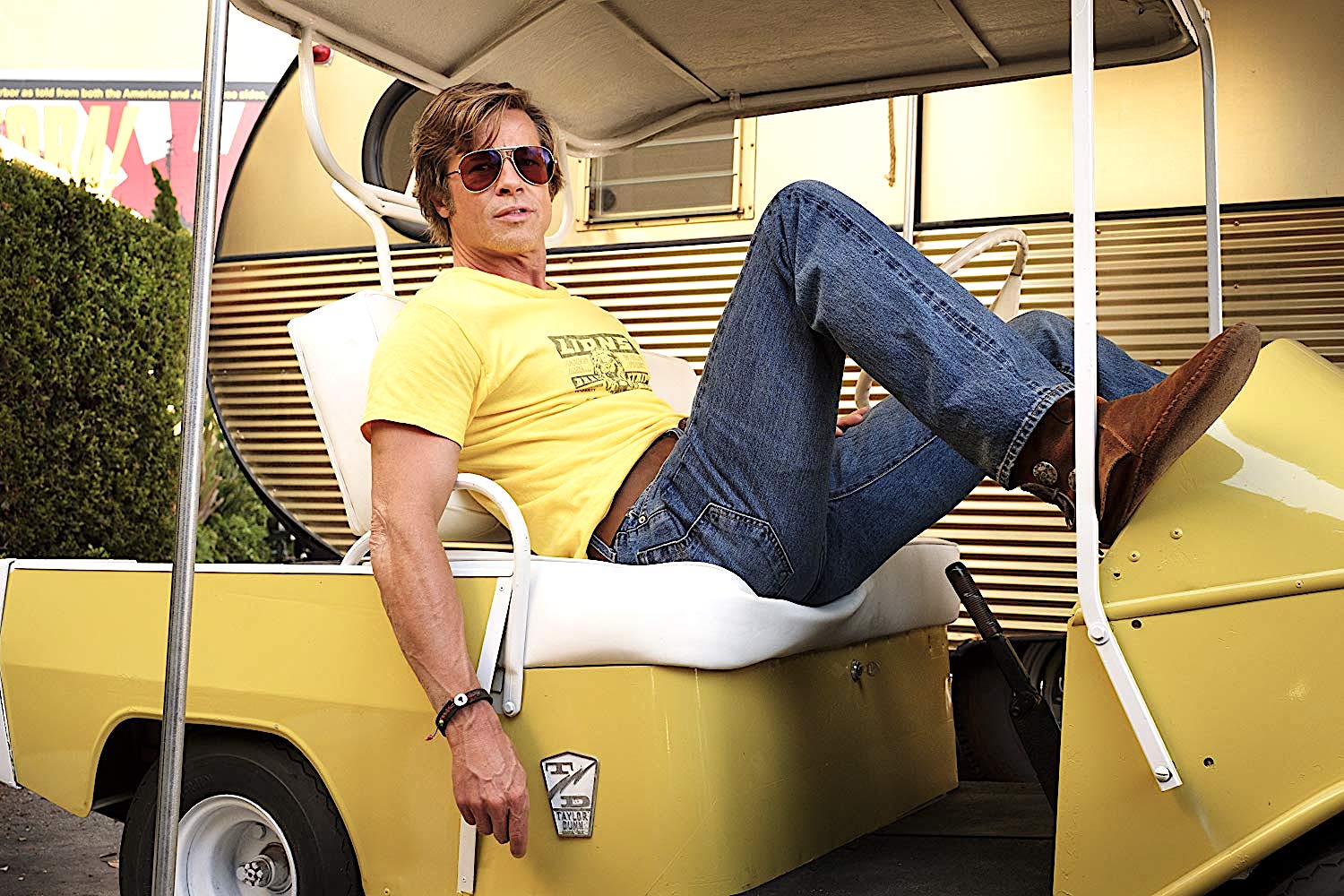 Brad Pitt in “Once Upon a Time … in Hollywood”

In “Marriage Story,” Scarlett parlays her deepening gravitas into acting gold as a woman tired of being her successful husband’s lesser priority). ScarJo’s first year in the Oscar spotlight has yielded two acting nominations, the other one for portraying a tragic heroine in “Jojo Rabbit.”She duplicates the feat of actresses with two Oscar nominations in one year, including Julianne Moore (“Far From Heaven,” “The Hours” in 2003), Cate Blanchett (“Elizabeth: The Golden Age,” “I’m Not There” in 2008), Emma Thompson (“The Remains of the Day,” “In the Name of the Father” in 1995), Sigourney Weaver (“Gorillas in the Mist,” “Working Girl” in 1989) and Holly Hunter (“The Piano,” “The Form” in 1994). 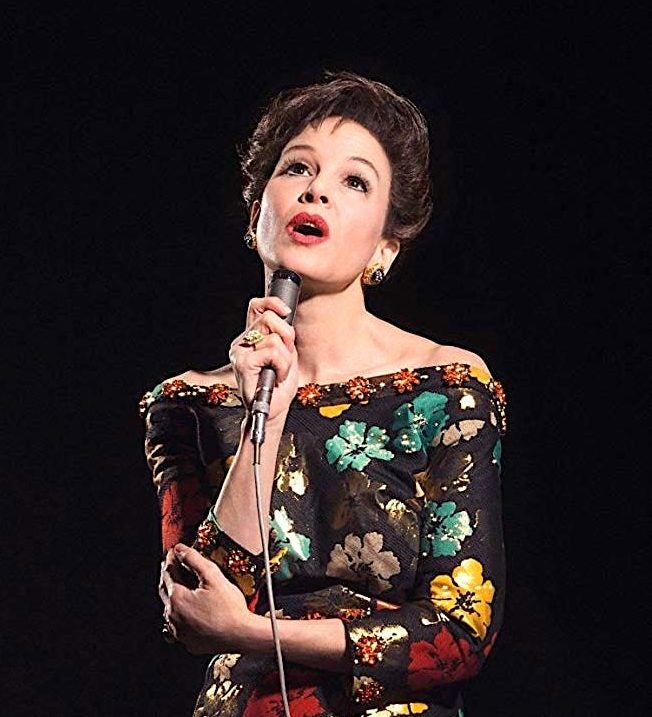 Cynthia Erivo, the only actor of color singled out in the acting categories, is also a double nominee, but her second citation is for cowriting with Joshuah Brian Campbell one of this year’s best song nominees, “Stand Up” (from “Harriet”).

We are thrilled about Cynthia’s successes—onstage and onscreen—because we watched her rehearse her scenes in Thornton Wilder’s “The Matchmaker” daily when she was still a student at the Royal Academy of Dramatic Art (Rada) in London years ago.

At the time, we were New Voice’s workshop director, so as part of our “continuing education” as a teacher and director, we were invited by exceptional drama teachers/directors, Dee Cannon and Monique Wilson, to observe how theater productions were being “cooked up” at Rada. Other memorable lead-actress portrayals: Emma Thompson (as an aging talk-show host in “Late Night”), Cate Blanchett (as a gifted but reclusive architect in “Where’d You Go, Bernadette?”), Julianne Moore (as a lovestruck divorcee in “Gloria Bell), Debbie Honeywood (as a cash-strapped home care nurse in “Sorry We Missed You”), Awkwafina (as a struggling writer dealing with impending death in the family in “The Farewell”), Beanie Feldstein (as a plus-size high school valedictorian in “Booksmart”), Jessie Buckley (as a troubled country singer in Glasgow in “Wild Rose”) and NYFC/LAFC’s top choice Lupita Nyong’o (as a mother with a doppelganger in “Us”). We also believe that if Elisabeth Moss, who’s a force of nature as a self-destructive rock star in “Her Smell,” only made the cut, she could have given Renee a good fight. Brad Pitt (as a stuntman and body double in “Once Upon a Time…in Hollywood”) and Laura Dern (“Marriage Story”) appear to have a lock on the best supporting actor and actress prizes. Brad was the top pick at the SAG, Golden Globes, Bafta, Critics’ Choice Awards and the National Board of Review, while Laura emerged on top at the SAG, Golden Globes, Bafta, New York Film Critics and Critics’ Choice Awards. 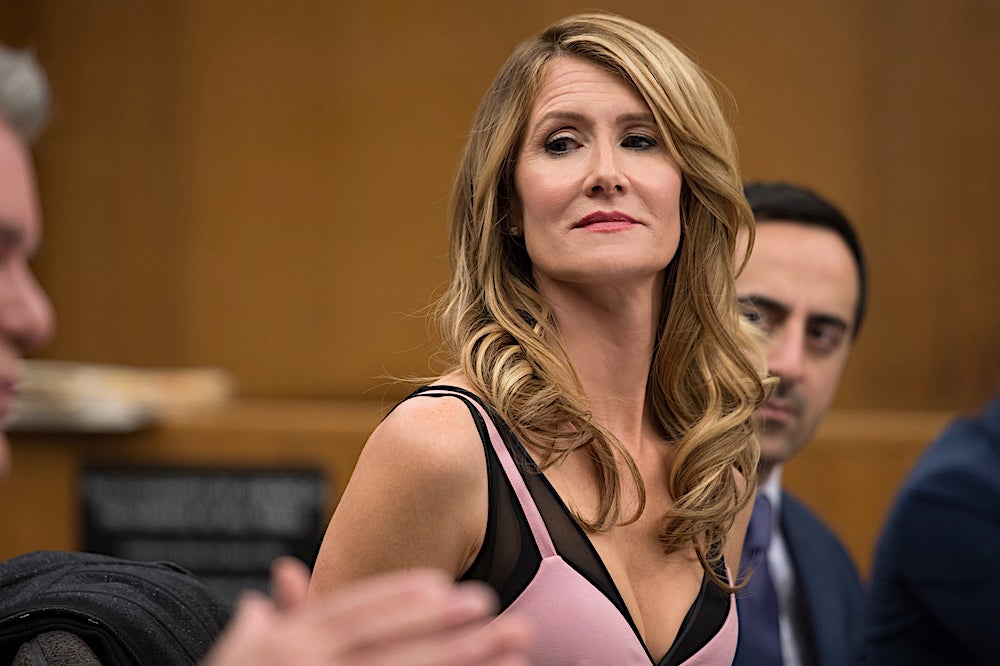 Completing the list are Tom Hanks (lovable, as always, in the role of children’s show host Fred Rogers in “A Beautiful Day in the Neighborhood”), Al Pacino and Joe Pesci (both unforgettable as labor union leader Jimmy Hoffa and crime boss Russell Bufalino, respectively, in “The Irishman”), and Anthony Hopkins (striking as Pope Benedict XVI in “The Two Popes”).

Just as worthy of supporting-actor citations are Matt Damon (as automotive designer Carroll Shelby in “Ford v Ferrari”), Jamie Foxx (as a man convicted of a crime he didn’t commit in “Just Mercy”) and Shia LaBeouf in two delightful performances (as an abusive father in the autobiographical drama “Honey Boy,” and a troubled thief who befriends a young man with Down syndrome in “The Peanut Butter Falcon”).

For best supporting actress, Laura Dern (as a ruthless divorce lawyer in “Marriage Story”), who won at the SAG, the Golden Globes, Bafta, the New York Film Critics and the Critics’ Choice Awards, looks like a shoo-in for the top plum in her category.

The actresses standing in her way are National Board of Review winner Kathy Bates (as the protagonist’s supportive mother in “Richard Jewell”), Scarlett Johansson (as the young boy’s secretive mother in “Jojo Rabbit”), Florence Pugh (as Amy March in “Little Women”) and the versatile Margot Robbie (magnificent as a sexually abused employee in “Bombshell”).

For supporting actresses, we were also impressed by the performances of Annette Bening (as a senator investigating the CIA’s use of torture following the 9/11 attacks in “The Report”), Nicole Kidman (as Gretchen Carlson in “Bombshell”), Margot Robbie (as starlet Sharon Tate in “Once Upon a Time…in Hollywood”) and Jennifer Lopez, who should have gotten an Oscar for her role as an aging stripper in “Hustlers.” 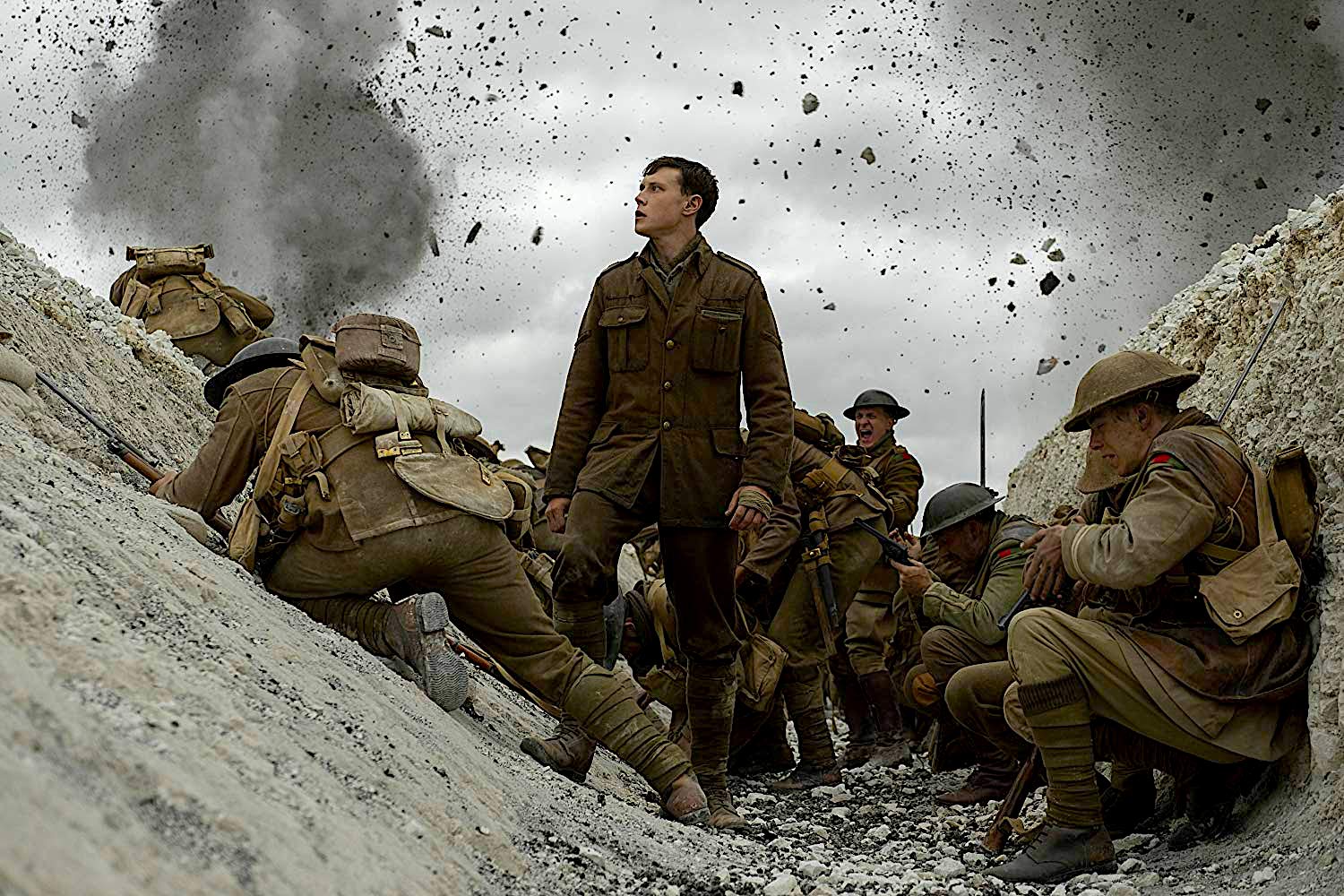 With nods from the Producers Guild, Directors Guild, the Golden Globes, Bafta and the LA Film Critics’ Awards, Mendes and his groundbreaking war film are tipped to win best director and best picture, respectively—with good reason.

But the exquisitely crafted and compellingly acted dark “dramedy” “Parasite,” which won SAG’s coveted ensemble prize and the WGA’s top plum (along with “Jojo Rabbit”), just might rain on “1917’s” award-reaping parade. So, it’ll be foolhardy for Bong’s film to give up the fight just yet, because it appears to be the only one standing in the way of “1917’s” “anointed” victory.

For what it’s worth, we think “1917” should bring home Oscar’s top prize not only because of its scope and thematic pertinence, but also because of the degree of difficulty that Mendes manages to pull off.

But, as with how top awards are “distributed” at Cannes, Bong Joon-ho should romp off with the best director plum for stringing the complex elements of his film with astute precision, aplomb and delicious menace.

What about you, dear readers? Who are on your winners’ list?