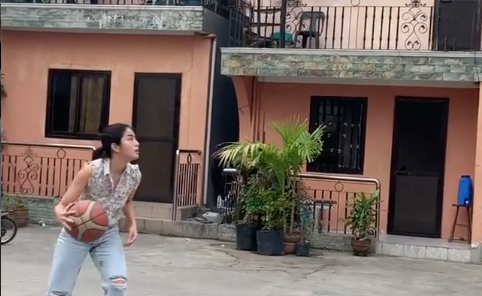 Volleyball star and television host Gretchen Ho also has some skills to spare in the basketball court as she showed off her shooting prowess in Bulacan.

The TV host dedicated her short hoops session to the late Gianna Bryant, or Mambacita, the daughter of the legendary Black Mamba, Kobe.

“Running into the weekend be like… When I see a ball, I just can’t resist,” Ho said on Instagram earlier today, Feb. 7. “This one’s for Gianna!! #Mambacita.”

The TV host seemed to be in heat as she landed five out of five consecutive shots from mid to short range, as seen in the video.

It is no secret that Ho has basketball skills, and her pre-UAAP hosting “warm-up” video back in March 2019 proves this.

Ho was one of the local celebrities who mourned the sudden deaths of father and daughter Kobe and Gianna. The two died in a helicopter crash along with seven other people on Jan. 26.  /ra

Read Next
WATCH: James Reid, Nancy talk about their road to acting at ‘The Soulmate Project’ workshop
EDITORS' PICK
‘Not yet the end’: Lawyer says Marcos Jr’s DQ cases to take lengthy process
The best of bayside and city living at SMDC’s Sail Residences
Acer starts the year off strong with the Aspire Vero National Geographic Edition
Over 3 Million worth of prizes to be won at Smart Padala’s SENDali Manalo Promo!
Critical scenario: 3 Comelec vacancies just 3 months before elections
PH logs 37,070 more COVID-19 cases; over 33K others recover
MOST READ
Duterte asks: ‘Is COVID-19 airborne?’ Duque blames spread on ‘token compliance’ with rules
Morissette Amon recovering after confinement for diverticulitis, tests positive for COVID-19
‘Not yet the end’: Lawyer says Marcos Jr’s DQ cases to traverse lengthy process
Marcos camp ‘extends hand of unity’ after COC cancellation bid is thrown out
Follow @IBiongINQ on Twitter
Don't miss out on the latest news and information.