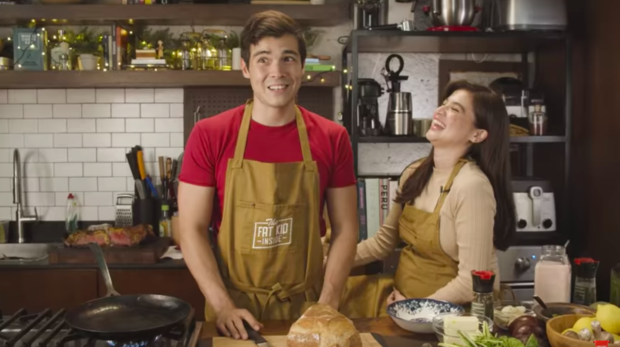 Anne Curtis and Erwan Heussaff have been a couple for 10 years, but it was only recently that the actress saw her husband in action while filming his cooking vlog.

“This is my first video dedicated to my wife and our future little child in there,” Heussaff said patting her belly.

Though Curtis did not cook, she gave input on the recipes, such as her preferred flavors on the avocado toast which Heussaff makes to satisfy her pregnancy cravings.

The “BuyBust” star shared that she likes her avocado toast with lemon or chili flakes and would rather not have it with olive oil.

She also brought a belly full of laughter while he was at work, as she and her husband bantered with one another.

For instance, Curtis took a jab at him for speaking only English, but eventually, he got back at her.

While he stirred garlic in butter on a cast-iron pan, he asked her to translate garlic in Tagalog. “Garlic,” she insisted, then blurted out, “Sibuyas!”

When she was told she was wrong — sibuyas is Filipino for onion — she roared with laughter, to which Heussaff could only say, “She’s going crazy.”

“Now the Philippines knows why I don’t speak Tagalog. This is my teacher,” he quipped.

Curtis shared snippets of the video on her Instagram, particularly her moments of uncontrollable laughter.

(I don’t know but it’s as if my laugh is different while I’m preggers. The joy and feeling are different, as in laughter feels good.)

“Maybe it’s a preggo thing?” she wondered. “Or maybe it’s also because I’m with the person who can make me THAT happy uyyyy again!” JB