‘Passage to Abu Dhabi’ on TLC 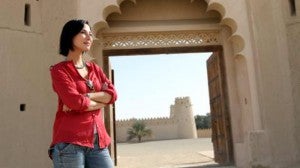 MTV VJ Denise Keller travels to Abu Dhabi where she discovers more of Arab culture and its people in the two-part “Passage to Abu Dhabi” to be aired on TLC on April 16 and 17 at 8 p.m.

Keller will feature the capital which occupies more than 80 percent of UAE and is commonly perceived to be veiled in mystery.

She will tell Abu Dhabi’s story through the eyes of its people who showed her around their capital with its majestic sand dunes and towering skyscrapers.

In a phone interview with the media, she said that it took her roughly three months to produce the two episodes to be shown next week.

Keller likes traveling and said that Dubai would instantly come to her mind whenever she would think of the UAE. Prior to producing the two-part feature, Keller said that she had never seen Abu Dhabi.

“I had no idea what I was getting myself into. I didn’t know what to expect – whether the people would open up and show me around.”

The first episode of the two-part series, The Gateway, will paint a picture of Abu Dhabi as a cosmopolitan city proud of its excellent mix of tradition and modernity. Testament to this is its architectural marvels – from skyscrapers to the largest mosque in the UAE, the Sheikh Zayed Grand Mosque.

Keller said that she would also show viewers Abu Dhabi’s summer destination Al-Ain, also called the Garden City of Abu Dhabi, which is popular for those wanting to cool off from the desert’s heat with its oases and lush greenery.

Keller also discovered Abu Dhabi’s love for speed not only in the form of cars but particularly through the fastest roller coaster in the world.

“They weren’t kidding when they said it was fast! It was really an out-of-body experience. It’s better than coffee and such an adrenalin kick.”

“You get to be an F1 racer for several seconds,” she told reporters in jest.

To cap off the first episode, The Gateway will also showcase the UAE’s 40th National Day which Keller described to be a “big national day celebration.”

Keller will look deeper into Abu Dhabi’sculture and identity in the second episode of Passage to Abu Dhabi: 360.

She will give viewers a taste of the capital’s romantic Rub al Khali desert also called the “Empty Quarter” in literature. She joked that she felt much like Lawrence of Arabia in the middle of the sand dunes. “It was Denise of Arabia.”

Viewers will also see the kind of bond Emirati share with animals through Keller’s experiences in falconry, and meeting the horses in the Arabian Desert, topped off with her desert experience: camels.

She ends her two-part series on magnificent Abu Dhabi with Al Dhafra Camel Festival where the popular desert animal is showcased in a sensational camel beauty pageant.

Keller described her entire experience in filming the two episodes to have been “such a joy”, pointing out that it eventually changed the way she saw UAE where she thought she’d seen all through another one of its more popular spots – Dubai.

If people thought they’d seen it all if they have visited Dubai, Keller said that such a perception would change once they got to see what Abu Dhabi had to offer.

“You can’t compare the cities anymore… Abu Dhabi is the perfect juxtaposition of the old and new,” she avidly told reporters, describing the capital city as to having just the right amount of modernity while still being steeped in Arab history and culture.

One pleasant surprise during her stay in Abu Dhabi was the way its people welcomed her, she said, adding that “everyone was very inviting, it was overwhelming. I thought they were kind of conservative and private but they weren’t.”

But as Keller realized, she said those from Abu Dhabi just valued their privacy, and that despite this, the locals were very helpful during her stay.

“Everyone was really friendly and generous in showing me around and in making me understand their culture,” she said.

“I’m just a side passenger, the true presenters [of Abu Dhabi] are the people. I’m invited for the show to see how they view their country. It’s not my story but theirs.”