Comedy is no laughing matter for Josh Gad 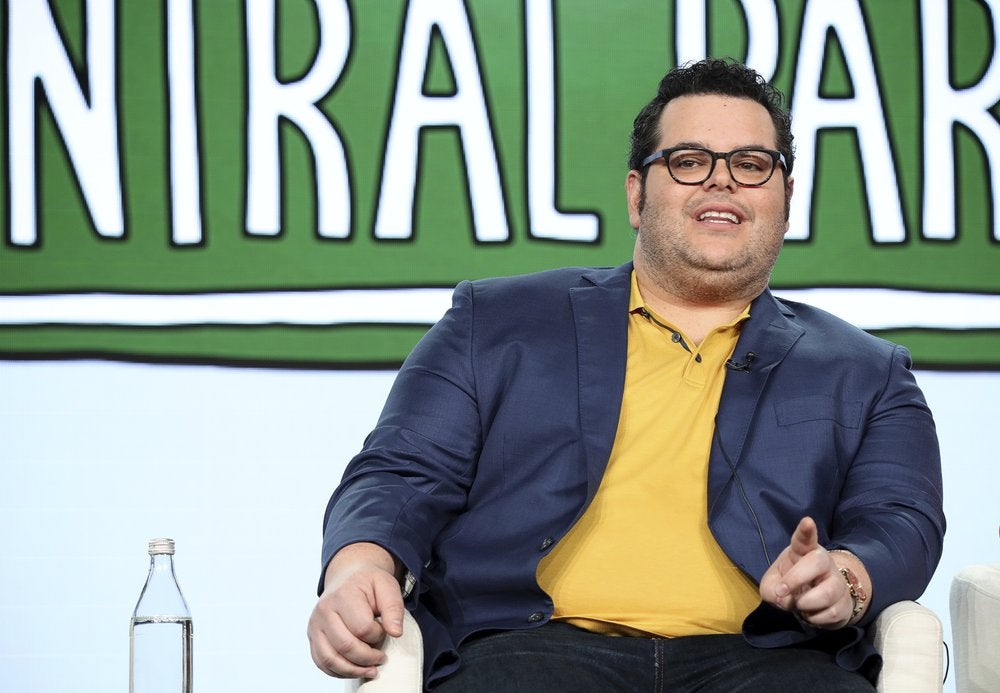 You don’t always find Judi Dench spoken in the same sentence as Disney’s “Frozen” or the laugh-out-loud musical-theater comedy, “The Book of Mormon.”

But Josh Gad wasn’t just fortunate enough to have worked with the 85-year-old acting legend (in Kenneth Branagh’s 2017 revival of “Murder on the Orient Express”), he also lucked out with the roles of Olaf in “Frozen,” LeFou in “Beauty and the Beast,” and Elder Cunningham in the original Broadway production of “The Book of Mormon,” in 2011.

The 38-year-old actor-comedian is currently making viewers sit up and snicker in his portrayal of loopy and delusional billionaire Herman Judd in the space-tour-gone-awry sci-fi comedy series “Avenue 5” (Mondays at 11 a.m. on HBO and HBO Go).

When we spoke to Josh for this Inquirer exclusive last week, he just didn’t demonstrate the sly humor lurking under his wholesome demeanor and nice-guy exterior, he also proved that the best sort of comedy comes with a certain responsibility. Yes, for the truly comedically gifted, comedy is no laughing matter.

Josh’s humor didn’t just come out on a whim, however—in fact, it served as a coping mechanism for his 6-year-old self. This we found out when we asked him when he first realized he had it in him to make people laugh.

“I would say that I knew comedy was a significant ‘weapon’ when my parents separated from each other. I was very young when I realized that comedy or humor was a way to bring happiness and joy into the environment in my home. I was about 6 years old then.”

His sense of humor continued to unravel in school. “I was the quintessential class clown,” he recalled with a laugh. “I remember my mother being called to school one day because of the way I greeted my teacher, who said, ‘You know, your son comes to class late, and when he walks in the door, he looks at me and says, ‘Hiya, Toots!’—which was completely inappropriate (laughs). I’m not sure where I even got that catchphrase as a 7-year-old!

“I was somebody who was skirting with comedy at a very young age, so I knew I was on a good path when I did a show on Broadway called ‘The Book of Mormon,’ which was a big break for me.” Even Dame Judi Dench couldn’t resist Josh’s sense of humor the first time they met each other on the set of “Orient Express.”

Josh wants his colleagues to feel welcome—even the highly touted likes of Judi and their costars Michelle Pfeiffer, Penelope Cruz and Willem Dafoe.

Asked how he managed to break the ice in the midst of all that stellar company, the actor said, “Well, you realize that we’re all just people. At the end of the day, a celebrity goes home, sleeps on a bed, wakes up with bad breath in the morning, takes a shower, walks the dog and runs errands—they’re just human beings like us.

“I always try to find an opportunity to make those first meetings a fun experience. I remind myself never to approach them with such reverence, because that would make them unapproachable. With somebody like Judi, for instance, everybody was so scared to talk to her on the first day of the shoot because she’s such a legend.

“But instead of shying away from her, I did something probably really stupid at the time, but at least it paid off. I went off to her, but instead of saying, ‘Dame Judi,’ I said, ‘Damn, Judi!’ She couldn’t help but keel over with laughter—and it became an immediate friendship that blossomed from that ridiculous ice breaker.” 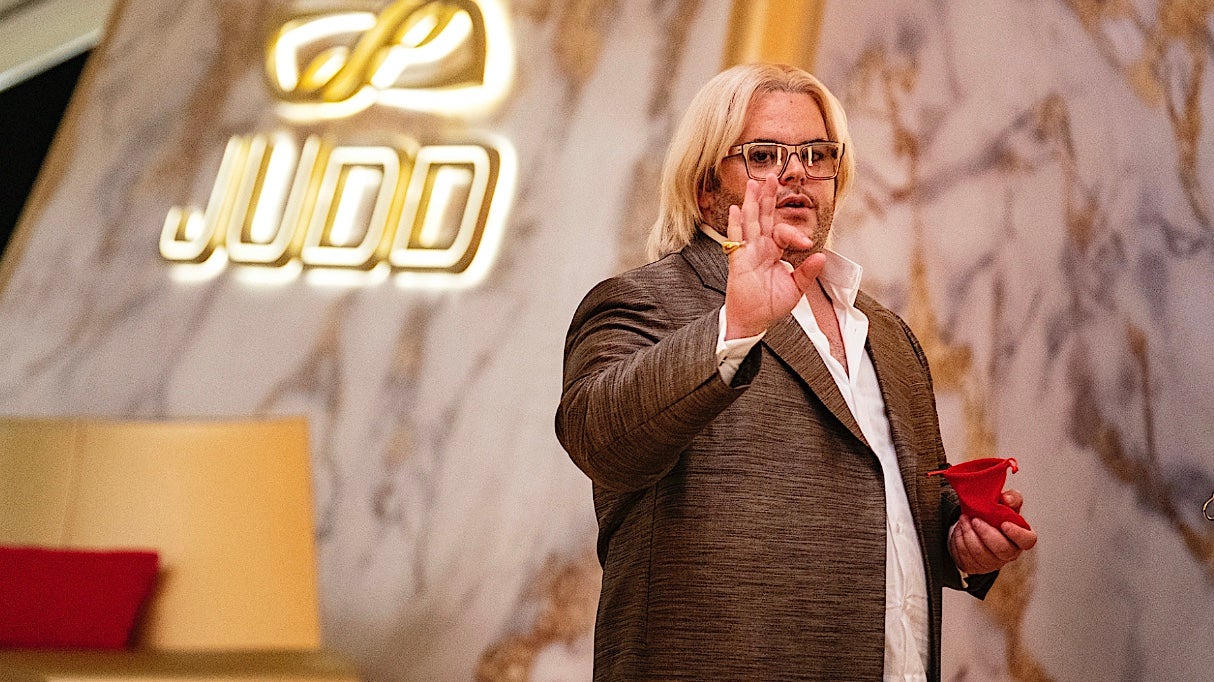 Our Q&A with Josh:

You play a delusional billionaire in “Avenue 5.” How did you create the role?

Unfortunately, there are a lot of people I could base it on in real life. So, my research led me to a lot of modern-day entrepreneurs cut from this cloth of really good sales people without necessarily having anything worthy of selling.

I thought of people like [convicted fraudster] Billy McFarland, who created the Fyre Festival, which was a disaster. (He defrauded investors of $27.4 million.) Then, there’s [Stanford dropout] Elizabeth Holmes of the now-defunct health care company Theranos.

I wanted a character who was all-talk, but not necessarily somebody who actually had the means to deliver the goods. Herman’s look was defined by the idea of some of those entrepreneurs, who tried to put out a version of themselves as successful businessmen.

In the case of Elizabeth, for instance, there was this story that she bought all of these mock turtleneck [outfits] that she would wear constantly to evoke the image of Steve Jobs.

But Herman’s look is really a mixture of ideas and inspiration. With Herman, I wanted [to give him] the image of British business magnate and Virgin group founder Richard Branson.”Set 40 years in the future, the show transports viewers into a world where space travel has become accessible to humans who can afford space-tourism packages offered by Herman’s company (Josh).

But the eight-week cruise on the spaceship Avenue 5, headed by “fake captain” Ryan Clark (Hugh Laurie) hits a snag when its orbit around Saturn is derailed by a “gravity flip” that changes the course of the trip back to Earth—between six months to three years!

How did you end up with the role?

I have been obsessed with Armando Iannucci, the creator of the series. I first discovered his brilliance by watching the [British comedy series] “The Thick of It” and “Veep,” which became a sensation in the States. Then, there’s his incredible black-comedy film “The Death of Stalin,” which I think is one of the great satires of the last decade, and his most recent film, “The Personal History of David Copperfield.”

I’ve been wanting to work with him for a long time, and I heard that he was doing a new series. I read the script and thought it was deliciously insane, having the same satirical brilliance of his previous works. 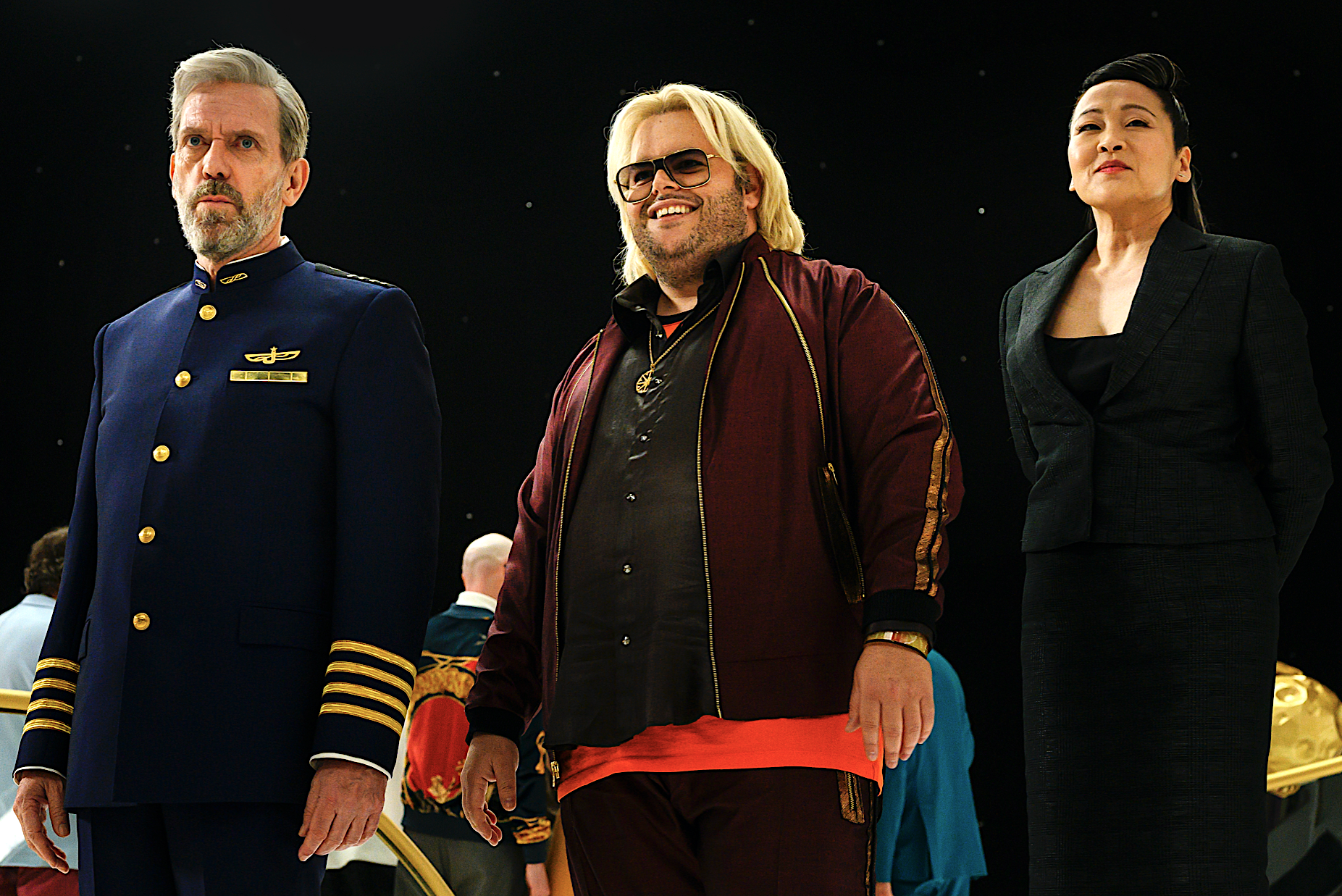 From left: Hugh Laurie, Gad and Suzy Nakamura in “Avenue 5”

What was the biggest challenge in playing Herman?

One challenge was, how do you play somebody who’s seemingly so stupid be so successful as a businessman? How do you make somebody who, on the surface, is the dumbest man in the room come across as someone worthy of having all the amount of money he has?

The key to that is overconfidence. We see this over and over again with people in politics—they’re full of bluster, even if they don’t have anything to back it up. I wanted to create a character who so deeply believes in himself that he couldn’t see through the haze the fact that everybody around him gets the sense that he’s really a fraud!

And because he’s so confident, that confidence becomes contagious. Finding that balance is the most challenging thing in making him somebody who could be incredibly dumb on the surface, but also that you’d believably say, “OK, I understand why he has that kind of success.”

In real life, do you want to travel through space?

I don’t want to travel through space at all! The very idea of that makes me anxious. I am very happy on Earth, and I’d like to keep my feet on the surface of the planet for as long as I can, So, any trip to outer space in the foreseeable future is going to have to take place without me.

The show takes an interesting look into what the future can potentially be. It’s fascinating that film and TV have taken an approach that often presents a rather bleak version of the future, as opposed to the ideas that I grew up with—which was that any representation of the future seemed like full of hope and optimism.

Now, there’s so much dystopian quality to how we portray the future onscreen. Sometimes, I feel like we’re headed down that dark imperialist road if we don’t look at the signs and think to ourselves, “Oh, maybe we should be better caretakers of the planets.”

Maybe we should be less obsessed with gold and gilded statues, and more focused on how science and technology can benefit those of us who don’t necessarily have the means to have accessible food and health care. I do feel similarities in this comedy that could represent a version of where we’re headed if we don’t start to take action. 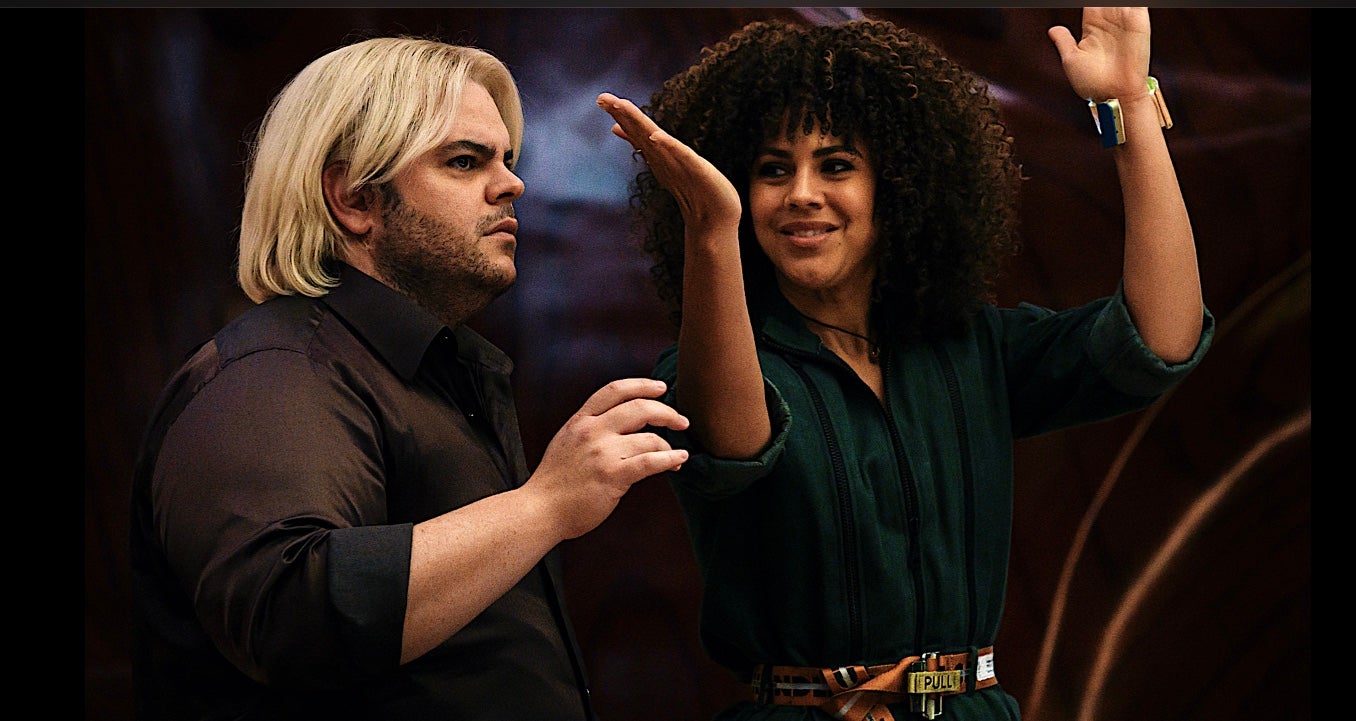 What would you do if you were a billionaire like Herman Judd?

I would probably jump off a tall building (laughs). Herman is somebody who has no edit button. He says whatever comes to his mind, and that’s part of the difficulty of playing a character like him. As an actor, you would have to see him as sympathetic and find something relatable.

If I were an industrious billionaire with long blond hair, I would like to hope that somebody would slap me in the face and say, “You need a different hairdo (laughs) and think about not opening your mouth all the time. Leave it to people who are much more qualified.”

In one interview, you said that working with Hugh Laurie is a pain in the ass. Care to elaborate?

(Laughs) Hugh Laurie is the single most perfect specimen of a human being I’ve ever met in my life. He makes everything look easy and effortless. I’m literally in awe of how incredibly brilliant he is and at his expertise with so many different things.

The man rides to work on a motorcycle every single day. He plays these incredibly complex pieces of music that he composes on a piano. He has an answer for any question that you could possibly imagine asking. I feel completely inferior in his presence.

Hugh is a man of all trades, while I’m a man of maybe one and a half trades (laughs).