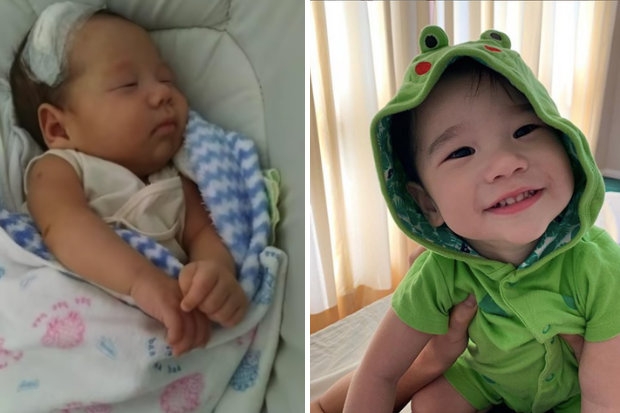 Actress and musician Saab Magalona told fans about the “origin story” of the superhero that is Pancho, her baby boy, who has been fighting for survival since birth.

The doting mother recalled Pancho’s bouts with several life-threatening conditions, and how the baby bested these challenges in a video Magalona uploaded on her YouTube channel yesterday, Jan. 29.

In 2017, Magalona was pregnant with twins: Pancho and Luna. Her due date was supposed to be April 2018, but the mother “wouldn’t stop bleeding” in February, when they lost Luna.

“Our baby girl’s heart stopped beating,” Magalona said. “The doctors decided to do an emergency operation to try and save our boy. [Afterward], Pancho and I were both in critical condition.”

Magalona recalled how after she and Bacarro have said their goodbyes to Luna, the doctors advised the couple to say goodbye to Pancho as well.

“They said it looked like he wasn’t going to last the night,” she stressed. “But like a superhero, Pancho fought.”

Although Pancho outlived the doctors’ expectations, Magalona said the premature baby boy went through a lot of complications in the newborn intensive care unit (NICU).

For one, Pancho had ventriculitis, the inflammation of ventricles in the brain.

“I cried so hard when the NICU doctor told me to prepare because Pancho will 100% have some form of disability,” Magalona said.

To add to his already serious condition, Pancho also suffered from pulmonary hypertension, which made it hard for him to breathe; sepsis, a life-threatening condition caused by severe blood infection; and grade 4 intraventricular hemorrhage, which is severe bleeding in the brain.

Magalona revealed that at just 17 days old, Pancho already had to undergo brain surgery. After 58 days in the hospital, however, the family was allowed to go home.

After a month, there was no more buildup of fluid in Pancho’s brain, so the baby boy underwent brain surgery once again to have his shunt removed and “Pancho handled it like a champ.”

When Pancho turned 1 year old, the parents noticed how Pancho appeared to have complications in the eyes as Magalona recalled that he would not make eye contact with them, or even follow objects with his eyes.

After several tests, the parents found out that Pancho’s eye structure was fine, but noted that his brain injury may have affected his vision.

“Doctors said that he was possibly blind, and just as Jim and I were slowly trying to accept it, he suddenly followed a toy with his eyes,” the mother said.

After overcoming this battle, Pancho was presented with another one: he was told to “not have any motor skills,” and was possibly not going to be able to even roll over.

“At first, superheroes think that their newfound powers are a curse, but it’s only because they’re not done figuring it out for themselves,” Magalona added.

Pancho continued to show cognitive skills “that exceed expectations,”  and has even “made a number of his doctors cry.”

“So when you see us, don’t feel bad that we’re going through a different path than most families. Remember: he wasn’t even supposed to make it through the night,” the mother said.

Pancho, now healthier than before and still bringing smiles through updates from “#DailyPancho,” is an elder brother to Vito. The little “superhero” is going to turn 2 years old this Feb. 8. JB