Things Snooky and Dina would want to change about their past 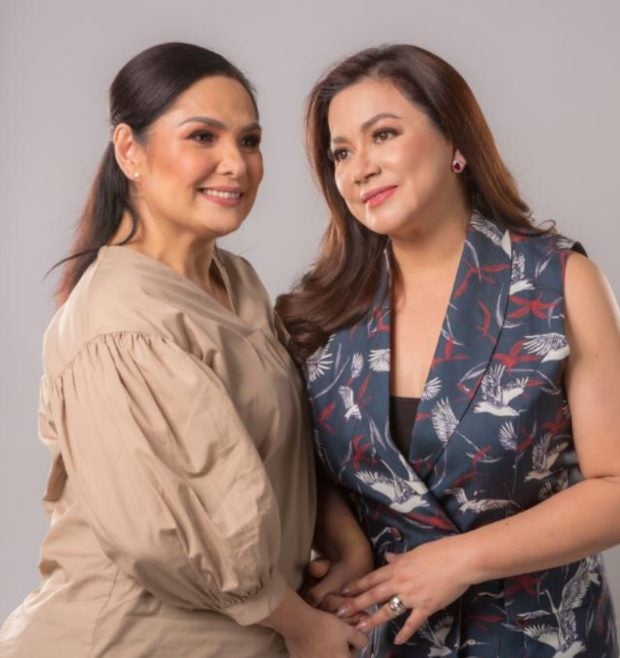 Dina Bonnevie and Snooky Serna were the “It girls” of the ‘80s. To this day, they have not lost their charms. Both of them ought to give a crash course on how to age gracefully. The seasoned actresses reunite onscreen in GMA 7’s adaptation of Regal Films’ 1984 hit movie, “Anak ni Waray vs Anak ni Biday” (weeknights after “24 Oras”).

The engaging series centers on the feud of Biday Sussie from Ilocos and Waray Amy from Leyte. The former best friends turn into mortal enemies when they fall for the same guy who knocks them both up. Welcome to “frenemies zone.” Get ready to rumble.

Here’s my chat with Dina and Snooky:

What’s your fondest memory of working together in the ’80s, and what are you looking forward to your collaboration now? Dina (D): During our younger years, we talked about crushes and teen stuff. It feels good that Snooky and I can pick up from where we left off. It seems that no time was lost. I look forward to our catching up on each other’s lives, especially what happened “in between” the years since we last worked together. I’ve discovered now that “palaban” din pala si Snooky. Beneath her shy persona is a “rock star.”

Snooky (S): When we did the movie “Underage” with Maricel Soriano, I found out how funny Dina can be. She’s even more “kalog” than Maria. I look forward to rekindling our friendship and how we will feed off each other’s energy on the set.

If you could relive your past, what would you want to change? D: I wish I didn’t get married so early. I was only 19 at the time. But I’m happy I had Danica and Oyo at a young age. At least I just look like their “ate.”

S: I will get rid of my hang-ups, which affected my personal life and career.

Is it harder for you to make people laugh or cry? S: I can’t pinpoint which one because both are hard. It really depends on the sensibilities of the audience.

In what way can you relate to your character in the series? D: Since the character I play, Sussie, is an Ilocana, I can relate since I’m married to an Ilocano. Even if I’m Bicolana by birth, I’ve become an Ilocana at heart. Just like Susie, I’ve had thwarted love affairs. I guess all of us have episodes of “naudlot na pag-ibig.”

S: Just like Amy, I have inner strength. When push comes to shove, I fight for what’s right. I may seem meek and mild, but I’m not the type who will suffer in silence.

What’s more important to you, TV ratings or reviews about your acting? D: Both. Even if I turn in a great portrayal, it’s useless if not too many people watch my show. It’s flattering to get positive feedback, but good ratings matter because that makes me feel that the public still wants me. S: Both matter to me since I’m a businesswoman and an actress.

What makes your marriage work? D: Less expectations, daily adjustment, putting God at the center of it. Letting each other grow without growing apart. A husband and wife must be like two plants in different pots. You give each other space to bloom. If you put two plants in the same pot, one will strangle the other.

D: The year 2019 taught me patience and perseverance while I was helping my husband during the elections, and to trust in the Lord more when my dad was in and out of the hospital. This 2020, maybe I’ll try skydiving, which I’ve always wanted to do, though I’m wary because of my age. I want to travel with my husband’s kids/grandchildren, Oyo, Danica and their kids, so we will be one big happy family exploring new places together.

S: I want to have a childlike attitude and have less fears. I want to become sporty and try bungee jumping, zipline and rock climbing. I plan to explore India.

How do you handle it when you’re working with a ham actor? D: I tried helping out a ham actor once, but our director reprimanded me. He told me to leave the directing to him. So hands off na ako. What I do is I level up my acting, so the ham actor will be challenged to match my intensity.

S: I don’t think there are ham actors. Just actors and non-actors. Maybe some just don’t have the passion, or are really not meant to be on-cam. Come to think of it, we are all actors because we all know how to lie. Acting is pretending. Not all of us have the inclination to act, though.

What has fame taught you?D: Fame must not make us proud or boastful. Fame is borrowed and not for us to keep forever. It’s the fans who hold the key, not us actors. God made me famous for a purpose, and I leave it to Him to lead the way. S: Humility and gratitude. Not to waste my God-given talent. To use fame for a higher cause.

If your life story would be made into a movie, what would the title be?D: “D.I.N.A.” (D-reams, I-deas, N-otions, A-necdotes). Just to share some trivia, I used to dream of becoming a nun or a race-car driver. I want Lovi Poe to portray me because I like her style. And when I was her age, I also had a 22” waistline like she does.

S: “Bulilit Cinderella.” That’s also the title of one of my movies when I was a child star. Since I started acting at the age of 3, I became an overnight Cinderella. INQ