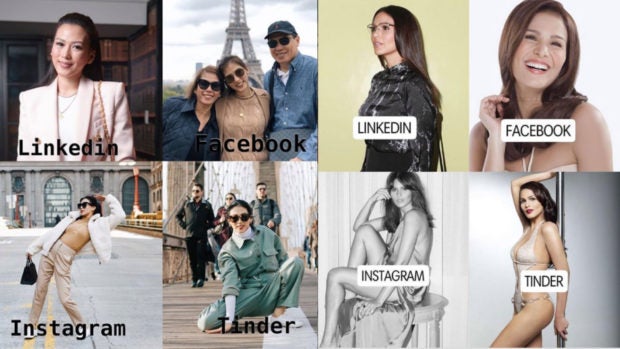 It appears that celebrities are taking on the challenge of categorizing their social media personas into four different types. Actors such as Alex Gonzaga, Iza Calzado, Maymay Entrata and more took their own interpretation of the ‘LinkedIn, Facebook, Instagram, Tinder’ meme.

The meme pokes fun at the different social networking sites’ functions, to depict how one person might appear different in their different accounts per site. Some of the celebrities’ hilarious takes on the meme show large contrasts between their “professional” personas in the job-oriented site LinkedIn versus their would-be look on the online dating app Tinder.

Newly engaged vlogger Alex Gonzaga took her interpretation of the meme on her Instagram account yesterday, Jan. 25. Gonzaga was dressed in a light pink blazer on the LinkedIn portion of her collage while she included her parents on the Facebook section of the meme.

Gonzaga slanted her body to strike a pose for the Instagram part, while the comedienne was sitting with her legs spread open for the Tinder portion.

“Sa Tinder wala ng hiyaan dapat mapakita mo na… (On Tinder, you should not have any shame, just show it [all],” Gonzaga joked.

Calzado wore specs for her LinkedIn look while she was all smiles on the Facebook portion. The “Culion” movie actress looked sultry and glamorous at her black and white fashion shot for the Instagram part.

Meanwhile, Calzado wore a bedazzled bikini while leaning behind a pole for her take on the Tinder portion.

Thanks for the inspo, @dollyparton @jennifer.garner ❤️ Finally got my profile photos right. 😜 @izadoration 📸

Actress Maymay Entrata’s take on the meme is a simple selfie collage presenting her different expressions depending on the platform, as per her Instagram post yesterday, Jan. 25.

The “Pinoy Big Brother” winner gave a rather straightforward smile for her LinkedIn persona while she stuck her tongue out and showed a portion of her shoulder for the Tinder portion.

Comedienne Rufa Mae Quinto also joined in on the meme trend. The actress did away with her usual sexy look by wearing large glasses and appearing to be in the middle of a meeting on her LinkedIn photo.

Quinto’s Tinder shot revealed a more daring side of the actress, wearing nothing but a gold top while donning a floral headpiece, as seen on her post yesterday, Jan. 25.

Actor Jak Roberto also took a shot at his own interpretation via Instagram last Saturday, Jan. 24. Roberto wore a green blazer with matching green pants for his “professional” look on LinkedIn, while his Instagram shot was taken behind a picture-perfect snowy backdrop.

The actor then showed off his muscular body by going shirtless on the Tinder portion of his post.

The meme’s trendsetter appears to be legendary singer Dolly Parton, who took some of her photos to depict her personas in the different social networking sites.

Parton dressed like a professor, posing behind the chalkboard while a pencil was stuck to her hair, for her LinkedIn entry. She wore a fitted knitted sweater for her Facebook photo, while her Instagram take was a throwback of her earlier days as a musician. Parton then dressed up as a sexy bunny for her take on Tinder, as seen on her post last Tuesday, Jan. 21.

Hollywood celebrities and international musicians followed Parton’s suit in uploading their own take of the meme, while international media later referred to the meme as the “Dolly Parton Challenge.”

Get you a woman who can do it all 😉

Parton said, “Get you a woman who can do it all.” JB