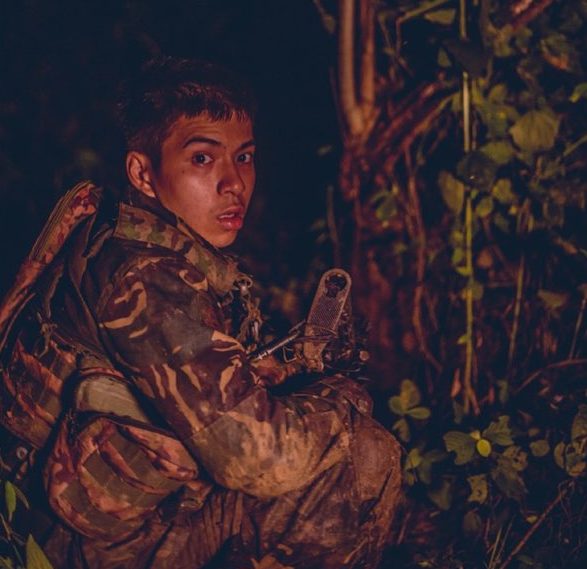 Nash Aguas in “A Soldier’s Heart”

“A Soldier’s Heart” cast member Nash Aguas, who came close to quitting during their three-day military reservist training, said the reason he got persuaded to get back into training could be summarized in one word: hopia.He was only on his first night of training when Nash said he thought all the hardships were “no longer worth it.”

They were given their dinner in a plastic container and, while eating, were told to lie on their bellies. Coactor Elmo Magalona accidentally kicked Nash’s plastic bag of food, which caused it to spill on the muddied floor.

“I already accepted that I’d be hungry for the rest of the night, but our instructor said I should eat the food even if it was already wet and full of mud,” Nash recalled. “He said that if I’m in an actual war, I’d die of hunger if I didn’t eat what’s served to me. I had no choice: I ate it, or else, I’d get punished physically.”

Nash added: “It was at this point when I said, ‘Grabe naman ito!’ I felt I was treated like a dog. I was close to tears when I was swallowing dirty food. I said, ‘It’s no longer worth it. Call me weak, but I can’t take this humiliation any longer.’ I hid in one of the rooms, but people found me eventually and pulled me out.”

What really made Nash decide to rejoin the training was a simple act of kindness that he experienced from his fellow trainees.

“You see, our group joined an actual scout ranger training, so this meant that there were trainees there who would eventually end up as real soldiers,” Nash recalled. “These soldiers in training had secretly passed on, hand-to-hand, a small piece of hopia until it reached me. They risked getting caught and being punished just so I’d have something to eat. They placed my welfare before theirs. That was really amazing!”Nash said he also got to talk to the officers, who told him “there’s a reason for everything we’re making you do, all the hardships that we’re making you experience. You just have to trust us. ‘Di namin kayo pinagti-trip-an. It’s all a matter of perspective.”

The actor continued: “My attitude has always been this, that if I know I’m right, I would not swallow my pride and apologize to anyone. But at the time, I learned the true meaning of humility and patience. They crushed us, but made us whole again afterward. I learned so much from my experience there.”

His experience in the camp was life-changing, according to Nash.

They learned all sorts of useful stuff like patrolling, marksmanship, climbing mountains, making tents and putting them up, assembling guns, as well as learning all the military terminologies.

They trained for three straight days, with only two hours of sleep each day.

“And since we were with actual scout rangers, we can’t be given special treatment. We slept in wet and dirty clothes for three days. We smelled like soil,” he said, adding that, while in training, his costar Jerome Ponce suffered from a knee injury, and Yves Flores, from blisters.Nash claimed he now has renewed respect for Filipino soldiers.

“I didn’t want to become one before. It’s really the idea of going to war and not being able to return home alive anymore. After our experience there, I’ve learned to like being a soldier. I got even more interested when I learned about the lives they lead,” he pointed out. “It’s unfair that while they’re all out there, we’re living so comfortably and not caring.”