Jon Hamm mad about his girl 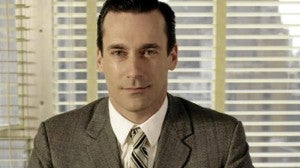 “We make up for each other’s deficiencies very nicely,” Jon Hamm said of his durable relationship with Jennifer Westfeldt, his girlfriend of 15 years.

In a recent interview, the “Mad Men” star explained how he and Jennifer have stayed together and now, how they are surviving the challenges of working on an indie film, “Friends With Kids.” Jennifer wrote, stars in and directs the movie that also features Adam Scott and Maya Rudolph.

“Friends…” is also Jon’s latest project. He told us, “If I’m proof of anything, it’s that it only takes one yes.” He was referring to his struggling years in Los Angeles, where he worked as a waiter and set a self-imposed deadline to make it in Hollywood when he turned 30.

If that didn’t happen, Jon planned to return to his native Missouri where he taught acting class at his high school alma mater (“The Bridesmaids” and “The Office” actress Ellie Kemper was his student). Jon has been quoted saying that he did not want to end up as “one of those actors who are 45 years old, with a tenuous grasp of their own reality, and not really working much.”

The “yes” in Jon’s life came with a role in the drama series “Providence,” which led to several breaks, including his landmark role in “Mad Men.” His portrayal of an ad exec earned him a Golden Globe trophy for best actor in a TV drama. Now 41, it doesn’t look like Jon will be returning to Missouri anytime soon!

For a lot of women, you are the sexiest man in the world. What do you think?

You need an internationally famous television show in which you’re the star. And you need an award-winning writer to write really good lines for you.  With those two things, you’re in with a shot!

Your Don Draper character looks very classic on “Mad Men.” In what era would you personally like to live?

I like the present. I like fast airplanes, really safe cars and painless dentistry. Although the ’50s and ’60s were pretty good eras in this country, especially for a wealthy white male. But I prefer now. I love my iPhone.

You and Jennifer have been together for 15 years. Can you talk about how working together on a project like “Friends With Kids” may have tested your relationship?

We complement each other. After 15 years together, it’s a good place to be at. We make up for each other’s deficiencies very nicely. I overheard Jennifer saying that she’s very detail-oriented and hyper-aware of everything. I’m a little more laid-back and tend to be like, “Let’s relax.”

I think those traits can be amped up to a fault. I can be so laid-back that I tend to fall asleep. She can be so hypercritical that she can’t fall asleep. We balance each other out in that respect.  I think that is what has contributed to our longevity as a couple. We’re also very honest and upfront with each other. We don’t hide anything from each other.  If something bothers us, we air it, deal with it and move on. It’s a very adult way of dealing with problems.

Any reason why you didn’t play the lead in the film?

When you’re a couple in real life and you play a couple onscreen, it can be confusing for an audience. I think it’s a little voyeuristic and weird. It would be harder to supplant or sublimate our personalities for those of the characters’.  So we decided to remove that from the equation. I think it was probably a wise choice.

How did you and Jennifer meet?

We were both involved with other people when we met, so there was no immediate explosion. It was more of a slower get-to-know-each-other situation. About a year later, we started dating.

You had difficult challenges in your younger years, but you stayed on top of everything. What sustained you?

I had amazing teachers in my life who were very important to me. And I was not too young and stupid to think that I was smarter than them. I lost my parents when I was young. I had very good friends whose parents rallied round and very much helped to raise me in the whole sense of “It takes a village” kind of scenario.

My best friend’s parents became my de facto parents during those years, and I still look at them that way. I’m very close with the friends I grew up with and their families. I’m not going to say that I didn’t have my share of stumbles and poor decisions along the way. That’s part of growing up. You need to learn from those.

I decided at some point in my life that I was going to come to Los Angeles, try to be an actor and make money. Acting was the only thing I had any training in, so once I had enough money and a car that could go over 2,000 miles, I pointed it west and came out here.

I was determined at least to give it a shot. That was another thing that the teachers in my life instilled in me.  Just because you fail at something doesn’t mean it’s permanently over. Get back up, brush yourself off and move forward. That’s the one thing I tell kids who come out here, who want to pursue acting: “You’re going to hear NO a lot, so get used to it.” If I’m proof of anything, it’s that it takes just one yes.

Do you plan to direct eventually?

I did direct one episode of “Mad Men” this year. But directing feature-films is totally different from directing TV programs. Basically, directing on TV is making sure the train doesn’t run off the tracks, whereas directing films is constructing an entire train.  I have no desire to do that.