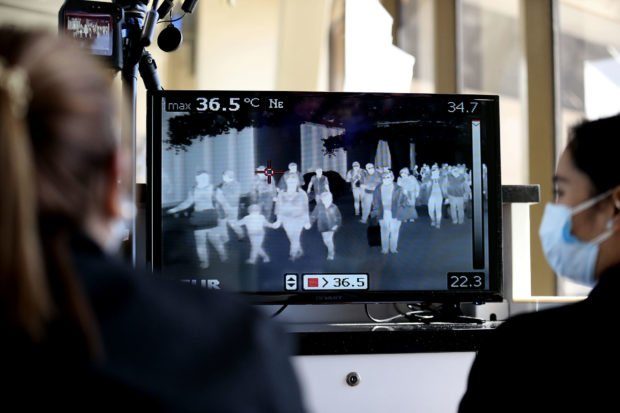 Following the outbreak of the new strain of coronavirus called the novel coronavirus or 2019-nCoV in China, local celebrities are expressing their concerns for the health security of the Philippines.

Musician Jim Paredes had some strong suggestions on preventing the outbreak from spreading to the country. “Let’s ban mainland Chinese from entering this country until this virus epidemic is contained,” he said on Twitter earlier today, Jan. 23.

“Not being racist,” he clarified. “Just taking caution during these very dangerous times. This is very serious.”

Let's ban mainland Chinese from entering this country until this virus epidemic is contained. Not being racist. Just taking caution during these very dangerous times. This is very serious.

As recent as yesterday, Jan. 22, no case of novel coronavirus has been recorded as legitimate in the country, according to the Department of Health.

A 5-year-old Chinese boy in Cebu was thought to have symptoms of the virus but his test results turned out to be negative, local officials said today.

The Filipina flight attendant who put herself in quarantine meanwhile is now recovering, but is still being monitored to check if she indeed has the said coronavirus. She recently came from Wuhan, China, ground zero of the novel coronavirus outbreak.

In another tweet, Paredes reiterated that people should be cautious of the virus, as any Chinese mainlander may have it.

“If we don’t watch out, this virus can be an epidemic,” he stressed. “Every other Wuhan De La Cruz may be a carrier.”

If we don't watch out, this virus can be an epidemic. Every other Wuhan De La Cruz may be a carrier.

Gretchen Ho meanwhile asked for everyone’s safety, noting that several disasters have already occurred even though the year has only just started.

“It’s just January & so much has happened to the world,” she emphasized on Twitter earlier today. “Now, it’s the #NovelCoronavirus. Stay safe everyone.”

It’s just January & so much has happened to the world 🤯 Now, it’s the #NovelCoronavirus. Stay safe everyone.

Actress Agot Isidro was alarmed after news broke that four Chinese citizens, relatives of the 39-year-old man in Hong Kong infected with the novel coronavirus, have recently arrived in the country.

“Uh-oh,” Isidro simply posted on Twitter earlier today, quoting a tweet from a journalist from Hong Kong reporting the news.

The four family members have passed the screening from Cebu Pacific, however, but are still being monitored by the Bureau of Immigration and may be put in quarantine, according to Justice Secretary Menardo Guevarra.

Television host Bianca Gonzalez meanwhile was aghast after seeing a report stating that Chinese researchers found out that the virus likely originated from bats.

“I also read about those videos going around of some people eating ‘bat soup’ in China,” she said on Twitter earlier today, quoting Bloomberg journalist David Ingles’ report of the news.

I also read about those videos going around of some people eating "bat soup" in China. 😩 https://t.co/wlQowk7G1l

Gonzalez is referring to the videos of Chinese citizens eating “bat soups,” which have been circulating online after the #coronacirus trended on Twitter following the outbreak.

The virus has reportedly killed at least 17 people and infected more than 500, as of writing. Other countries such as the United States, Thailand, Japan, South Korea and Taiwan have already reported cases as well. NVG