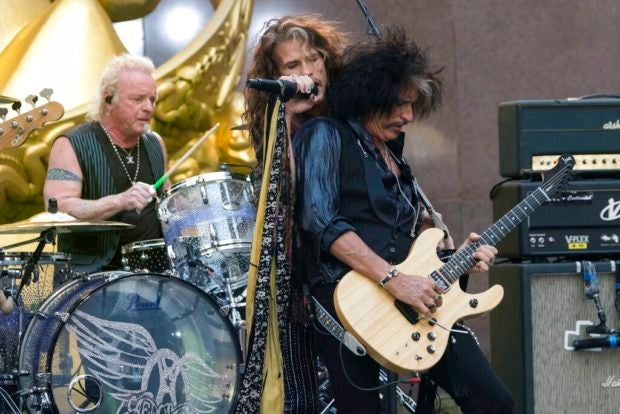 In this Aug. 15, 2018, file photo, Joey Kramer, from left, Steven Tyler and Joe Perry of Aerosmith perform on NBC’s “Today” show at Rockefeller Center in New York. Kramer, a founding member of the band, filed a lawsuit against his band mates in January 2020 in Massachusetts Superior Court in Boston, claiming he has been kept out of the band after he hurt his ankle in 2019 and missed some shows. The suit comes just as the band is set to perform and be honored at Grammy Awards events. AP

BOSTON — A judge has told Aerosmith’s drummer Joey Kramer to dream on if he hopes to rejoin the band as it set to perform and be honored at Grammy events this week.

Massachusetts Superior Court Judge Mark Gildea on Wednesday denied Kramer’s request to order the band, whose first hit single was 1973’s “Dream On,” to let him participate in an award celebration in Los Angeles on Friday as well as Sunday’s prime time Grammy Awards show.

“Given that Kramer has not played with the band in six months and the dearth of available rehearsal time before the upcoming performances, Kramer has not shown a realistic alternative course of action sufficient to protect the band’s business interests,” the judge’s decision reads in part.

Kramer said in a statement that he’s “extremely disappointed” but respects Gildea’s decision.

“I knew filing a lawsuit was a bit of an uphill battle,” he said. “I can hold my head high knowing that I did the right thing – to fight for my right to celebrate the band’s success that I have dedicated the better part of my life to helping build.”

The 69-year-old Magnolia, Texas, resident had argued the band, which he helped found in Boston 50 years ago, is in breach of contract because it required him to re-audition for his job after an ankle injury last year caused him to miss a chunk of the band’s residency at a Las Vegas casino.

Kramer said in his suit that the band required him to earn his job back by performing a series of solo rehearsals to prove he could play “at an appropriate level.”

He argued the “artificial, made-up and undefined” requirement was “insulting and upsetting” because that no other member of the band has been asked to do it before. Singer Steven Tyler, guitarists Joe Perry and Bradley Whitford, and bassist Tom Hamilton have all been recently sidelined with injuries and illnesses and weren’t asked to re-audition for their jobs, Kramer noted in his suit.

“This is not about money,” he said in a statement ahead of Wednesday’s hearing in Plymouth, Massachusetts. “I am being deprived of the opportunity to be recognized along with my peers, for our collective, lifetime contributions to the music industry.”

Representatives for Aerosmith didn’t comment on the judge’s decision.

The band has said previously it invited Kramer to join it for the Grammy events. There just wasn’t enough time to rehearse together for him to play on stage, the band maintained.

“Joey Kramer is our brother; his well-being is of paramount importance to us. However he has not been emotionally and physically able to perform with the band, by his own admission, for the last 6 months,” the statement reads.

“We have missed him and have encouraged him to rejoin us to play many times but apparently he has not felt ready to do so,” the statement continues. “Joey has now waited until the last moment to accept our invitation, when we unfortunately have no time for necessary rehearsals during Grammys week.”

Kramer said after Wednesday’s decision he appreciates the band’s offer, which he said amounts to “red carpet photo ops.” But he said it’s still “extremely hurtful” to know someone else will be playing in his place.

In his lawsuit, Kramer said his fellow band members deemed his “try out” wasn’t “technically correct” and lacked “energy,” an assessment he strongly disputed. He’s also said its “devastating” to miss out on being honored on the music industry’s biggest stage.

“The greatest magic and success of Aerosmith happens when all the band’s founding members are together in the house,” he said before Wednesday’s decision. “To be removed from my rightful place on stage to celebrate our success — a success that acknowledges my own life’s work, is just plain wrong.”

Aerosmith is slated to receive the 2020 MusiCares Person of the Year award on Friday at the Los Angeles Convention Center.

Alice Cooper, Foo Fighters, Jonas Brothers, John Legend and John Mayer are among the artists slated to perform as the band is recognized for its philanthropic work by the Recording Academy, which awards the Grammys.

Aerosmith is also set to perform a “career-spanning medley” at the Grammy Awards show Sunday night at the Staples Center where they’re expected to be joined on stage by hip hop’s Run-DMC.