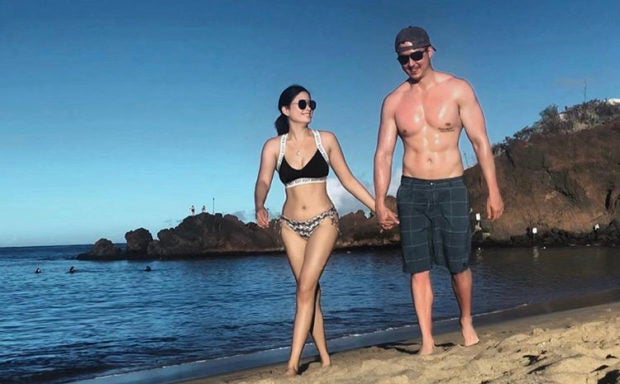 Being in a long-distance relationship isn’t easy, Yam Concepcion admitted.

But despite living thousands of miles apart, she and her New York-based boyfriend have managed to maintain theirs—something they owe to the strong foundation they have built as a couple.

“It comes down to age and maturity. He’s a secure person and is very supportive of me,” she said of her nonshow biz partner, Miguel Cu-Unjieng, whom she has been dating for five years now. “He doesn’t have any mean bone … I can’t think of any. He’s just really kind.”

While Miguel isn’t the jealous type, Yam does get a bit embarrassed when he chances upon some of the romantic scenes she does for television work.

“Nakakahiya, eh! He’s not a show biz person, so he doesn’t know how things work here. I’d be like, ‘Huwag mo nang panoorin! I get conscious about it,” she told reporters at a recent press conference for her upcoming horror film, “Night Shift,” which opens in cinemas on Jan. 22.

“Sometimes, he would see them (posts about my soap) on social media. And he would go, ‘What’s that? What’s happening?’” Yam—who was last seen in the ABS-CBN romantic drama, “Halik”—related, laughing. “But it’s nothing serious.”

Trust, the 31-year-old actress pointed out, is just as crucial in their setup.

“He has no reason to get mad or jealous because I’m loyal to him. He knows that what I do is just work,” she said, adding that despite his boyfriend’s good looks, he’s not a “chick boy,” as some people assume.

“That’s very far from how I know him. He has good values and you know he was raised right by his parents,” she said.

As for marriage, Yam jested that she doesn’t want “to jinx it.” She’s excited, however, about Miguel’s plans to relocate to Manila in mid-2020. “Things can still change, so I don’t want to look too far ahead,” she said.

Besides, Yam intends to sustain the career “momentum” she has been enjoying the past two years. After “Halik,” she starred in a digital series, titled “Uncoupling,” and is set to topbill the upcoming afternoon soap, “Love Thy Woman.”

“Night Shift,” which was directed by the actress’ namesake filmmaker, Yam Laranas, is a medical-horror movie set in a hospital morgue. The plot revolves around Jessie, a pathologist’s assistant who doesn’t believe in the afterlife. But she soon finds herself questioning her views when, one stormy night, the dead bodies start to give off hints that they’re coming back to life.

“No one really knows what happens after death. It’s said that a person will still have brain activity 10 minutes after death. So what happens during that window? The movie aims to delve into that, and I hope it sparks curiosity,” she said.

The subject resonated with her, she said, especially because her uncle passed away while she was doing the film.

“Fear of death is such a universal concept. I’m afraid of dying. However, my uncle’s passing made me realize that it wasn’t death itself I’m really afraid of, but the idea of not being able to communicate my love for the people I care about,” she said

What Yam likes most about the film is that it doesn’t resort to jump-scare gimmicks. “There’s eeriness in its calmness,” she said. INQ