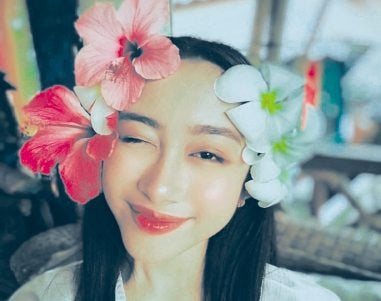 Shaniah Rollo has always loved singing, but the idea of doing it in front of other people used to terrify her. She was a shy kid—and still is. So, imagine her shock, she said, when she got home from school one day, and was greeted by her dad, saying that he had signed her up for the talent search, “Ireland’s Got Talent.”“Seeing me in a television competition was a dream of his. But I didn’t expect that we would actually do it. I panicked when he told me that he had entered me into the show,” she told the Inquirer in a recent interview.

“I have never competed in one before. I get really nervous. Back then, I would tug and hold on to my mother’s arms whenever I had to sing. I needed her by my side all the time,” related the 15-year-old singer, who was born and raised in Laguna province, before moving to Ireland in 2016.

But being part of the show’s debut season in 2018 proved to be a morale-boosting experience. Her mellifluous rendition of the Cyndi Lauper hit “True Colors” in the audition round brought all four judges—Denise Van Outen, Jason Byrne, Michelle Visage and Louis Walsh—to their feet.

“I’m not a belter. And I didn’t see myself as a good singer. My voice is calm. But somehow, I was able to meet the expectations of other people. It felt unbelievable,” she said.

While her journey ended in the semifinals, she went home feeling a lot better about herself as a performer. “It helped me build self-confidence. I met lots of people and gained courage not only to sing in front of a crowd, but also to communicate with other people,” said Shaniah, who later on joined the “Junior Eurovision Ireland,” where she was a finalist.

However, Shaniah remains most comfortable with a ukulele, singing original songs and covers for her YouTube channel. “I have been recording my performances since I was 11. I get happy when I read positive comments online,” she related.

Shaniah, whose father is a musician in Ireland, grew up surrounded with music. Sharon Cuneta was one of her early favorites. Today, she listens to a lot of Billie Eilish and Ariana Grande. But her singing style isn’t particularly patterned after those singers.

“I just sing in a way that comes naturally to me,” she said. Her new single, “Too Young,” is a danceable bop that tells of a protective mother who wouldn’t let her young daughter get into romantic relationships. “It’s something listeners my age would appreciate,” she said of her single, which is produced by RJA Productions. “It’s about enjoying our youth and being patient.”

Shaniah also writes her own songs and would love to have some of them released someday. Coming up with her own material is important, she pointed out, because that would allow her to sing about her own thoughts. “Instead of overthinking or stressing myself over something, I would rather write a song about it. I’m still very reserved, so I feel like I can express myself better through writing,” she related. “I think expressing your feelings or concerns is healthier than keeping it to yourself.”

Her ultimate goal is to become an international recording artist. Once she finishes school, she plans to pursue a career in music full-time, and shuttle between Ireland and the Philippines. “I can’t believe that I’m making progress. It feels like I had just woken up and all these things are happening. I still feel like a 12-year-old kid,” she said.