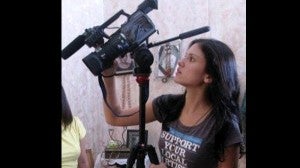 SHE HAS done some 10 short films in school and directed three music videos as a “professional.”

GMA 7 actress Bianca King recently had an interview with a top production house.
It was not for a film role or a modeling deal, but for an opportunity to direct commercials, said the actress, who is raring to work behind the camera.

Bianca recently graduated from the De La Salle-College of St. Benilde with a degree in digital filmmaking, and wants to direct TV commercials in the future.

“I know I’ll thrive in the fast-paced world of advertising,” she explained. “Production houses are always looking for young blood.”

Frencheska’s video was shot in Bianca’s townhouse and neighborhood.

Friends star in her films
Bianca convinced her celebrity-friends to guest in cameos in her directorial assignments: Heart Evangelista appeared in the Hale video and Richard Gutierrez portrayed the love interest in Frencheska’s video, which also featured other GMA 7 stars Gwen Zamora and Marvin Kiefer. 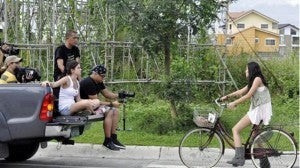 DIRECTOR at work: Bianca King (sitting on the van) believes she will thrive in the fast-paced advertising world.

She admitted that she turns to friends to cut down on costs: “Oftentimes, the budget is too small and I would rather spend it on food and equipment.”

For her short films, she also tapped pros as lead actors. In “Disorder,” she hired Joey Paras; in “Rebecca Red,” Paloma Esmeria; and in “In Memory Of,” Carla Humphries.

“Some of my short films are on YouTube,” she said.

A favorite short is “The Morning After,” starring Rhian. “But I can’t post it on YouTube because of its mature content. It’s surreal, suspenseful, and bloody,” said Bianca.

Dark territory
Bianca acknowledged that her short films venture into dark territory. “I’m drawn to stories about death and murder. If I ever direct a full feature film, it would have to be a psychological thriller.”

For her thesis however, she whipped up a romantic-comedy: “It’s my first time to do a love story so it’s very precious to me.” Bianca worked as director and leading lady opposite Aljur Abrenica. “It was weird calling out action and then acting with Aljur after,” she recounted.

For a film appreciation class, she did a paper on cinematographer-director Mike de Leon. She watched all his films and loved all of them—especially “Bayaning Third World” and “Kisapmata.”

Binaca also saw Lino Brocka’s ‘Maynila sa mga Kuko ng Liwanag’ where Mike was the cinematographer: “He was influenced by German expressionism in his visuals. A lot of skewed lines and sharp angles.”

Trillanes to opposition: Don’t sacrifice principles at ‘altar of winnability’