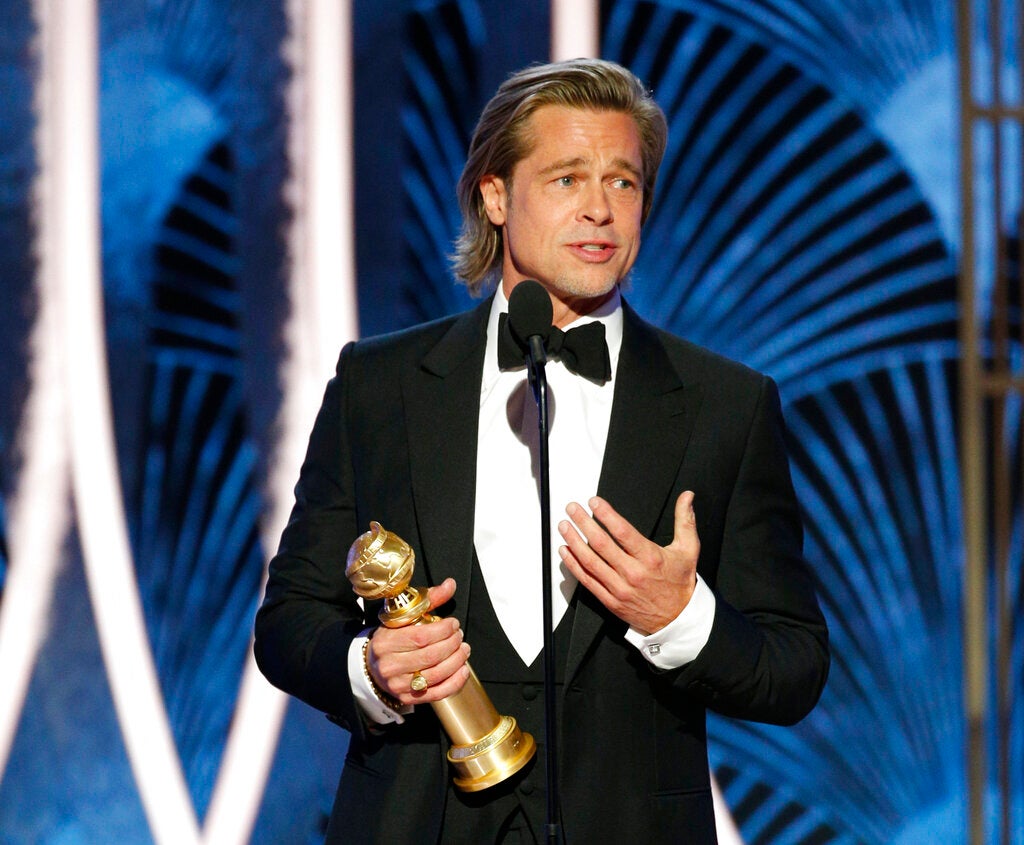 This image released by NBC shows Brad Pitt accepting the award for best supporting actor in a film for his role in “Once Upon A Time…In Hollywood” at the 77th Annual Golden Globe Awards at the Beverly Hilton Hotel in Beverly Hills, Calif., on Sunday, Jan. 5, 2020. Paul Drinkwater/NBC via AP

Brad Pitt’s hunt for his first acting Academy Award is looking more like a sure thing all the time. Pitt won best supporting actor Sunday at the Golden Globes for his performance in Quentin Tarantino’s “Once Upon a Time… in Hollywood.”

Phoebe Waller-Bridge and Sam Mendes also won awards at Sunday’s ceremony, but they were all upstaged by the ceremony’s scorched-earth opening by returning host Ricky Gervais.

Gervais, who has a series on Netflix, said he could summarize the three-hour award show with a simple phrase: “Well done, Netflix. You win.” The streaming giant came into the Globes with a commanding 34 nods: 17 in film categories and 17 in television categories.

Hosting the Globes for the fifth, and according to him last time, Gervais was perhaps even more cutting than before.

He told executives in the room that journalist Ronan Farrow, who has exposed cases of sexual misconduct, was coming for them. He said something vulgar that got bleeped about Judi Dench’s part in “Cats.” And most of all, he mocked Hollywood hypocrisy, skewering stars for working for companies like Apple, Amazon and the Walt Disney Co. while giving speeches urging social change.

“You’re in no position to lecture the public about anything,” he added. “You know nothing about the real world. Most of you spent less time in school than Greta Thunberg, so if you win, come up, accept your award, thank your agent and your god and (expletive) off.”

“Once Upon a Time … in Hollywood” began what was expected to be a good night for Tarantino’s Los Angeles fable with a win for best screenplay.

One of the night’s biggest surprises came in the best directing category. Sam Mendes won for his war film “1917,” a WWI tale made to appear it was made in one long shot, besting Martin Scorsese (“The Irishman”) and Tarantino.

There is not one director in the world that is not in the shadow of Martin Scorsese,” Mendes said.

The first award of the night went, fittingly, to a streaming service series. Ramy Youssef won best actor in a TV series comedy or musical for his Hulu show “Ramy.” Best actor in a limited series went to Russell Crowe for the Showtime series “The Loudest Voice.” He wasn’t in attendance because of raging wildfires in his native Australia.

“Make no mistake, the tragedy unfolding in Australia is climate-change based,” Crowe said in a statement read by presenters Jennifer Aniston and Reese Witherspoon.

Ahead of Sunday’s show, some wondered how much the rising tensions with Iran would be talked about following the U.S. targeted killing on Friday of Iranian Gen. Qassem Soleimani. That went unmentioned until more than halfway through when Patricia Arquette, a winner for her performance in Hulu’s “The Act,” said history wouldn’t remember the day for the Globes but will see “a country on the brink of war.” She urged all to vote in November’s presidential election.

Waller-Bridge followed up her Emmy haul by winning best comedy series and best actress in a comedy series. She thanked former President Barack Obama for putting “Fleabag” on his best-of-2019 list. With a grin, she added: “As some of you may know, he’s always been on mine.”

HBO was also triumphant in best TV drama, where the second season of “Succession” bested Netflix’s “The Crown” and Apple TV Plus’ first Globe nominee, “The Morning Show.” Brian Cox, the Rupert Murdoch-like patriarch of “Succession,” also won best actor in a drama series. “The Crown” took some hardware home, too, with Olivia Colman winning best actress in a drama series, a year after winning for her performance in “The Favourite.”

Best foreign language film went to Bong Joon Ho’s “Parasite,” the Cannes Palme d’Or winning sensation from South Korea. Despite being an organization of foreign journalists, the HFPA doesn’t include foreign films in its top categories, thus ruling out “Parasite,” a likely best picture nominee at next month’s Oscars.

“Once you overcome the inch-tall-barrier of subtitles, you will be introduced to so many more amazing films,” said Bong through a translator.

Tom Hanks, also a nominee for his supporting turn as Fred Rogers in “A Beautiful Day in the Neighborhood,” received the Cecil B. DeMille lifetime achievement award. The Carol Burnett Award, a similar honorary award given for television accomplishment, was given to Ellen DeGeneres. She was movingly introduced by Kate McKinnon who said DeGeneres’ example guided her in her own coming out.

“The only thing that made it less scary was seeing Ellen on TV,” said McKinnon.

Hanks’ speech had its own emotional moment. Just as he was beginning comments that would touch on the importance of actors being on time, Hanks caught sight of his wife and four children at a table near the stage and choked up.

“A man is blessed with the family’s sitting down front like that,” said Hanks.

Elton John and Bernie Taupin won the evening’s most heavyweight battle, besting Beyonce and Taylor Swift. Their “I’m Gonna Love Me Again” won best song. “It’s the first time I’ve ever won an award with him,” said Elton of his song-writing partner. “Ever.”

The Golden Globes, Hollywood’s most freewheeling televised award show, could be unusually influential this year.

The roughly 90 voting members of the Hollywood Foreign Press Association have traditionally had little in common with the nearly 9,000 industry professionals that make up the Academy of Motion Picture Arts and Sciences. The HFPA is known for calculatingly packing its show with as much star power as possible, occasionally rewarding even the likes of “The Tourist” and “Burlesque.”

Sunday’s show may have added to that history with an unexpected award for “Missing Link” for best animated feature film over films like “Toy Story 4” and “Lion King.” No one was more surprised than its director, Chris Butler.

But the condensed time frame of this year’s award season (the Oscars are Feb. 9) brings the Globes and the Academy Awards closer. Balloting for Oscar nominations began Thursday. Voters were sure to be watching.

The dearth of nominations for female filmmakers stoked more backlash than anything else at this year’s Globes. Only men were nominated for best director (just five women have ever been nominated in the category), and none of the 10 films up for best picture was directed by a woman, either. Time’s Up, the activist group that debuted at the black-clad 2018 Globes, was highly critical of the HFPA for the omission, calling it “unacceptable.”