In the media, at least, the Titanic proves unsinkable

LONDON – It was dubbed the unsinkable ship, but 100 years after it disappeared beneath the icy waters of the North Atlantic, the Titanic has resurfaced again in cinemas, bookshops and on television screens. 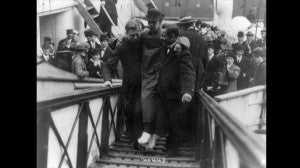 In this 1912 photo made available by the Library of Congress, Harold Bride – surviving wireless operator of the Titanic – with feet bandaged, is carried up the ramp of a ship. April 15, 2012 is the 100th anniversary of the sinking of the Titanic, just five days after it left Southampton on its maiden voyage to New York. AP Photo/Library of Congress

The centenary of the disaster on April 15 will be marked around the world by the release of a new 3D version of James Cameron’s epic 1997 film, “Titanic”, as well as a TV drama sold to 86 countries and a flurry of books.

“There’s something about disasters that happen to ordinary people who have done nothing to deserve it,” said Julian Fellowes, the Oscar-winning writer behind a new British TV drama set on the sinking ship.

Explaining the enduring appeal of the story last month at the series’ launch, he added: “There was a strange promise in Titanic, this very arrogant world of the British empire before the First (World) War, with the bristling moustaches and the women in their diamonds.”

“Everything looking so impregnable– when, of course, it wasn’t.”

Fellowes said he has always been drawn to the story of the Titanic, and if the mass of publications released in Britain for the 100th anniversary of the disaster is anything to go by, he is not alone.

“There’s a constant fascination,” said a sales assistant at Hatchard’s bookshop in London, surveying some of the new tomes dedicated to the story.

For those who want to imagine being on board the luxury liner, there is John Blake’s “Titanic: A Passenger’s Guide”.

It guides readers through the ship, from its unique covered promenade area to the Turkish baths, squash court and an exercise room complete with electric horse and electric camel.

The designers thought of everything to keep their passengers happy on the journey — except the one key thing that would prove absolutely vital.

White Star Line, which built the ship, originally envisaged 64 lifeboats for the 2,200 passengers onboard, but company chairman Bruce Ismay reduced this to 16 plus four inflatables, to leave more space for leisure areas.

Frances Wilson notes in her book, “How to Survive The Titanic, or The Sinking of J. Bruce Ismay”, that 16 lifeboats was more than required by law.

But Ismay, who managed to find himself a seat on boat 14 and was rowed to safety, went down in history as the man responsible for the disaster.

The Frankfurter Zeitung newspaper summed up the public mood with its declaration at the time that as long as Ismay lived, “he will bear on his forehead the mark of Cain, the mark of the contempt of all men of honor”.

When the Titanic sank, the 20 lifeboats could have transported 1,100 passengers to safety. But they were not filled for fear that they may overturn, and in the end they saved just 705 lives.

The human stories of the Titanic were movingly imagined in James Cameron’s film starring Leonardo DiCaprio and Kate Winslet, which won 11 Oscars when it was released 15 years ago but is now reaching a new generation of audiences, this time in 3D.

But in his recent book, historian Richard Davenport-Hines paints a more nuanced picture than the class struggles shown in the film, where working-class passengers were sacrificed for their rich shipmates.

Among the stories recounted in “Titanic Lives” is that of billionaire Benjamin Guggenheim, who gave up his place on a lifeboat to a female passenger and who went to his death in his evening dress, a gentleman to the end.

Photographs are also key to understanding life on board, particularly those taken by a young candidate for the Jesuit priesthood, Frank Browne, which are recorded in the glossy “Titanic in Photographs”.

An amateur snapper, Browne took shots of the boat and its passengers before having the good fortune – or good sense – to disembark with his negatives in Ireland, just days before the Titanic sank to a watery grave.