LONDON – A century since the grandest liner ever built sank on its maiden voyage with the loss of more than 1,500 lives, the legend of the Titanic still captivates the imagination the world over. 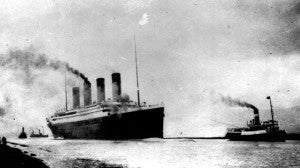 In this April 10, 1912 file photo, the luxury liner Titanic departs Southampton, England prior to her maiden Atlantic voyage en route to New York City. As the Titanic was sinking in the North Atlantic on the night of April 14-15, 1912, its more than 2,000 passengers and crew scrambled in the dark for lifeboats. AP FILE PHOTO

The story of the so-called unsinkable ship, which went down on April 15, 1912 after hitting an iceberg, remains a fascinating tale, laced with luxury, industrial achievement, disaster, heroism, bravery and unspeakable horror.

The White Star Line ship was on her first crossing of the Atlantic from Southampton to New York when disaster struck.

As the icy water gradually flooded the ship over two hours and 40 minutes, the fate of those on board was decided: while 710 were saved in the lifeboats, 1,514 perished.

But when Titanic vanished below the waves it was not the end of the story but the beginning of a century of fascination at such an unimaginable tale.

“The sinking of Titanic probably had the same effect in 1912 as 9/11 did in our time,” said Philip Littlejohn, whose grandfather Alexander Littlejohn was a first-class steward on the ship and survived.

“There have been other ships which have sunk with far greater loss of life, but people are still fascinated by Titanic because it was a microcosm of society at that time,” he told AFP.

“The rich and famous would never come into contact with a steerage passenger – the Titanic disaster was the end of that era. Two years later the whole world changed with the outbreak of World War I.”

The centenary is being marked by the release of a new 3D version of James Cameron’s epic 1997 film, “Titanic”, as well as a British television drama sold to 86 countries and a flurry of new books and music.

Julian Fellowes, who wrote the four-part “Titanic” series being shown on Britain’s ITV, said the innocence of the victims was the essence of any spellbinding disaster tale.

“This happened. This was real. There really were men and women running around the decks, as our extras are, and a hell of a lot of them are going to die. That just can’t fail to move you,” he said.

“Titanic is a true disaster movie because it involves all sorts of people, all kinds, all ages, and they had done nothing to deserve it.

“The fact that it was a trailer for World War I obviously adds to its resonance.”

Four composers have been moved to write music to mark the centenary.

Robin Gibb of the Bee Gees has composed “The Titanic Requiem”, which has its premiere performance by the Royal Philharmonic Orchestra in London on April 10.

“The ship was built in an age when everyone was fully confident they’d conquered the elements… but everybody knows how the story ends,” Gibb told The Times newspaper.

Cities across Britain have been making the most of their Titanic heritage.

In Belfast, where the ship was built, the world’s biggest Titanic visitor attraction has been built in the derelict Harland and Wolff shipyards.

The shimmering building, shaped like four Titanic-sized prows, tells the story of the liner from its inception in Belfast’s industrial boom years through to its launch, its sinking and the aftermath.

Meanwhile Southampton on the southern English coast wants to tell the largely forgotten story of the crew, three-quarters of whom came from the port. Some 549 Southampton residents died in the disaster and the city’s new SeaCity museum focuses on the stokers and stewards that worked on the ship.

The Canadian port of Halifax, where 150 victims were buried after they were picked up by rescue ships, will commemorate the anniversary with a sombre candlelight vigil.

Stephen Cameron, co-founder of the Belfast Titanic Society, said the resurgence in interest was striking.

“There was very little interest in it worldwide before the wreck was discovered in 1985,” the author of “Titanic: Belfast’s Own” told AFP.

“On our very first tours, I can remember going on a bus, for free, with two people on board. Last year, we had 1,200 people in two weeks.

“It amazes me how it still captivates people after all these years.”