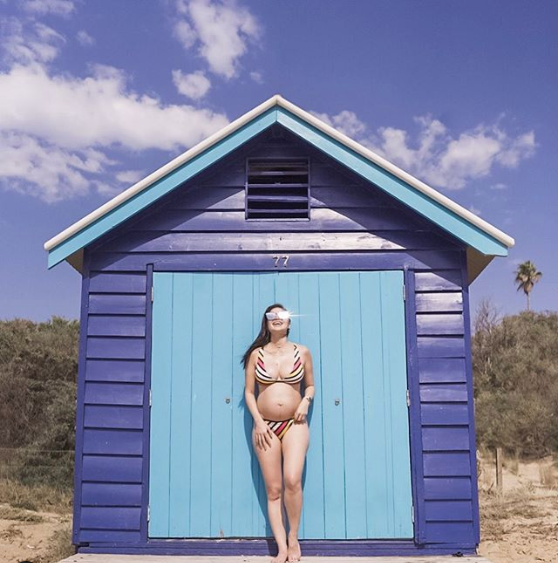 Actress and soon-to-be mother Anne Curtis appears to be making the best out of her Christmas holiday and the last few weeks her of pregnancy by visiting the beach. Curtis flaunted her curves and baby bump while sporting a striped two-piece bikini.

The Filipino-Australian actress also announced that she just reached the 30th week of her pregnancy, via her Instagram account yesterday, Dec. 29.

“Sun’s out bellybutton is out,” Curtis said. “Just 10 more weeks or so till we get to meet our little bub.”

The actress had a picnic by the beach with her husband, chef and vlogger, Erwan Heussaff. Heussaff prepared some healthy snacks for him and his wife, as seen on his post today, Dec. 30.

Curtis announced last week that she will be away from her noontime TV show “It’s Showtime” for her maternity break. The actress is also promoting her movie with Vice Ganda, included in the Metro Manila Film Festival this year, entitled “The Mall, The Merrier”.

Other celebrity moms are also flaunting their beach bodies this holiday season. Beauty Gonzalez, one of the stars of the TV drama series “Kadenang Ginto”, also showed off her curves in a bright red swimsuit today.

Meanwhile, actress and mother-of-two, Marian Rivera gleamed in the ocean while rocking a yellow one-piece swimsuit, as seen on her post yesterday.

Rivera said, “Getting my dose of vitamin sun before the year ends.” JB

Anne Curtis to take a break from ‘It’s Showtime’