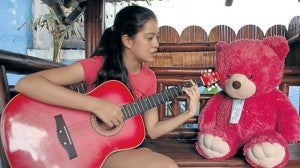 SHE PREFERS most things in pink, like her guitar and teddy bear toy.

“Luna and I are different in many ways. She’s quiet while I’m gregarious. She’s very refined while I enjoy playing it rough with friends. I sometimes feel that being Luna restrains me,” Sue Anna tells Living Stars during a visit to her home in Parañaque City.

Luna is a clairvoyant in the Saturday afternoon series codirected by Ato Bautista, Theodore Boborol and Neal Felix del Rosario. Haunted by her ability of foresight, Luna strives to accept and hone her talent while struggling to belong in the community. Costarring with Sue Anna are Paul Salas, Makisig Morales, Jane Oinez and Joshua Colet.

Sue Anna says she and Luna are also poles apart in terms of fashion. “She’s into long skirts in neutral colors such as black, brown and dark blue. And she doesn’t wear accessories,” the 15-year-old adds.

But Sue Anna says she can well relate to her character, Rona, in the drama series “Angelito: Batang Ama.” It’s about a young father struggling to raise his child and is top-billed by JM de Guzman.

“Rona is what I call babaeng bakla,” Sue Anna explains. “She’s very fashionable. She’s into shorts, miniskirts, tank tops, and high heels. She also likes putting on makeup and accessorizing. Rona and I have similar personalities. I guess the only difference is that she likes boys; I do, too, but I’m also one of them!”

“This was the first item I bought from Forever 21,” she points out. “I wore this dress during the farewell party of ‘Mula sa Puso.’ I like it because it’s colorful. It complements my skin, makes me look even fairer.”

Her favorite T-shirt has the statement, ‘This isn’t how I pictured it.’” “It’s from Artworx,” she says. “My older brother used to own it.”

Sue Anna says she’s still waiting for the perfect occasion to wear her cream-colored lacy dress. “It’s really pretty. I bought it at a bargain shop in Divisoria. I’m not much into pricey outfits. With the right accessories, I can turn a cheap item into something funky!”

“I bought this because I found it really cute,” she says, showing us a pair of black-beige high heels with lace. “I plan to match it with my new cream-colored dress. I like my dress shoes to be really high. I’m used to wearing them. I remember practicing on my mom’s high heels when I was younger.”

“Neon green is my favorite color. This was why I bought a pair of flats with the same hue. I haven’t worn them yet; I just like looking at them. It’s always on display on my bedroom dresser. I think I’d look like an airport reflector if I wore it,” she says, laughing. 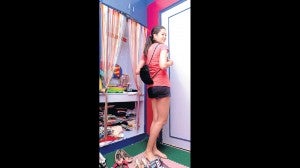 THE EMBROIDERED-BEADED backpack is a present from an aunt in the US.

“When hanging out with friends, I prefer wearing my Converse Chuck Taylors, although I had to buy a couple of Skechers Dunks for work. I wore them in some of my appearances on  ‘ASAP,’” Ramirez says.

“This shoulder bag with a Superman logo is special to me,” she reminisces.  “I got it from a friend as a gift last Christmas. I use it whenever I have the chance. I bought this pink-green leather bag during a trip to Tiendesitas. I find it really cute. It’s inspired by the bag I once saw (‘Oka2kat’ costar) Eliza Pineda use during taping.”

Sue Anna’s US-based aunt sent her a  black beaded backpack along with some other stuff in a balikbayan box. “It’s unique,” she says. “I’ve not seen anything like it in the local boutiques I’ve been to. My tip to readers is that if you plan to purchase a bag with your hard-earned money, better buy something that’s made from good and sturdy material because it lasts longer.”

“I prefer silver necklaces to beaded ones,”  she says, sifting through her accessories. “I also like those with interesting pendants, like this one with a pink heart that my best friend gave me, or the one with a man’s mustache. This necklace with a teddy bear pendant was a gift from (comedienne) Rubi Rubi two Christmases ago.”

It’s better to “buy items that are versatile, or those that you can match with a lot of outfits,” she advises. “Chunky pendants are good with plain shirts. I also own a few chandelier earrings, but they’re mostly for work. When I’m with friends, I prefer to wear simple-looking studs.”

“I like Pink With a Splash from Victoria’s Secret because of its powdery scent. I got my first bottle from my aunt in the States,” Sue Anna says, showing us the bottle. “Since then, she always sends me the same scent. My other favorite from Victoria’s Secret is Vanilla Lace. It’s sweet and not too strong, just right for my age.”

“This Patrick Star stuffed toy (a character from the Nickelodeon animated series ‘SpongeBob SquarePants’) is the most memorable,” she says, smiling. “It’s a gift from (TV host) Robi Domingo. The oldest toy that I own is the dog that I got from mom and dad as a gift for my 6th birthday. The newest is this teddy bear, a replica of Rowan Atkinson’s favorite toy in ‘Mr. Bean.’ I got it in Divisoria for a really cheap price.”

“The Canon Powershot A4-70 digital camera was my mom’s gift two Christmases ago. It was on my Christmas wish list that year. I cried when I opened my present,” she says, remembering the occasion. 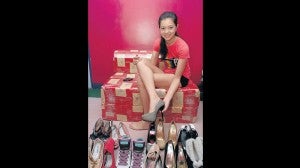 SHE REGRETS not having the chance to use her collection of shoes in her portrayal of the ultra-conservative Luna, her character in “Oka2kat.”

“I have two BlackBerry mobile phones, one is a Curve and the other a Curve 9360. The latter was my mom’s, but she found it too difficult to use and just gave it to me,” she says.

“My iPad is another gift from mom. I only use it for games. Jane, Makisig, and I like playing with it during  ‘Oka2kat’ taping breaks. My newest purchase is this GE A1255 digicam. My elder sister’s boyfriend sold it to me at a really cheap price,” she enthuses.

“I got the cardboard trumpet during the 2010 New Year’s celebration. It was from my super crush, (actor) Enchong Dee! It’s among the items on display on my dresser. I don’t allow anyone to touch it,” she giggles.

She says she has been decorating her photo wall for as long as she can remember. “I like posting pictures with friends and family on it. I enjoy making collages. It’s better than putting up photo frames, which are space-consuming.”

A brother who lives in the States  gave her a Justin Bieber DVD (“Never Say Never”) as pasalubong when he came to visit last year. “I’m a big Bieber fan and so are my friends. We watch this again and again when hanging out in my bedroom,” she says.

Read Next
Olivia Newton-John rocks at 63
EDITORS' PICK
EuroMillions Superdraw: A lottery draw unlike any other is coming to the Philippines
Smart releases Hyun Bin’s second TVC
Water remains our saving grace right now
‘Justice will be done,’ Duterte assures as he vowed probe on Jolo incident to bare ‘truth’
DOLE: Return of OFWs’ remains from Saudi to be ‘delayed,’ deadline moved to ‘early next week’
Current dominant strain of COVID-19 more infectious than original—study
MOST READ
BREAKING: Duterte signs anti-terror bill into law
Locsin warns of ‘severest response’ if China’s army drills in SCS ‘spill over’ to PH domain
Duterte tells military: No other president looked at you the way I did
‘Very timely, historic’: Senators laud passage of anti-terror bill despite ‘pressures’
Don't miss out on the latest news and information.