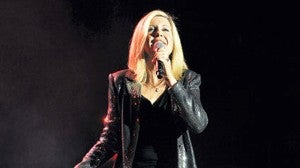 OLIVIA Newton-John at the Big Dome was the opposite of boring.

Some friends engaged in a good-natured debate on whether Olivia Newton-John was worth the journey to Smart Araneta Coliseum on traffic-jammed Edsa.

The fear was that the oh-so-mellow music she was known for would bore everyone to death!

“She’s a country artist. That can be boring,” commented a lady in her 30s.

“Hoy, not all her songs are country. Have you heard ‘Have You Never Been Mellow?’ That’s a good one!” countered another lady in her 40s.

Stifled laughter all ’round as the song was about feeling mellow.  The question over whether 63-year-old Newton-John would be in shape to sing “Physical” was posed.  The comment that it might be baduy drew a howl of protest from a third lady.

The males in the bunch shook their heads and downed their beers before heading to the Big Dome.

Accompanied by a full band and backup singers, Olivia looked fit and young and exuded confidence. Her opening number, “Pears on a Chain,” was a ballad with unfamiliar but interesting lyrics: “And if you look in my eyes/
You will see we are souls alike.”

The pace picked up with the mid-tempo country hit, “Have You Never Been Mellow,” which stirred the group’s memories in grade school!

“A Little More Love” had an engaging rock edge. Her back to the audience, Olivia swayed her hips and turned on the audience!

Her voice was a bit hoarse but it smoothened out when she started singing.

The hits came in quick succession: “Sam,” “Xanadu,” “Magic,” and “Suddenly”—the last one with backup singer Steve Real Vasquez taking the place of Cliff Richard in the original studio version. Olivia’s rendition of these tunes evoked nostalgia; the spontaneity in her phrasing wiped away thoughts of her being corny.

She was labeled a country singer early in her solo career Olivia admitted, and she sounded convincing in a medley that included Bob Dylan’s “If Not For You” and John Denver’s “Country Roads.” A Brit-Aussie girl singing “Banks of the Ohio” proved that music indeed knows no boundaries.

An acoustic take on “Physical” followed and sounded very promising, but Olivia cut it short and asked the crowd if they’d rather hear the original version.

Many in the audience assented. Olivia pulled it off, although her dancing was tempered and she caught her breath at the end of the song.

Her rendition of “Send in the Clowns” turned sadness into a pleasant feeling, and by the time she introduced the “Grease” medley, everyone was ready to party!

Her trim figure made it pleasurable to see Olivia trading old-school rock vocals with Vasquez on “You’re the One That I Want,” “Summer Nights,” and “We Go Together” and dancing away on her killer heels!

In “Hopelessly Devoted to You,” Olivia was consistent in her effort to sound as fresh as possible.

The beauty of “I Honestly Love You” was rediscovered in a song about being in the right place at the wrong time, which Olivia sang as if everything had happened just last night.