Overnight sensation, 30 years in the making 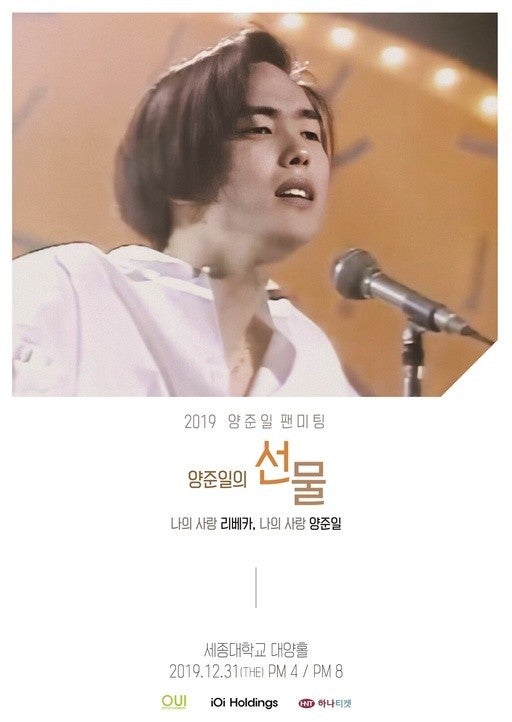 SEOUL — Of all the retro K-pop stars of the 1990s reemerging in recent years, Yang Joon-il is perhaps the least expected. For one thing, not many people liked him even back then.

But the 50-year-old Korean-American returned to the country Friday after a decades-long hiatus, set to hold his first fan meeting event over 30 years after debuting in 1991. The event “A gift by Yang Joon-il” will be held on Dec. 31 at Sejong University in Seoul.

“After a flurry of requests by the fans for Yang’s return, we’ve requested the event,” said local talent agency OUI Entertainment who is organizing the event for the singer who is currently retired.

The tale behind Yang’s belated return to stardom is as unusual as it was sudden. It all started with a recent trend of Korean YouTubers uploading retro TV shows — music, games, and variety shows — mostly from the 1990s.

Amid a sea of familiar faces, Yang’s stood out with his fashion, dance moves and vocals that were years ahead of his time.

In 1991, 22-year-old Yang debuted with a dance number “Rebecca,” which adopted what the music pundits are now defining as new jack swing music that was popular in America from the mid-1980s to early 1990s. His fashion and bling, dance movements also reflected the popular styles in the US then, along with gestures onstage.

The problem was that the Korean music scene at the time were unfamiliar with the relatively new style, with the inflow of music being relatively limited compared to today. English lyrics, his direct style of communication, inability to speak Korean fluently, even his looks that were deemed “feminine” made people uncomfortable.

Many men in the 1990s took the word “pretty” as insulting. In a music show in the early 1990s, Yang and singer Lee Hyun-woo were among those selected as prettiest singers, to which Lee reacted with a cold sneer and said, “I don’t know. I’ve never been called pretty in my life. Something must be wrong.”

Yang was a guy who said with an innocent smile, “I’ve been called pretty several times before,” a man who was not scared to put on exotic clothing when wearing even hip-hop style baggy clothes were considered a challenge.

“Such unfamiliarity prompted resistance (from the public). Before his music and style were contemplated, he was ostracized by the entertainment and culture circles alike. The basis for contempt was the fact that he did not speak Korean fluently, and the reason for discrimination was that he expressed himself in the most progressive manner,” culture critic Kim Seong-soo wrote in his article. “In an era where democracy was slowly changing the society, but when each distinct characteristics of a person and diversity were not yet welcome, Yang was torn away from the public before his ingenious talents had the chance to flourish.”

His songs hovered around No. 30-40 in the weekly rankings in music shows. After Yang’s unsuccessful solo run, he returned in 2001 as a member of project team V2, but failed to make much of a mark. After series of dispute with his agency, he faded away into obscurity before his current comeback.

“Most of us had never heard of Yang back then. I was in the relative minority because I was a fan of (singer) Byun Jin-sub, but nobody knew who Yang was,” said 42-year-old Oh Eun-yeong, who became a Yang fan nearly three decades after his debut. “Then people saw his video recently, and he was trendy that he could’ve been popular today, which is why everyone calls him ‘time-traveler’ now.”

Taking notice of the popularity, the producers of JTBC show “2You Project – SugarMan3” invited Yang to appear on their show, which introduces bygone celebrities that the public remembers but were not really popular. Yang’s personality won over the panel and the public alike, and his music received a unanimous vote from the teenage members of the audience on “would be popular today.”

The tickets for the upcoming fan meeting was sold 30 minutes after opening online Friday, with over 40,000 people joining Yang’s unofficial fan club, all while not releasing a single new song.

The singer has yet to release plans for his musical career — or even say whether he intends to resume it — but unlike in the early 1990s, the public is eyeing his next move closely.