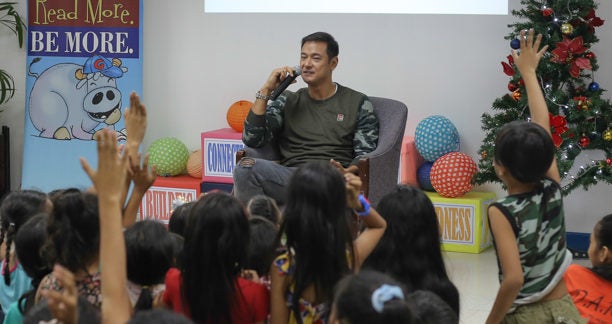 For award-winning actor Allen Dizon, the hardest part about making Brillante Ma Mendoza’s drama “Mindanao” was joining the production team 10 days after it has began shooting.

“I didn’t know which scenes were already shot. My first scene was meeting my wife and daughter after spending weeks in battle. I had to feel war-weary even though I haven’t shot any battle scenes yet. I also had to show some longing for my family, even though I only got to spend time with Judy Ann on the set on that very same day,” Allen told Inquirer Entertainment during a recent visit at the Philippine Daily Inquirer office in Makati City.

In “Mindanao,” Allen plays Malang Datupalo, a combat medic who was part of an offensive operation in Maguindanao. He returns home to be with his wife Saima (Judy Ann Santos) and their daughter Aisa, who is afflicted with cancer.“Mindanao” is Allen’s third project with the Cannes-winning director. Their first was the action series “Amo” for Netflix, then the critically acclaimed film “Alpha: The Right to Kill.”

“It’s always difficult during the first few days of a shoot, especially because Direk Dante (Mendoza’s nickname) doesn’t have a detailed script. Eventually, after several shooting days, we get more comfortable and are able to have a firm grasp of who our characters really are,” Allen said.

As for Judy Ann, who bagged a best actress award from the 2019 Cairo International Film Festival in Egypt for her performance in “Mindanao,” Allen said she needed very little direction from Brillante.

But this doesn’t mean it had been smooth sailing for Judy Ann from the start. Allen said she also had to control her emotions because she was used to acting for television, which required bigger movements.

“You go all out when you act for TV, even your tears have to drop and roll on your cheeks. I guess that was already easy for Judy Ann to do, but for the movie, Direk had to remind her to remove all those nuances and control her emotions,” Allen observed.

He is optimistic that Judy Ann’s best actress victory at the Cairo fest would help boost the film’s chances at the box-office race of the 2019 Metro Manila Film Festival.

“People will get curious. They’d want to find out what the international jury in Cairo saw in Judy Ann’s performance that was worth the recognition,” he explained.

Incidentally, Allen volunteered to be the celebrity storyteller of this month’s Inquirer Read-Along session. He read “Bertday ni Dyisus Bukas,” written by Alberta Angeles and illustrated by Jeric Sadullo. Allen also brought “Mindanao” coloring books and crayons and handed them to our little guests.

According to Allen, telling stories is one of Malang and Saima’s bonding moments with Aisa, who has already gotten too weak to play. In fact, interspersed between actual footage in the film are animated scenes of the folklore of Rajah Indara Patra and Rajah Sulayman, and their struggles to stop a dragon from devastating their homeland.

“Starting today, I will make reading to children my advocacy. I will start with a small group in Pampanga, where I live. I also hope to educate parents on the importance of making kids read books, instead of making them use gadgets all the time.” INQ