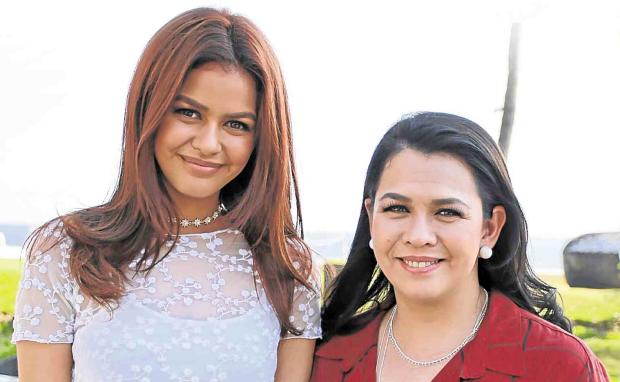 MANILA, Philippines — Veteran actress Lotlot de Leon supported her daughter Janine Gutierrez, saying that it is “kind of unfair” for artists to be judged for expressing an opinion.

De Leon made the remark following Gutierrez’s “Oh God” comment to a Twitter post about the return of Sen.  Ramon “Bong” Revilla Jr. to the small screen.

The veteran actress recalled the time when her daughter expressed her intention to enter the world of show business.

“I asked her, ‘Are you sure?’ I asked her that question not because wala akong bilib sa kanya o sa kakayahan niya [not because I don’t have trust with her or her capabilities], but because I was afraid that this industry that I have grown up into can be very harsh sometimes,” De Leon said in an Instagram post.

[There’s a time when you speak, regardless of whether your intention is good, it is still wrong for others. When you are in the industry, you should be ready for all the criticisms and a lot of opinion. When you’re in this industry, you can easily be judged without being asked why you said or did something.]

De Leon continued: “Everyone else can give their opinions and share how they feel pero dahil artista ka may hangganan ang pagbibigay mo nun [but since you are an artist, there is a limitation when giving your opinion]. Medyo unfair [it’s kind of unfair].”

It is because of this, De Leon said, that half of her did not want to allow Gutierrez to get into show biz.

“On the other hand I can’t stop her from what she wants for herself, for living her dreams, for proving herself and giving her a chance to go after that,” De Leon said.

“What I saw in Janine’s eyes and felt when we had that conversation that day is that she was willing to learn and ‘accept everything’ that comes with being an artist and be the best version she can be in this profession that she has chosen. That’s why I said yes,” she added.

De Leon said she was proud of having raised a daughter who was “respectful, level-headed, smart, humble, and willing to take risks when needed.”

“In the many years that I have also been in this industry at sa lahat ng nakita at napagdaanan ko, I have also learned to choose my battles, hindi lahat pinapatulan, sinasagot at pinapalaki,” De Leon said.

“At the same time I have also learned that it’s okay to say what you feel, to give your opinion and to be heard. Hindi kabawasan ng pagkatao yun lalo na kung nasa tama naman [It does not diminish one’s reputation especially when you are in the right],” she continued.

Solis slammed Gutierrez for her remark, saying, “How can she be so cruel for a second chance to a co-actor like Bong without even thinking if not for the goodness of people she won’t be where she is today.”

The talent manager said Gutierrez should be respectful when giving her opinion, especially when her grandfather Christopher De Leon is friends with Revilla.

The senator will star in “Agimat ng Agila” which is set to air on GMA Network in 2020.