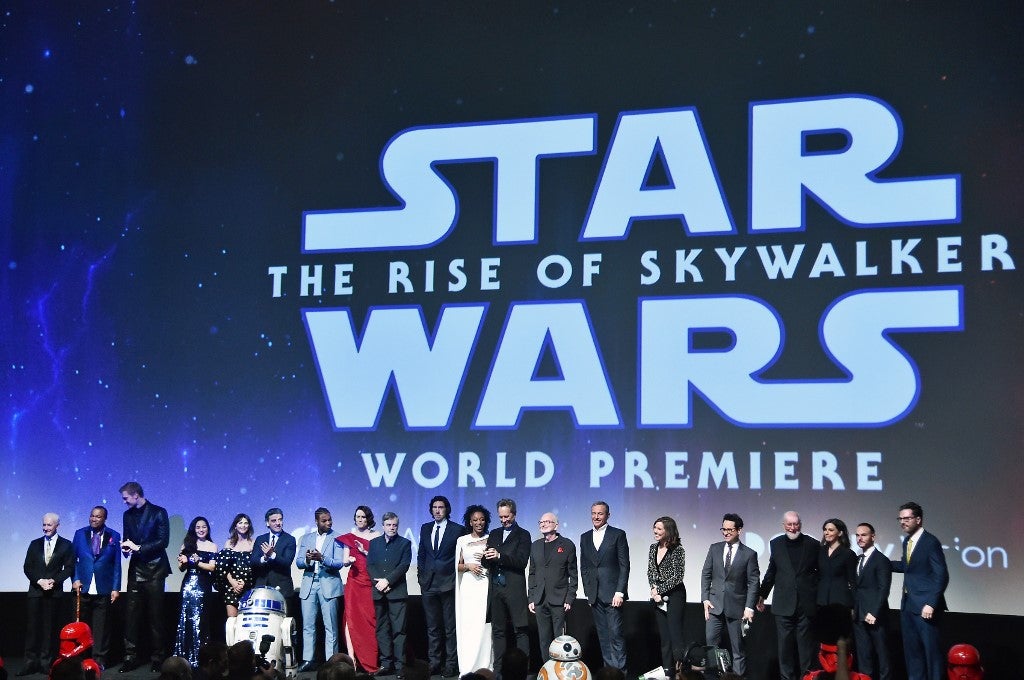 LOS ANGELES, United States — The last survivors of “Star Wars,” created by George Lucas 42 years ago, reunite on the big screen for a final time Friday in the nostalgic conclusion to the epic “Skywalker saga” — led by a screen legend who has departed this galaxy.

“Star Wars: The Rise of Skywalker” serves as a swansong to the genre-defining, nine-film series for stalwarts such as Mark Hamill (Luke Skywalker), Anthony Daniels (C-3PO), Billy Dee Williams (Lando Calrissian) and, in particular, the late Carrie Fisher (Princess Leia).

Thanks to some innovative repurposing of footage shot during the previous Star Wars installments, Fisher improbably remains at the center of a movie released three years after her death.

“The idea of continuing the story without Leia wasn’t a possibility, and there was no way we were going to do a digital Leia,” said director JJ Abrams at a news conference near Los Angeles.

“And there was no way, of course, we would ever recast it.”

But of the original cast, Leia’s return for the new films was perhaps the most central to the plot.

Her idealistic, scrappy young princess from the first films has become a wise mentor to the new generation of Resistance heroes such as Rey (Daisy Ridley) — and the mother of the villainous Kylo Ren (Adam Driver).

Living cast members — including her real-life daughter Billie Lourd — shot scenes and dialogue that could be meshed with those featuring Fisher from the cutting-room floor.

“Ending these nine films, Carrie was such a big part of all that,” said Kelly Marie Tran, 30, who plays plucky Resistance mechanic Rose Tico.

“So for me personally there was a lot of wanting to honor this thing and do right by this thing — and I think that she’s pretty effing incredible in this movie!”

Fisher was not the only “Star Wars” alumnus to die before “Rise of Skywalker.” Peter Mayhew, the original Chewbacca, was killed by a heart attack in April.

But due to his deteriorating health, Mayhew had already passed the reins since 2015’s “The Force Awakens,” to Joonas Suotamo, a 6 foot 11 inch (2.12-meter) Finn.

“When Peter passed this last year I was heartbroken. But I like to think that in this film, I attempted to do him justice,” said Suotamo, who credits Mayhew for giving “Chewie” his distinctive, not-quite-human gait which is instantly recognizable around the world.

“Even if they haven’t seen ‘Star Wars,’ they might know who Chewbacca is, and that’s what I’m a custodian of,” added Suotamo.

For Williams, coming back as the rakish Lando felt almost like stepping into a new role, so unexpected was the big-screen return after 36 years since “Return of the Jedi.”

“I didn’t think that it would happen. I just wrote it off,” he said.

“But when I got the call from JJ and when we met, I just sat down and I just chuckled. I thought it was just a wonderful gift.”

Likewise Daniels, who has appeared as flustered droid C3PO in every “Star Wars” movie, said the loss of his colleagues and end of the films has given him pause to reflect on the scale of what they accomplished.

“It’s like having your nose up against the planet, you can’t see how big that planet is,” he said.

“Finally I get to see it almost from the other perspective… I’m glad to have survived for this long!”

New “Star Wars” trilogies with fresh characters are planned, while the franchise has been given a shot in the arm by the success of Disney TV+ series “The Mandalorian” — and its new breakout star Baby Yoda.

But this finale to the storyline begun in 1977’s original depends on nostalgia and, daunting though it is, stepping back into Chewbacca’s furry suit or a decades-old role is an easier task than shaping a movie around such an iconic and unique character as Leia.

Abrams admits any solution to Fisher’s death would have been imperfect, but insists he is happy with the outcome — and thinks somebody else would be too.

“If we had Carrie around, would we have done some different things here and there? Of course we would have. But we had an opportunity to have Carrie in the movie,” he said.

“We were able to do something that Carrie herself, I’d like to think, would be happy with.

“She is great in the movie, of course. And it’s still emotional, and moving, to think of her and how sad we all are that she’s not sitting here with us today.”