‘The Mall the Merrier’ 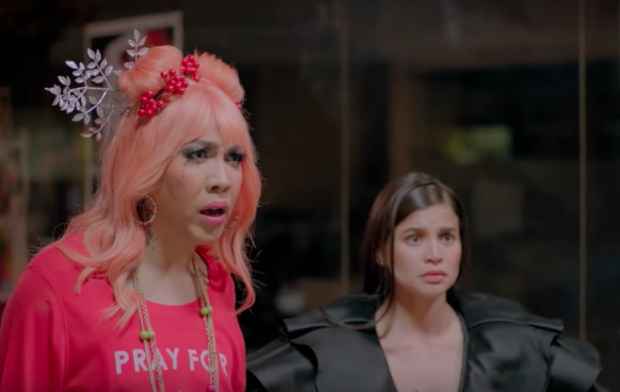 Vice Ganda and Anne Curtis in “The Mall the Merrier”

(Editor’s Note: We are running this guide to help moviegoers plan their holiday cinema tour. The 45th Metro Manila Film Festival runs from Dec. 25 to Jan. 7, 2020)

Vice and Anne play estranged and warring sisters, Moira and Morissette Molina, respectively, whose parents die in a plane crash. How they would renovate and resuscitate their now-aging family mall will determine who will inherit it.

As they quarrel over the property, they accidentally unlock an ancient curse that literally brings the mall to life. They now have to break this curse in order to stop the mannequins, models from posters and tarpaulins, movie characters and other mall figures from creating more chaos.

Vice says the story is based on the 2006 fantasy-comedy film “Night at the Museum.”

This marks Vice and Anne’s first team-up on the big screen, celebrating their 10-year relationship as main hosts of the noontime program “It’s Showtime!”

“I only used to do cameo roles for his past movies,” says Anne. “Those funny moments you see from us on ‘Showtime’ are nothing compared to our scenes here. Even I got surprised at how hilarious this is. I didn’t think I’d be that funny. I know that the madlang pipol will be happy.”

Vice says he helped pick most of the cast members, but he “enjoyed toying with Anne the most. I had so much fun watching her do the wacky things that Direk Barry asked her to do.”—MARINEL R. CRUZ