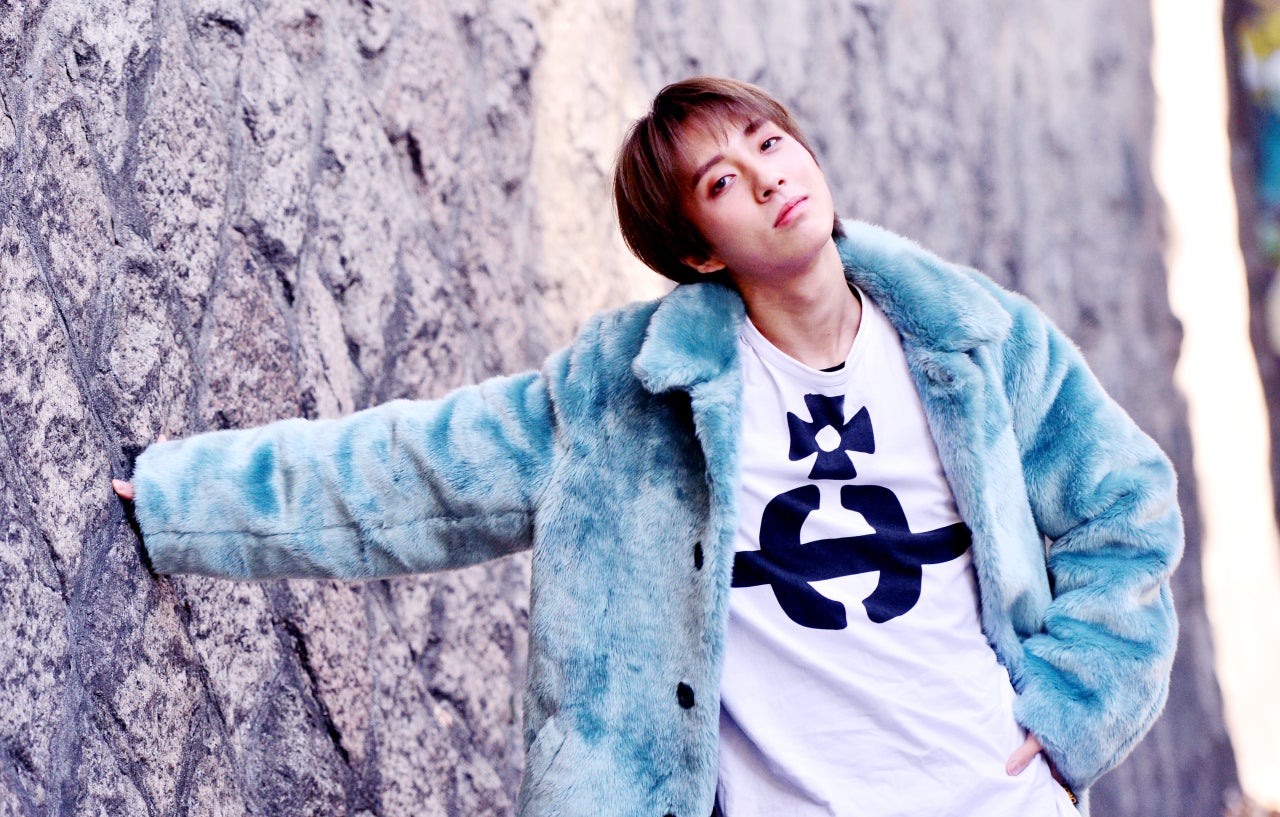 SEOUL — It wasn’t only a bold light blue Supreme coat and fashionable trainers that Holland was sporting that are new. He seemed more confident than ever when we met for the second time late November even as our conversation was on mental health — an issue that has recently sparked debate in South Korea.

“I think agencies need to do more to take care of their artists as K-pop becomes bigger. And instead of being reactionary after something happens, people need to think twice and try to be more respectful when they leave comments online,” the singer said in a calm yet firm tone.

His candid answer is a reminder of how refreshing the 23-year-old singer is in an industry that many see as heavily controlled.

While the answer might be different for K-pop as a whole, for Holland though, 2019 has been a good year.

By the end of December, he’d have released his very first self-titled EP, a new single, and embarked on a Europe tour stopping in five countries, a stark contrast to early last year when he had to save up money on his own to fund his debut single.

“This year, I met a lot of people who helped me get going. After the tour and a break, I want to do well here in Korea. I have this belief that if I do well abroad and come back, people would be more welcoming,” he said.

When I ask what fans can look forward to the most from his first tour, he says closeness. And he means literally, as the shows will be on a smaller scale.

“I love meeting my fans in person. It’s hard to meet them in Korea. If fans follow me on social media and they are seen with me, other fans might automatically think they are part of the LGBTQ community, a stereotype that I was told about by my Korean fans.”

On one hand, it’s disheartening to learn that one of the very few openly gay people in the public eye in this country is worried about accidently outing fans or labeling them gay by association.

On the other, it’s totally understandable — in a country where LGBTQ people face an uphill battle. Only recently, a group of lawmakers in Korea proposed an amendment to exclude discrimination based on sexual orientation as one of the violations of the National Human Rights Commission Act.

And though queerness and romance often take center stage in his songs, his new single, “Loved You Better” highlights something different but still personal — school violence.

He explains the song is like telling the bullies, “You’re done.”

“After I heard the track, I decided to write my story. It was late at night and I was in my room with just a small light on when I was about to begin writing (the lyrics). There are moments when you seem to be able to write lyrics on end and this was one of them since it was my own story.

He got the song first at KCON, and from there, he wrote the lyrics and the storyline for the music video. He also chose the director.

“As you can tell from the lyrics, ‘You tried to kill the last flame in my heart, I didn’t let that happen,’ it’s as if the ego of Holland is awoken after people hurt my feelings as Go Tae-seob (Holland’s real name).”

The single, which was released on Dec. 11, consists of three tracks including the instrumental track and another version featuring Hong Isaac, who appeared on JTBC’s “Super Band.” His voice is featured toward the end of the track.

“It’s very pop and quite heavy on the guitar. It’s not something I have tried before, more of Western pop than K-pop (in terms of sound) and changed the arrangement a little bit to better suit my image as well.”

This is not the first time Holland took on more roles than being a singer in his career.

“Normally, entertainment agencies have A&R — who picks a song, bring a video director, a photographer, a stylist and so on and so forth. When I first embarked on my career, I didn’t have that.”

And with “Loved You Better,” he was soon back to his old ways.

“The new record should have been out three months ago. And there was a team that was formed to take care of me. But the music that was created then wasn’t really well-received by the people around me so we ended up not going with it in the end. Basically, I went back to my old ways and started all over.”

And his efforts to highlight the issue of school violence continues in the video where he revisits a tough time in his life. And the driving force behind this socially charged concept? — He tells me because he cares for children.

“I love children and am very interested in issues surrounding them. I just wanted to shed light on the kids who are exposed to these problems and even myself who has also experienced school violence.

“This has left me with an emotional scar until this day and I began making music with hopes of wanting to overcome this experience and have always wanted to reflect this issue in my music.”

Like many successful LGBTQ people, however, Holland didn’t let bullying stop him from pursing his dreams. And things are looking much better. As an artist, he has gained recognition beyond the music industry.

He’s done photo shoots with multiple international fashion magazine. It was no brainer but when I ask Holland what he thinks about fashion, the answer returned quickly — “I love fashion.”

The singer says he has many friends who are designers, and for him, fashion is another medium to express himself. The fat that he studied photography at university also helps, which means that he’s capable of some directing regarding the lights and cameras.

He also rubs shoulders with celebrity friends including Tiffany Young who DMed him first, beauty YouTuber Pony, as well as Korea’s pop legend and gay icon Uhm Jung-hwa. At the risk of upsetting some fans, Uhm is like Madonna or Kylie Minogue for the Korean gay community.

Who were you most surprised to hear from? I gently ask, to which Holland says with no second thoughts, “Uhm Jung-hwa nuna.”

Holland tells me the two had been exchanging DMs before they met in person through mutual friends.

“There is a girl inside her. I was a little intimidated since she’s a legendry pop star. I don’t get star-struck often but she’s an exception. She’s too nice and loves my jokes. She can do nothing and still has this legendary aura around her,” he smiled.

Talking about having celebrity friends, touring around the world and being on the cover of fashion magazines, it’s tempting to forget that he was a university student only a couple of years ago.

If there is one thing that still affects him the same way, if not more, it’s mental health, he says.

It’s a topic that has dominated the headlines here in Korea following the deaths of two singers Sulli and Goo Ha-ra which garnered media attention around the world, often linking the two for being in an idol group.

“What I realized after I debuted is that before I debuted, like much of the public, I also thought celebrities must be so happy — where they are, how much they earn and the fame and priceless experience. I no longer think that.

So much so that sometimes he says he even questions whether it is all worth it.

“There are so many expectations placed on especially young female celebrities,” he says, before adding that he also has a similar experience. He says when he finishes an interview, he’s worried about what his interviewer might think of him, which makes him stressed out and depressed.

“I feel like, in Korea, there is such stigma attached to mental health problems. It’s portrayed in a very negative light if someone is found to be suffering from depression and I think it’s very wrong.

And as someone who believes in talking about one’s mental health and reaching out to people during a hard time, he was thankful for HyunA’s recent Instagram post where the female singer opened up about her diagnosis of depression.

Her candid post on Dec. 28 has been flooded with support and praise from fans and fellow singers including Sunmi who told her to stay strong.

“I just think it’s brave of her to be in the position that she is in to share her struggles with fans. I was just relieved and learned once again that she is a good person. I hope that her post makes it easier for other artists to discuss their mental health, whether “it’s through music or social media. I think that’s why her post was liked so much.”

Despite how common it is, many people still choose to battle with mental health quietly and Holland says finding people to confide in is especially difficult for idols.

“Non-celebrity friends will not understand since they are in different places. I don’t really share my struggles with friends from high school since we are in a different place in life and the way we think is different.

While it might not be easier said than done, Holland joins many others in encouraging people to speak about their mental health.

“When you are having a hard time, you should let people know. If there is someone like that around you, you should listen to them and talk together to support each other.”

As the interview nearly comes to an end, I try to lighten up the mood by moving the conversation toward a more positive topic that is #HarlingSelcaDay — a hashtag Holland uses to encourage his fans, known as Harlings, to share their selcas — a Korean term for selfies.

And the singer explains the hashtag is part of his effort to spread self-love and body positivity. Again, Holland is practicing what he preaches. After all, he once caved into skinny-shaming, drinking what he recalls as “tasteless” powdered milk and protein powder to gain weight, before learning to appreciate his natural looks.

“I get told by people around me that I’m too skinny and I should eat more. In the past, I hated it so much that I wouldn’t wear T-shirts. I’d only wear long-sleeves because I didn’t want to show my arms. Come to think of it now, I think this kind of thinking was eating away at me. Now I’m completely different. I don’t really care anymore.”

Instead, he’s now thinking of how to accentuate what he has and focus on the positive.

“If I’m skinny and I can model the clothes better, I’ll try to do more of that. If you are plus-size, there are things you can do better — like moving your body in a way that is more powerful. Look at Lizzo, it’s hard to top her stage presence.”