Golden Globes nominees’ reactions include a shoutout to PH 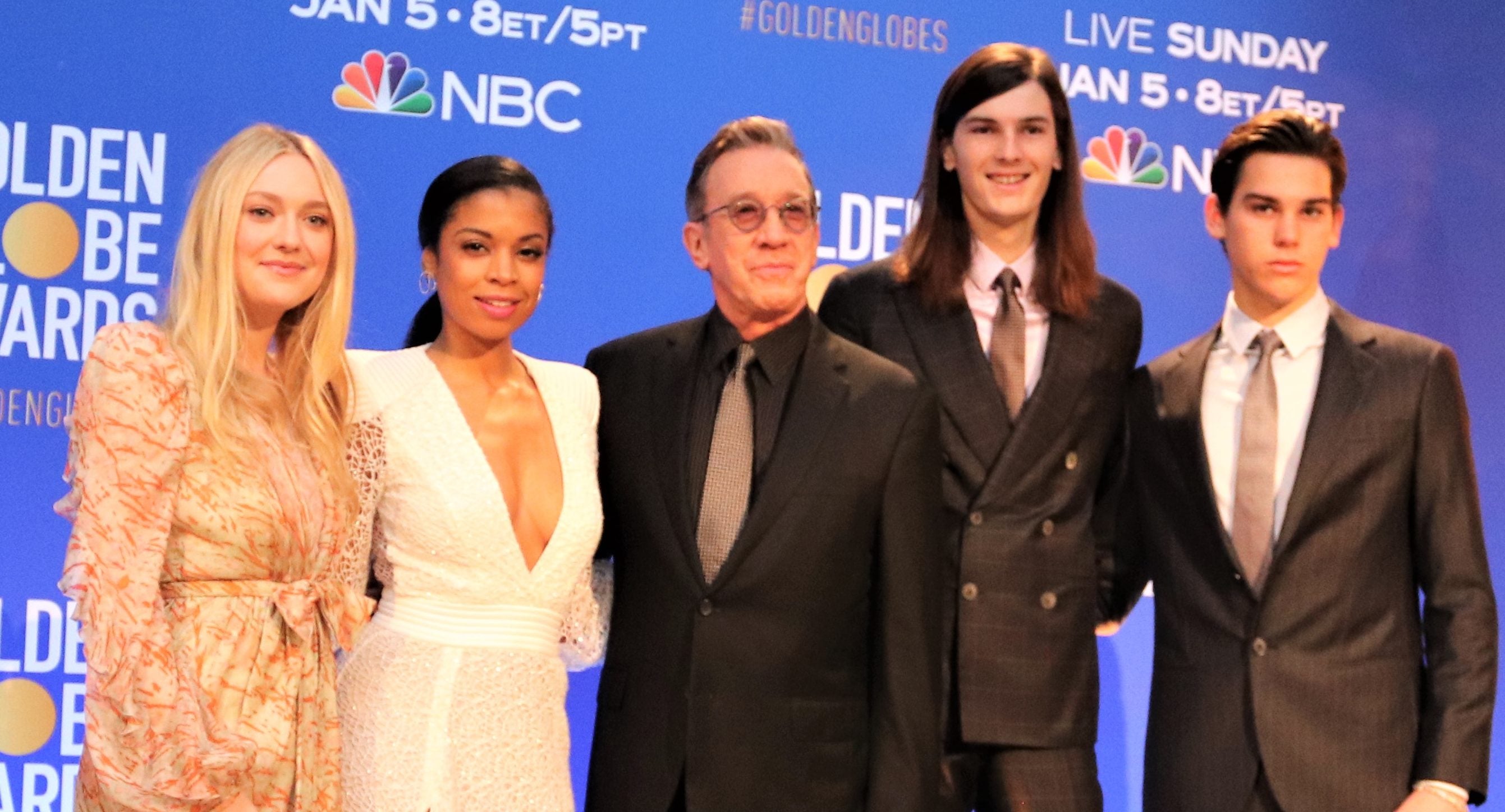 LOS ANGELES—“A special shoutout to our fans in the Philippines for your loyalty and love!”

Robert “Bobby” Lopez and Kristen Anderson-Lopez exclaimed in reaction to their third Golden Globe Awards best original song nomination for “Into the Unknown,” sung by Idina Menzel and Aurora in the soundtrack of “Frozen II.”

Fil-Am Bobby and Kristen, cited previously for “Let It Go” (from the first “Frozen”) and “Remember Me” (from “Coco”), emailed, “We couldn’t be more grateful to the HFPA (Hollywood Foreign Press Association, which presents the Golden Globes) for once again inviting us to the party—and what a party it will be this year!

“We were so lucky to get to work with our muse, the iconic Idina Menzel on this song, and also the incredible Aurora. Thanks to Chris Buck and Jennifer Lee (directors) and Disney Animation for their support and generosity and bringing us back again to work with Anna and Elsa.”

The prolific husband and wife were among the talents who woke up early morning last Dec. 9 to the happy news that they have been nominated to
the 77th Golden Globe Awards, which recognize excellence in film and television. Hollywood’s party of the year will be on Jan. 5.

Many of the nominees reacted with humor and excitement, with “Jojo Rabbit’s” Taika Waititi quipping that news of his Golden Globes nomination
was one of the two things (the other is fire alarm) that he doesn’t mind interrupting his “beauty sleep.”

Leonardo DiCaprio, actor–musical or comedy, “Once Upon a Time … in Hollywood”:

“Once Upon a Time … in Hollywood” is a celebration of cinema, a film that would not exist without the vision of Quentin Tarantino. It is a love letter to the city of Los Angeles and the people who make this industry so incredibly special.

I am so honored by the three nominations and thank the HFPA for recognizing our film. This couldn’t be possible without the excellent work by,
and wonderful collaboration with, my actors, department heads and crew.

“Hustlers” was a labor of love, sweat and perseverance that was written, directed, produced, edited and starred a group of badass women. I am
proud and honored to represent them and this film.

(In addition to the official statement above, she emailed a video message. JLo—beaming, sans makeup, hair simply tied in a bun on top, wearing a gold and black robe, gushed, “Oh my God, it has been more than 20 years since I was nominated for ‘Selena’!”)

It’s so cool that one of the most fun, fulfilling creative experiences I’ve ever had is being honored in this way.

Taron Egerton, actor-musical or comedy, “Rocketman”: The chance to share Elton’s (John) story in this way has been the opportunity of a lifetime. I am humbled by this recognition and immensely proud of the entire filmmaking team that helped bring “Rocketman” to life.

Elton John and David Furnish, film-musical or comedy (they were producers) and original song (by Elton and Bernie Taupin), “I’m Gonna Love Me Again,” sung by Elton and Taron:

We are thrilled to bits that “Rocketman” has been nominated for Golden Globe Awards. We are grateful to have worked alongside so many talented artists and craftspeople to bring Elton’s extraordinary life story to the big screen.

There are only two things I let interrupt my beauty sleep: fire alarms and the Golden Globes nominations. Thank you for acknowledging that comedy can be a powerful tool against hate and supporting “Jojo Rabbit.” Congrats to everyone who worked on the film, especially to our Jojo,

Roman Griffin Davis, for his well-deserved nomination. Roman Griffin Davis, the young lead of “Jojo Rabbit,” scored a couple of firsts–his first Golden Globe nod (actor, musical or comedy) on his first-ever screen performance. At 12, Roman is one of the youngest nominees in the Globes’ history:

I am amazed and so grateful. Playing Jojo Rabbit was the most important experience in my life.

My congratulations go out to Joe Pesci for his nomination, as well, and I’m deeply thankful to Robert De Niro who gave me the opportunity to be in this film. My congratulations also to our director Martin Scorsese for his great vision.

Awkwafina, cited for actress-musical or comedy for “The Farewell,” is the sixth actress of Asian heritage to bag a nomination in her category:

Just woke up to this exciting news. I am incredibly honored. I am beyond grateful, and to be grouped with such insanely talented actresses. I grew up
watching the Golden Globes every year, cheering for my favorite films and actors. It is surreal that I now get to go! Wait, I do get to go, right?

It’s wonderful to have this incredibly personal film recognized. This is a film that doesn’t easily fit into a box. I love that we can be part of a bigger conversation about what it means to be American when you’re between two worlds.

Eddie Murphy, actor-musical or comedy, “Dolemite Is My Name”:

This film was 16 years in the making, and was a true labor of love for everyone involved in its creation.

I am eternally grateful to Greta Gerwig (director) for her guidance and partnership, and for her fierce perseverance that brought this incredible cast together and created an environment for us to become a real family and tell this very special story.

Ana de Armas, actress–musical or comedy for “Knives Out,” scored her first Globe nod. The new Bond Girl in “No Time to Die” said:

I am so overwhelmed and excited to receive my first Golden Globe nomination that I can hardly believe it is true.

Charlize Theron, actress-drama for “Bombshell,” which is one of the first films to grapple with #MeToo:

As a producer on “Bombshell,” I feel extra grateful about my nomination today and also the one for Margot Robbie. We fought to get this movie made
because we thought now more than ever this was an important story to tell.

Thank you for this beautiful nomination amongst the most extraordinary women.

I am beyond excited and honored to be nominated for my first ever Golden Globe along with our series!

Also a first time nominee in Ben’s category was Ramy Youssef, for “Ramy”:

(Like JLo, he sent a video message which he shot on the set of his series that morning.)

Mahershala (Ali, who was teasing him in the back) is a little upset that he was not nominated this year. He’s been flexing about his Oscars and what-not. This is a big deal.

I’m thrilled at the news of the nomination this morning, in particular because I tried really hard!

Billy Porter, actor in a series– drama nod for “Pose”:

Thank you for seeing “Pose” and helping to illuminate and share our stories with the world. The category is … love!

Nicole Kidman, actress in a series-drama for “Little Big Lies”:

I am headed to the set of “The Prom” for the first day of shooting. I am about to see Meryl (Streep) and can’t wait to give her a big hug! Thanks for
everything you have done for “Big Little Lies” Season 2 and its subject matter.

Kirsten Dunst, actress in a series-musical or comedy, “On Becoming a God in Central Florida”:

I am so honored to be nominated along with the other incredible actresses in our category—best 5 a.m. news ever!

Christina Applegate, also nominated in the same category for “Dead to Me,” summed it all up for the nominees:

What a way to wake up! Holy moly! I’m so humbled!