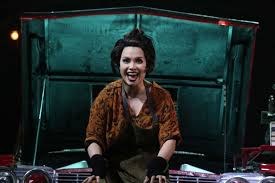 The author in “Sweeney Todd”

To my dearest “Sweeney Todd” family, it is with much exhilaration and melancholy that I write this missive to you on the day after our closing performance in Singapore.

For the last however many months we have breathed this masterpiece placed upon our laps by Bobby Garcia, aided and abetted by Manman Angsico, Cecile Martinez and Gerard Salonga (assisted even further by Steven Conde, Arman Ferrer and Teetin Villanueva). And we have triumphed.

Never mind that upon the first sight of this intricate and complicated score, our eyes crossed and our brains ached. That even fully armed to the teeth with skills that took years to hone, one look at any of the show’s music would have us gnashing our teeth from frustration.

One song would take a few days to figure out, and even longer to master, what with all the frequent dissonances, unconventional harmonies, challenging counterpoints and seemingly random changes in time signature. It almost felt like going into battle.

However, as we have all discovered, there were patterns that made sense, and with each passing day in the rehearsal room and onstage at The Theater at Solaire and the Sands Theatre, Sweeney found its way into our bones.

And we did this as a company, as a bonded unit, as a group of human beings that perhaps due to insanity, took on the task and did it all beautifully.

However, this letter is less about our collective accomplishment, as easy as it is to wax poetic about it all. I would much rather remember the humanity, the massive hearts that beat within each and every one of you.

There was much wisdom in casting this show (for this, we must thank Bobby without reservation), from every principal player to everyone in the ensemble.

Sure, there were practical choices in Steven (associate director), Arman (associate vocal director) and Dean Rosen (dialect coach), who could maintain the show during the run while also performing in it. But what about everyone else? How on earth did Bobby bring this specific group of human beings together?

Save for maybe a couple of us, we’ve all performed extensively in previous Atlantis shows (Jett Pangan, Nyoy Volante and I began our relationship with Atlantis in 2002 in three different productions), so perhaps part of it is Bobby’s intimate knowledge of who we are and how we work as individuals (while crossing his fingers for the newbies). He knows us, our work ethic, our degree of musicality and what we’ve each brought to the musicals we’ve done. Still, that doesn’t account for our chemistry and eventual camaraderie.

Maybe I’ll never arrive at a satisfactory answer, no matter how long I end up mulling over the why, so perhaps it is best for me to just say a huge “thank you” to the Universe that we were placed in this one show.

Just watching every single cast member have each other’s backs onstage… the roars of laughter at breakfast, in the hallways and in the green room… the quickness in quoting a random line from the show to suit any occasion… the tight hugs backstage… the very active online chat rooms… late night conversations to calm the nerves and soothe the soul… glasses of wine and spirits… mischief, mischief, mischief… the level of kindness radiated and the care extended.

I’ve been doing this thing called musical theater for a very long time, but this experience is unlike any other. Never have I worked this hard, been this exhausted, and felt this fulfilled. “Sweeney Todd” is a gift I shall cherish forever, not only for the work, but also for the friendships that have come out of it.

You all have my utmost respect and love. And wherever we go, whatever we do from here, we shall always have that tonsorial parlor and meat pie shop.

Thank you all for being you. Until next we meet, when our right arms are complete again, swing your razor wide and be the badasses you are.

I am proud and grateful to know you.

(And a special note for the late Liza Camus after whom our show’s red El Camino was named… at every performance, you were honored, present and remembered with love. We miss you.)