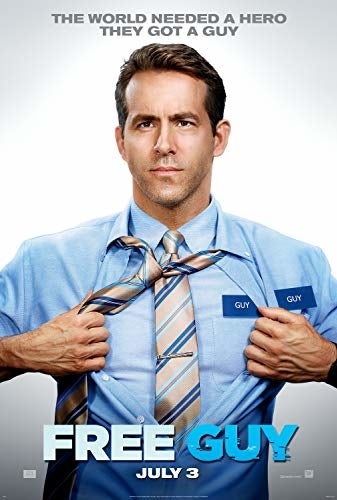 When video game character Guy puts on a pair of glasses taken from a bank robber, he realizes that he’s living inside a video game.

Starring Ryan Reynolds of “Deadpool” and directed by Shawn Levy of “Stranger Things” and “Night at the Museum,” the film “Free Guy” takes place inside a video game that looks a lot like some of the world’s most popular titles.

It’s set in Free City, a simulated city that allows players to wreak havoc as they please — jet planes swoop between tower blocks, while hold-ups and bank heists are an everyday occurrence for its virtual citizens.

Guy, however, has begun questioning his own role as an upbeat bystander to all these events, and when he turns the tables on a gun-toting bank robber, he comes into possession of a pair of augmented reality spectacles that let him see the world as players do.

Then he decides to become Free City’s biggest hero: a decent, kind-hearted person in a cynical world. As the trailer shows, he teams up with one of the game’s programmers, Milly (Jodie Comer from “Killing Eve”), in order to achieve that goal.

The movie is targeting a worldwide release the week of July 3, 2020.

Free City is presented as a blend of the skydiving, dancing and military aesthetic found within “PlayerUnknown’s Battlegrounds” (aka “PUBG”), “Knives Out” and “Free Fire” — a Battle Royale genre made most famous by the softer, more caricatured “Fortnite” — with aspects associated with Open World action games, in which players can run riot in the company of friends and strangers, such as the “Grand Theft Auto” and “Saints Row” franchises, plus heisting challenge “Payday 2.”

Movie distributor 20th Century Fox became part of the Disney company in March 2019, allowing the trailer to lead with a “Deadpool”-style jab that “Free Guy” is from the studio that brought out “Beauty and the Beast,” “Aladdin” and “The Lion King” — twice.

The trailer arrived just as Skybound Entertainment, the media company founded by “The Walking Dead” creator Robert Kirkman, announced that it had made a deal with another prominent YouTube and Twitch personality, Guy Beahm, to make an episodic series based on his on-screen persona, Dr DisRespect. NVG

WATCH: Biblical game where you play as Jesus Christ to come out soon on Steam