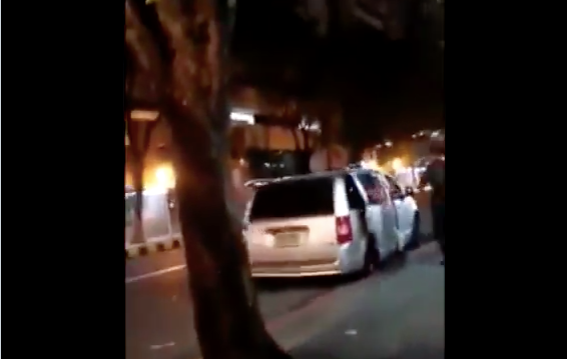 The abduction of a Chinese woman on Dec. 9 was captured on video.  Image: screenshot from original video on Twitter.com/@MiguelPoblador

Following reports of the abduction of a Chinese woman in Makati late evening yesterday, Dec. 9, some celebrities are asking the public to take safety measures, while others are holding the government accountable.

Didn’t he promise you safer streets?

Padilla followed her tweet with a screenshot of an article, from which she quoted Cayetano: “By January 1, 2017, if hindi pa safe ang ating mga kalye, kami ay magre-resign (If by January 1, 2017 our streets are still unsafe, we are going to resign).”

(Those working at call centers seem like they are in Singapore. You can walk outside at 1, 2 or 3 o’clock, ride a taxi, you would not be afraid to get harassed or mugged.)

Singer Leah Navarro blamed the administration’s “impunity” for the incident.

“Scary. A brazen act, thanks to the current impunity practiced by this admin,” she tweeted today in reply to a tweet of one @YellowPadawan, who shared a news report of the abduction to Navarro.

Thanks, kiddo. Scary. A brazen act, thanks to the current impunity exercised by this admin.

The Twitter user then suggested that it could not be determined for sure if it was kidnapping or “setup for actual martial law,” to which Navarro replied: “I’m not about to make assumptions about this kidnapping, Rache. All I know is that security is not as good as touted by this admin.”

“Let’s pray that this lady will be saved from her captors soon,” Navarro added.

I’m not about to make assumptions about this kidnapping, Rache. All I know is that security is not as good as touted by this admin. Let’s pray that this lady will be saved from her captors soon.

Following his tweet, Dumas took a jab at the President: “Name a bigger scam than Duterteism.” He, however, did not elaborate so as to relate it to the abduction incident.

Name a bigger scam than Duterteism.

Jasmine Curtis-Smith also advised the public to bring self-defense tools, such as pepper spray, as posted on her Twitter earlier today.

“Please stay safe. Be aware. Bring pepper spray or anything that is similar,” she said.

Please stay safe. Be aware. Bring pepper spray or anything that is similar 😔

The woman and her abductors, believed to be Chinese as well, are yet to be identified or found, as of posting.  /ra