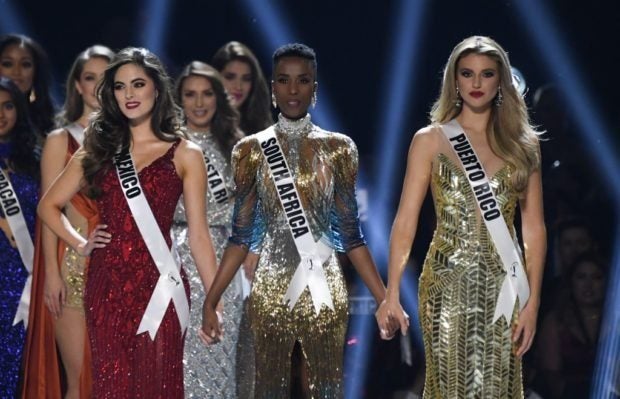 Amid Philippine bet Gazini Ganados’ early exit from this year’s Miss Universe, local celebrities found another beauty to root for, and it turns out that they chose right — South Africa’s Zozibini Tunzi, the newly-crowned Miss Universe.

“You deserve it you are beautiful inside and out! Congratulations Miss South Africa!” she said.

You deserve it you are beautiful inside and out! Congratulations Miss South Africa! pic.twitter.com/T84Q7LcPlU

Medina is also a fan of Miss South Africa’s advocacy, and the former did not shy away from letting her fans and followers know.

“You made me cry with your last speech!!!” she said in a tweet referring to Tunzi’s closing statement in the pageant. “More than a good example of a Beauty and brains! You are a Queen!!!”

“Power! You are such a leader!” she added.

You made me cry with your last speech!!! 😭😭😭 more than a good example of a Beauty and brains! You are a Queen!!! https://t.co/sWcWohJ2rI

In her statement, Tunzi stressed that it is time to break the stigma of society’s perception of people of color as “never considered to be beautiful.”

“I grew up in a world where a woman who looks like me – with my kind of skin and my kind of hair – was never considered to be beautiful. And I think that it is time, that that stops today,” she said. “I want children to look at me and see my face, and I want them to see their faces to be reflected in mine.”

Television host and former volleyball star Gretchen Ho had the same sentiments as Medina, saying that South Africa’s win was “well-deserved,” as seen in her tweet earlier today.

“I have several friends from South Africa. Her win will, for sure, give many people out there HOPE,” Ho said.

Well-deserved 👸🏾 I have several friends from South Africa. Her win will, for sure, give many people out there HOPE. 🔥 #MissUniverse2019 👏🏻 https://t.co/RBWtmbYsqW

Actress Agot Isidro meanwhile had been rooting for South Africa since before the latter won, as seen on Isidro’s tweet also earlier today.

“South Africa for me. May nanalo na ba (has anyone won)?” she said.

South Africa for me.

Isidro lauded Tunzi’s answer in the Q&A portion, where the latter emphasized that leadership is the most important thing that needs to be taught to young girls today.

Tunzi also stressed in one of her answers that women should be given the opportunity to lead, as they are “the most powerful beings in the world.”

“That is what we should be teaching these young girls: to take up space. Nothing as important as taking up space in society and cementing yourself,” the newly-crowned Miss Universe added.

“SOUTH AFRICA FTW (for the win)!!!!” she said, also referring to a the clip of Tunzi answering as posted by Miss Universe’s official Twitter account.

TV host and comedian Vice Ganda had also been rooting for South Africa before she won, as seen on his series of tweets earlier today.

(I love South Africa!!! I find her extremely pretty! But you cannot fool me, you are that warrior from Black Panther!)

“For me its South Africa!!! For me lang naman (only),” he said in another.

For me its South Africa!!! For me lang naman. #MissUniversePhilippines2019

“Iba ang tindig at presensya ni South Africa. May taglay na husay (South Africa’s stand and presence is really something. She has talent)!!!” he added.

Artist and model Solenn Huessaff also expressed her support for Tunzi even before she won, as seen also on her Twitter post earlier today.

“South Africa got this,” she said.

South Africa got this #MissUniverse2019

‘Go get that crown’: Pia Wurtzbach cheers on Gazini Ganados