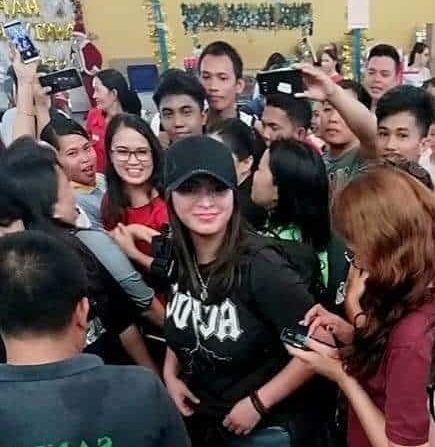 TACLOBAN CITY –– Actress Angel Locsin just made the typhoon-weary people in Northern Samar happy on Saturday, Dec. 7 when she made a surprise visit.

Rei Josiah Echano, provincial disaster risk reduction management officer of Northern Samar, said someone got in touch with him that a group would be visiting the provincial capital of Catarman, which was badly affected by typhoon “Tisoy.”

He didn’t know that it was the group of Locsin.

“I told them that I could provide them trucks for their relief operation. Had I known that it was Angel Locsin’s group, I could have done more” he said.

“The people were happy (to see her),” Echano added.

Echano confirmed that Locsin went to a grocery store in Catarman, where she bought food items that she later distributed to typhoon victims in Catarman.

The actress also went to the nearby town of Allen, which also suffered major damage due to Tisoy.

Locsin, who arrived at the Catarman airport on Saturday morning, went back to Manila in the afternoon.

But her brief visit to the province badly hit by Tisoy created a stir on social media as various photos of the actress were shared on Facebook.

One of these photos showed the Kapamilya actress, wearing a ball cap and a t-shirt, inside a grocery store.

She appeared to be buying some grocery items, which were given to the victims of Tisoy, the deadliest typhoon to hit Eastern Visayas this year.

It was not clear who was with the 34-year old actress who was recently named by Forbes Asia for her relief efforts during disasters, among other causes, donating P15 million for the last 10 years now.

Her visit to Catarman received positive feedback from netizens, particularly those from the province still reeling from the impact of Tisoy.

“She is really an angel,” said one user.

Mae Rea Rios wrote on her Facebook account: “Darna is to the rescue. God bless your genuine heart.”

“Thanks, Ms Angel Locsin for extending help to my kapwa Nortehanon…You are truly an angel. God bless you,” wrote Ana Pelito Alolor. /lzb