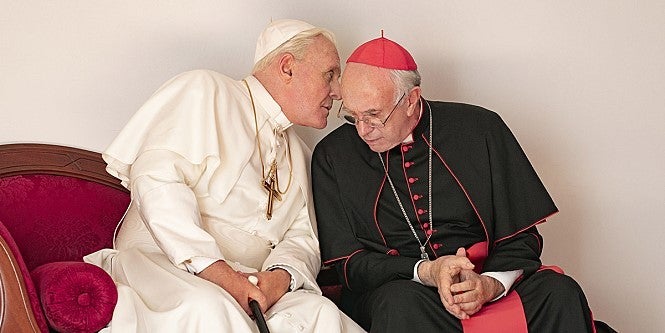 “The Two Popes” Netflix via The Korea Herald/Asia News Network

SEOUL — This was honestly not what I expected from a film about papal succession: a delightful buddy film about an unlikely friendship that took place — of all places — at the Vatican.

Forget about grappling with faith or messages about the Catholic Church reaching out to the world in a humble way.

“The Two Popes” director Fernando Meirelles has created a perfectly riveting drama brought to life by the fascinating back-and-forth performance by Anthony Hopkins and Jonathan Pryce.

Their less-than-friendly initial contact develops into a heated discussion between progressive and conservative views, and their back-and-forth encounters spill over to theological discussions on the issues of the world, amicable chats about The Beatles, and confessions about inner struggles.

Except for the basic facts, such as Bergoglio succeeding Benedict XVI to become Pope Francis, the film is mostly fictional. It is very unlikely that such meetings ever occurred or took place in a fashion depicted in the movie.

Writer Anthony McCarten took the liberty to imagine a series of deep conversations between the two that is highly entertaining and gives the viewer a lot to think about.

The film touches on some of the darker issues that surround the Vatican. Sexual abuse by priests and the Church’s failure — or lack of will — to take action are raised, with the cardinal saying, “We are no longer part of this world.” He mentions how such actions leave scars that mere mercy for the sinner does nothing to heal.

What stands out is how the director paces the story with the interaction between the two figures. Cardinal Bergoglio is a cheery, vivacious figure who loves soccer and enjoys the company of others. On the other hand, Pope Benedict is a loner who retains a solemn attitude toward the rest of the world.

Yet, the lively exchanges between the two characters propel the story forward, pushing them gradually toward facing their own demons in their quests for faith. This chemistry was what made the film very enjoyable. The best part of the film — actually most of the film — was watching these two actors sit and talk.

A weak point in the film was the flashback to Cardinal Bergoglio’s actions during the Argentinian dictatorship of the 1970s. It would have been much better if the scene had been acted out as dialogue between the two characters, instead of being reenacted as a flashback.

Pope Benedict’s confession, with no flashbacks, was tender and quiet but led to a very powerful moment, with the weight clearly visible onscreen.

But this is a very minor issue in what I felt was a powerful drama and an enjoyable film with strong characters, filled with memorable moments.