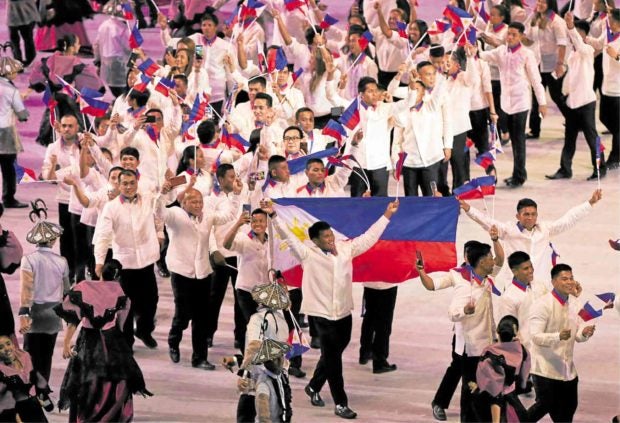 “Manila” was played during the parade of athletes. —LYN RILLON

Who’s behind the use of Hotdog’s hit song “Manila” during the parade of athletes at the opening ceremonies of the 2019 Southeast Asian (SEA) Games program at the Philippine Arena last Saturday?

The song “Manila” by Hotdog was offered to be used during the ceremonies by Greg Garcia, deputy director general for support of the Philippine Southeast Asian Games Organizing Committee (Phisgoc).

This was according to Eloisa Matias, music producer of the SEA Games opening ceremonies.

“He said, ‘Use it anywhere,’” Matias recalled Garcia’s instructions.

Greg Garcia, who is also the Bases Conversion and Development Authority board chair, is the brother of Dennis and the late Rene Garcia—Hotdog band members who wrote the song, “Manila.”

(Editor’s Note: The use of the song “Manila” during the parade of athletes at the opening ceremony has been criticized by Davao City Mayor Sara Duterte, stressing the need for inclusivity since the Philippine flag was being carried. “Di po ba Philippine flag ang dala? Why would you play the song Manila? Did Lapu-Lapu die for Manila? Wag po natin gawing excuse ang upbeat danceable song,” Duterte said in an Instagram post last Sunday. “We should be inclusive when we want to encourage our countrymen to cheer.”)

The show for the SEA Games opening ceremonies was a unique assignment for Matias, who was tasked to produce the music created by National Artist for Music Ryan Cayabyab for the event. Among Matias’ previous credits include being the long-time executive producer of “The Sharon Cuneta Show,” and producing albums for Zsa Zsa Padilla, Martin Nievera and Randy Santiago.

Matias was in charge of supervising the recording of not only the songs the singers would be singing, but also music for the flag procession and all the other musical elements of the program. The process was very tedious.

“The fact that I had to satisfy an international audience using local music was a tall order,” Matias admitted. “[The challenge was] how to arrange the songs so that they sounded new without losing the identity of our music and culture. More than that, they had to have universal appeal.”

She elaborated, “The cultural opening songs were the ones originally danced by the Ramon Obusan Folkloric Group (ROFG). We had five layers of recorded music. First was the original music recorded by ROFG. The second was studio recording; they brought all the authentic instruments—agongs, dabakan, kulintang. All percussions.

“The third layer was when Nikko River arranged all the segues. The fourth layer was another recording of more percussion instruments. Then, we recorded live songs of the Bagobo shields, the shouts, the castanets, the stomping of feet, etc., at the Philippine Arena.”

Matias also had a hand in choosing the songs in the repertoire. “For the cultural opening, the music was from the Ramon Obusan Group. I merely expanded the arrangement,” she explained. “The songs of the hip-hop medley started with the kundiman, ‘Minamahal Kita.’ There were a lot of love songs to choose from, but I settled for this since I find the melody beautiful. The hip-hop segment was a homage to Francis M. Even the version of ‘Tayo’y Mga Pinoy,’ sung by KZ (Tandingan), was Francis’ version… The finale, of course, was the SEAG’s theme song, ‘We Win As One,’ composed by Ryan Cayabyab and written by Floy Quintos.”

The singers were beaming with pride while they sang to honor the Filipino athletes and represent the Filipino nation. “It was surreal,” recounted Jed Madela. “Holding back tears is one difficult thing when you’re singing. I was just beaming with so much pride.”

Anna Fegi, who performed in the finale, revealed: “It was hard not to be overwhelmed by emotion. This was not just an everyday performance. We were representing our country.”

For a brief moment, affiliations, controversies and crises were set aside in favor of love for country.

“I felt a sense of unity for that one moment,” said Christian Bautista. “It was glorious.”

For them, the event was a high point in their professional lives. FiveCurrents’ creative director Libby Hyland had worked on big international sports ceremonies before—from Los Angeles to Sochi to London to Jakarta—and yet, she considers her experience in the Philippines as one for the books.

“I’ve been around the world and seen a lot of different ceremonies. [But] I can honestly say this is the highlight of my career,” she said.

Preparations for it began early. Creative director Floy Quintos started writing the concept in 2018. Singers were contacted around April of this year to firm up the artist lineup.

“They [production team] needed to confirm our availability that early because this was such a huge undertaking,” Fegi recalled.

Aside from Madela, Fegi, Bautista and Tandingan, the other Filipino singers who took part in the opening ceremonies, were: Lani Misalucha, Aicelle Santos, Elmo Magalona, Iñigo Pascual, TNT Boys, Robert Seña and Apl.de.Ap.