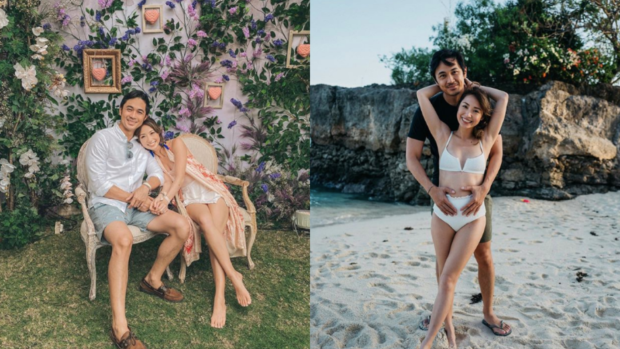 Vlogger Kryz Uy and Slater Young will be first-time parents soon, as they revealed that they are expecting their first child over the weekend.

Uy broke the news, and detailed how she discovered she was pregnant, through a vlog post on her YouTube channel last Saturday, Nov. 30.

The vlogger said she had been thinking she was pregnant since she flew to Manila to attend blogger Laureen Uy’s birthday party in October. At the time, she admitted she was not feeling well, and felt more irritable than usual. The morning after, she decided to act on her suspicions and bought two pregnancy test kits from a nearby pharmacy.

Uy was in tears when both tests showed that she was pregnant. Since Uy was alone in Manila at the time, she decided to keep the secret to herself until she returned to her home with Young in Cebu. Upon reaching their house, Uy handed Young a brown paper bag which contained the two used pregnancy test kits. When Young realized that the tests confirmed Uy’s pregnancy, the couple embraced.

Young later revealed that he is hoping their first child will be a boy, while Uy would want to welcome a baby girl into their home. However, Uy said that any gender would be fine as long as the baby is healthy.

Young also took to his own Instagram page yesterday, Dec. 1, to share the news with his fans and followers.

“Secret’s out! This is it @kryzzzie!” Young said in his post alongside a photo of him holding Uy’s baby bump while they are on a beach.

Secret’s out! This is it @kryzzzie! ❤️

The couple tied the knot last February in an outdoor ceremony in Cebu. JB

Read Next
Start the Holiday Season with Pop Life TV on BEAM TV!
EDITORS' PICK
Quick chat with Nicole Andersson: ‘You really don’t need much to be happy’
IATF to LGUs: Issue ordinances vs attacks on frontliners, COVID-19 patients
Diokno to Duterte: OK to make fun of buck tooth, but focus on people’s needs first
Nograles: Cabinet members to donate 75% of monthly salary to aid COVID-19 fight
10 Filipinos positive for COVID-19 in UK, 7 in Ireland — envoy
Robredo spox thanks Duterte for defending VP’s efforts vs COVID-19
MOST READ
Gov’t mulling quarantine period extension of 15-20 more days
Coronavirus hotbed Rizal to shut borders on April 6
ADB warns PH against prolonged lockdown
Sotto on Isko Moreno’s call: We do our job without the media following our every move
Don't miss out on the latest news and information.

Village frontliner dies after ambulance with pregnant onboard crashes