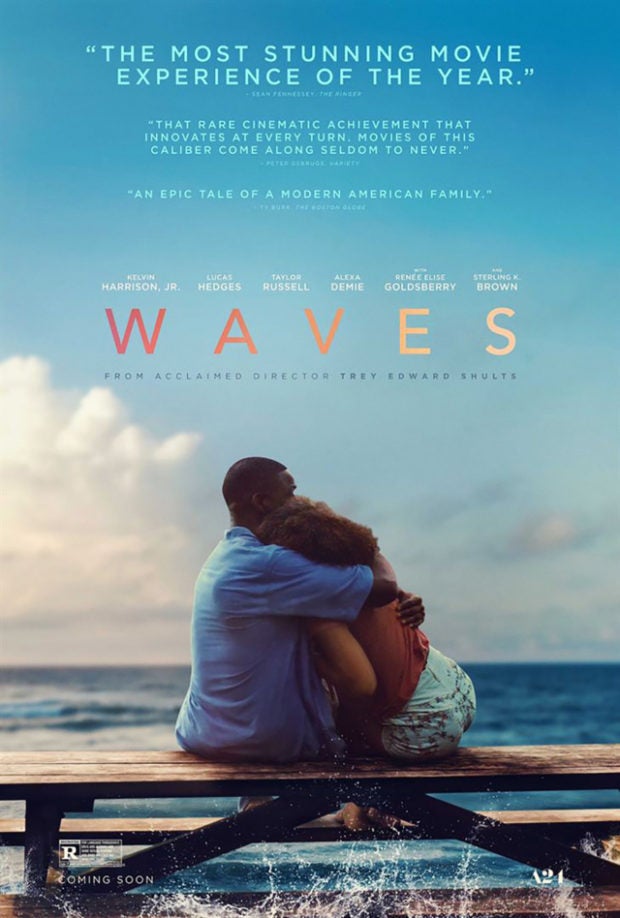 The “Waves” movie poster. Image: Courtesy of A24 via AFP Relaxnews

Reeling from the #MeToo movement, Hollywood has put toxic masculinity under the spotlight this year with a batch of Oscars contenders zeroing in on the father-son dynamic.

From Joaquin Phoenix in “Joker” to Brad Pitt’s “Ad Astra”, A-listers have flocked to roles that highlight the damage caused by sons’ quests for their fathers’ approval.

But none have confronted the theme more brutally and personally than “Waves”, the indie coming-of-age teen drama being tipped as an Oscars dark horse.

The film, portraying a black middle-class family in Miami which implodes following a tragedy, has been hailed as “a knockout” by  The New York Times and an “intimate epic” by The Hollywood Reporter.

Director Trey Edward Shults modeled the film’s strict patriarch on his own stepfather, whose overzealous coaching results in a hideous high-school wrestling injury — a trauma which is dramatized in the movie, and leads to devastating consequences.

“It is a cautionary tale of the traditional idea of masculinity,” Shults, 31, told Agence France-Presse. “We don’t have to build these tough exteriors — we can be vulnerable, we can communicate.”

Described as a “Dazed and Confused” for the Instagram generation, the film shows how the expectation that teenage boys be strong, silent and stoic endures in American culture.

It was released this month by A24, the indie production house behind Oscar-winner “Moonlight”, with which “Waves” shares its setting and several themes.

Shults said he forged the central character after swapping stories with star Kelvin Harrison, whose musician father tried and failed to push him to follow in his footsteps.

“We would do these sort of intense therapy sessions… him talking about his father’s state of mind, his father’s father, where that stuff came from.”

The consequences of that pressure led, midway through the film, to what Shults calls “the ultimate tragedy.”

Later, another character’s reluctant visit to reconcile with his dying biological father in hospital is ripped directly from the director’s own life.

Filming the scene was “terrifying,” said Shults, adding that the plotline of a teenage boy dragged to the hospital bed by his girlfriend after years of not communicating was “as identical as can be” to his own life.

“It’s like an all-consuming dread that hits you at, like, the pit of your stomach, reliving the most traumatic thing,” he added. “It was cathartic. But it was hard.”

The movie has stirred controversy in some parts because its director is white.

Many of its poignant scenes about the black experience were shaped by Harrison and his on-screen father Sterling K. Brown (“This Is Us”).

But Shults — whose half-siblings are black — said he did not set out to write about a black family until Harrison came on board, and racial politics were always secondary to universal themes of family grief.

In fact, race serves mainly to amplify the father’s intense drive to succeed. Being black means “we are not afforded the luxury of being average,” the father tells his son during one argument.

“That’s all Kel (Harrison). That’s all with his dad. They had that very talk,” said Shults, who admits that trying to portray an African-American family’s experience was intimidating.