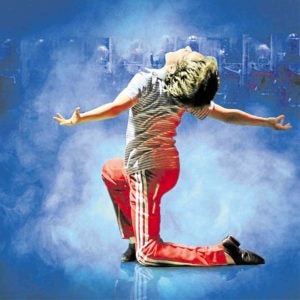 Last week, I had mentioned seeing the musical “Billy Elliot” at the Lyric Theatre in Sydney. When I found out this musical was running and that we’d be able to see it on one of our days off, I jumped at the chance.

It is one of my absolute favorite shows, having seen it at least three times on Broadway. I’ve also looked up as many videos on YouTube featuring many previous Billys dancing on television or (the ranks of which include the newest “Spider-Man” Tom Holland and Dean Charles Chapman of “Game of Thrones”).

The Elton John-Lee Hall musical directed by Stephen Daldry is about a young boy named Billy who lives in a rundown English mining town, where the miners are currently on strike.

One fine day after a boxing lesson, he ends up in a dance class and discovers ballet, thanks to a dance teacher, Mrs. Wilkinson (Lisa Sontag). After initial resistance from his dad (Justin Smith) and brother Tony (Drew Livingston), Billy auditions for the Royal Ballet School and is accepted. However, the miners lose the strike and return to work after a year of surviving without pay.

Ballet then becomes an opportunity for Billy to leave his more desolate life. In the original film on which the musical is based, we see a glimpse into Billy’s future, as one of the lead dancers in Matthew Bourne’s “Swan Lake,” and in the second act, that glimpse is fleshed out into a full pas de deux between the young Billy (played at this performance by Omar Abiad) and his older self (Aaron Smith).

The production currently running in Sydney is, for the most part, intact, with every moment of humor and pathos as written. The cast is wonderful, notably Mr. Smith as Dad, Ms Sontag as Mrs. Wilkinson and Oscar Mulcahy as Billy’s best friend Michael.

It’s also a political commentary on the miners’ strike and Margaret Thatcher’s rule as prime minister with the mines and the mining towns shutting down.

As for the young Mr. Abiad playing Billy, he isn’t the strongest dancer compared to many Billys past, but he is a star presence on that stage. With an expressive face and a pretty good singing voice, there is much potential to him.

And isn’t that the point of Billy Elliot, a story about a child whose potential was spotted, a child who was then allowed to go and fly despite the sad circumstances of his own life? Isn’t that a great wish for a many young artist—on talent shows, auditions and school drama club musicals—for someone to take notice and say, “I see you, and I want to see how far you can go?”

To the entire company of “Billy Elliot,” thank you for a wonderfully inspiring night at the theater, and for renewing my love for this musical.