Playing lesbians a baptism of fire for Cindy and Rhen 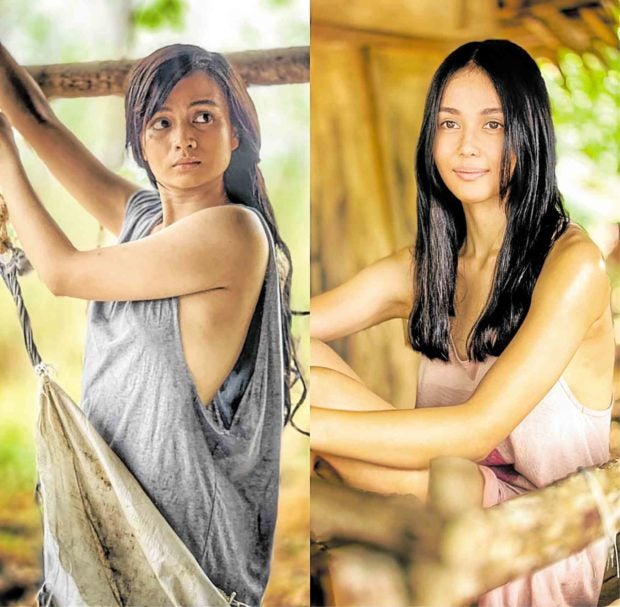 In the provocative story written by Yam Laranas, the gals’ closeness develops into a sexually charged romance. But the friends-turned-lesbian lovers eventually face a threat that will turn their world upside down.

Cindy and Rhen are relatively new in the biz, yet they had no qualms about playing lesbians and gamely did intimate scenes together. What a baptism of fire as the two hotties threw caution to the wind.

How did you prepare for your kissing scene, and how did it feel like?

C: I just internalized who Marian (my character) should be. I fell in love with Marian, so kissing Rhen in our movie felt normal. No awkwardness at all. I was just so into my character and forgot I was Cindy.

R: The intimate workshops made Cindy and I comfy with each other. It’s weird to say this, but kissing a girl felt the same like kissing a guy.

Why is “Adan” the title of your movie?

C: To emphasize that love is possible even without an “Adan.” It could also mean that there’s an Adan in all of us, and we just need to find it.

R: Because our movie shows that even “Eba” can have the “heart of Adan.”

What did you learn from the character you portrayed?

C: Respect. I know there are still issues regarding gender equality, but after portraying a lesbian role, I realized that great love doesn’t just exist between a man and a woman. Just give respect to everyone and let them love freely.

R: I learned that when love, lust and lies collide, it has tremendous impact on two people who are so in love with each other.

C: Alicia Vikander. Angelic, but don’t be fooled—she can be anything she wants to be. It’s my dream to play Lara Croft like she did in “Tomb Raider.”

Are you open to the idea of falling for a lesbian?

C: If my heart will fall in love with a lesbian, I will let it, because I don’t see anything wrong with it. When you love, everything is possible.

R: Our movie made me understand lesbians more. So I’m not closing my door to the possibility of falling for one, although I’m really straight.

How would you handle an indecent proposal?

C: Ignore. And make them realize why. I’ll show them I’m far better than their indecent proposal.

R: In this biz, I’m aware that happens. I have prepared myself mentally, so I won’t be tempted to entertain such a proposal. But I don’t judge girls who accept offers like that.

What can’t you resist in a guy?

C: Nothing. I can actually live without them, unless they need me.

R: Being smart and having a killer smile.

C: Handa akong mawasak, mabuo ka lang. (I’m willing to be broken so that you will become whole.)

R: That I must do everything for the one I love, even if it hurts because it will be all worth it in the end.