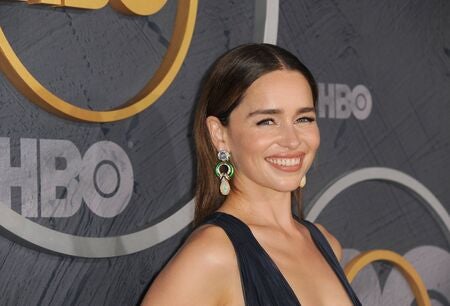 Emilia Clarke opened up on being pressured to do nudity for projects after “Game of Thrones,” stating that her experience with co-star Jason Momoa helped her in knowing her boundaries with nude scenes.

The actress said she was clueless on how to go about doing nude scenes when she was cast in “Game of Thrones,” her first major project after drama school, she said on Dax Shepard’s podcast “Armchair Expert” on Monday, Nov. 18.

Clarke said she perceived being naked on the set as “a job,” but when she was filming the first season, she felt lost.

Clarke said she would have not felt “worthy of needing anything” whether there was nudity or not had it not been for Momoa, who starred as her husband in the series.

“It was definitely hard,” she said. “Which is why the scenes, when I got to do them with Jason, were wonderful, because he was like, ‘No, sweetie, this isn’t okay.’ And I was like, ‘Ohhhh.’”

“He was always like, ‘Can we get her a f*cking robe? She’s shivering!’… He was so kind and considerate and cared about me as a human being,” she said.

But in her life after “Thrones”—and even if she had fewer nude scenes as the seasons progressed—she would still get asked to strip on the set. However, she now knows better, especially when it comes to saying “no.”

“I’m a lot more savvy [now] with what I’m comfortable with, and what I am okay with doing,” she said. “I’ve had fights on set before where I’m like, ‘No, the sheet stays up,’ and they’re like, ‘You don’t wanna disappoint your ‘Game of Thrones’ fans.’ And I’m like, ‘F*ck you.’”

Clarke has gone on to star in films such as “Solo: The Star Wars Story” and this year’s “Last Christmas,” which premieres in the Philippines on Nov. 27. Niña V. Guno /ra