‘Kiss of the Spider Woman’ 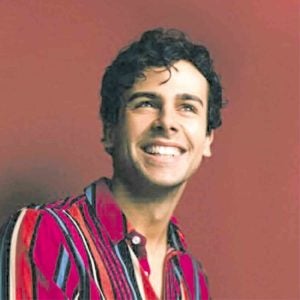 MELBOURNE—First of all, please allow me to say thank you to our audiences in Brisbane, Sydney and Melbourne for coming to see me perform on my third Australian tour. We have one more concert tonight at Palais, and it’ll be quite bittersweet to say goodbye to this beautiful city and country.

Because we had so much time in Australia between performances, we all were able to take in a couple of restaurants (Chin Chin on Flinders Lane in Melbourne is one definite favorite for me, as is Chophouse in Sydney for Gerard and DJ), as well as watch musicals.

In Sydney, we were able to see “Billy Elliot,” one of my all-time favorite shows (congratulations to the company on a wonderful night), and here, we caught the very first preview of the Melbourne Theatre Company’s production of Kander and Ebb’s “Kiss of the Spider Woman,” starring Caroline O’Connor as Aurora/Spider Woman, Ainsley Melham as Molina and Adam-Jon Fiorentino as Valentin.

Granted, one doesn’t exactly leave the theater humming the tunes in the way of “Maybe This Time” or “All That Jazz,” but that doesn’t mean the action isn’t propelled by the music. And for a first preview, the show felt as close to being ready for opening night as it could, with the cast from top to bottom in pretty good shape, and only a few technical elements needing some small refinements.

However, I had one major takeaway from this production, one performance that hit me hard and stayed with me long after the final curtain call. It was that of Ainsley Melham, the actor who played Molina.

Ainsley is no stranger to audiences in Australia, having been on TV as a cast member of Hi-5, and as the title character in “Aladdin,” later on playing that same role on Broadway not long ago.

If I had read the “Spider Woman” program prior to the start of the show, I might’ve been saddled by certain expectations given those two credits on his biography. Thank goodness I didn’t, and with the exception of Miss O’Connor, I had no idea who or what I’d see.

And what I got to see was an explosion of so much talent that my jaw fell on the floor from how incredible that performance was.

This was the first time I ever saw Ainsley perform in a show, and I’m so glad it was this performance that introduced me to his gifts as an actor, singer and dancer. Beyond being highly skilled in all those disciplines which is impressive enough, it’s that he used all of them to disappear into Molina that really got me.

Laser-sharp, focused, consistent, honest, direct and at all points beautiful, Ainsley painted the portrait of a man whose imagination and escape into the various movies of his favorite film actress, not as a caricature, but a real human being everyone in that audience could relate to and empathize with.

If that performance took place on Broadway, at the very least he would be nominated for a Tony. It felt that strong, that powerful.

To you, dear Ainsley, congratulations on such a fierce performance, one that I will not soon forget. And to everyone in the company, thank you for a spectacular night at the theater. Be proud of what you’ve created. Those audiences are all so fortunate to share space and breath with you.