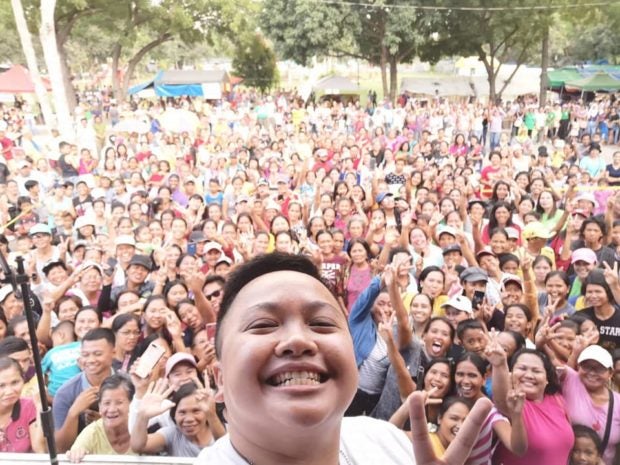 Ice Seguerra with the victims of the earthquakes that hit North Cotabato. Image: Facebook.com/lizadino

Amid financial support and donations, multi-awarded artist Ice Seguerra helped the victims of the strong earthquakes that hit Mindanao last month in his own way, through music.

Liza Diño-Seguerra, his wife, spoke about Seguerra’s journey last week, when he performed in the many evacuation centers where the displaced victims of the earthquakes are currently located, as per her Facebook post last Friday, Nov. 15.

“My husband at his HAPPIEST AGAIN,” Diño-Seguerra, CEO and chairperson of the Film Development Council of the Philippines, said. “Ice has spent the last two days traveling all over North Cotabato para magreach out sa mga kababayan nating nabiktima ng lindol (to reach out to our countrymen affected by the earthquake).”

My husband at his HAPPIEST AGAIN. Ice has spent the last two days travelling all over North Cotabato para magreach out…

Seguerra visited at least 10 evacuation centers, including those in Kidapawan, Cotabato and Davao del Sur, according to Diño-Seguerra.

She said that despite not being able to help out financially, Seguerra’s music is at least able to help the victims by lifting up their spirits.

“Buhay na buhay sya pag nakakatulong sya sa mga kababayan nating displaced or nabiktima ng sakuna (He is very alive whenever he is able to help our countrymen who are displaced or victimized by calamities),” she said.

“We may not have monetary funds to give to them but through his sharing of his music and being ‘present’ — showing them that they are not alone sa mga pinagdadaanan nila at merong mga taong handang dumamay sa kanila, it relieves them somehow sa kung anumang ang pagsubok na kinakaharap nila sa kasalukuyan,” she added.

(We may not have monetary funds to give them but through his sharing of his music and being “present”, showing them that they are not alone in what they are going through and that someone is ready to empathize with them, it relieves them somehow, despite whatever challenges they are facing.)

On October, North Cotabato and other parts of Mindanao suffered three strong earthquakes with magnitudes 6.3 (Oct. 16), 6.6 (Oct. 29) and 6.5 (Oct. 31), along with hundreds of aftershocks, according to the National Disaster Risk Reduction and Management Council. JB

Ice Seguerra opens up about battle with depression, anxiety

Ice Seguerra, Liza Diño reveal how they made each other better, happier in anniversary messages

Vicki Belo appeals for help for Cotabato: ‘We’ll see this through’

Read Next
WATCH: Alex Gonzaga goofs around in Erwan Heussaff’s kitchen, asks him about Anne Curtis’ singing
EDITORS' PICK
Metro Manila’s daily COVID-19 growth rate drops to 2% — Octa Research
Over 3 Million worth of prizes to be won at Smart Padala’s SENDali Manalo Promo!
SMDC’s Bloom Residences: A master planned community that cares for your health and wellness
What to expect as Metro Manila starts ‘no vaccination, no ride’ policy on Monday
COVID-19 cases in PH pass 3.2 million mark with 37,154 new cases — DOH
Upsilon, Unilever give ‘real talk’ on climate change crisis
MOST READ
Thailand records first Omicron death
‘Not my loss’: Did Kris Aquino just comment on her breakup with Mel Sarmiento?
Prince Harry sues for UK police protection
Ivana Alawi tests positive for COVID-19, urges public to comply with health protocols: ‘No one’s above the law’
Follow @IBiongINQ on Twitter
Don't miss out on the latest news and information.