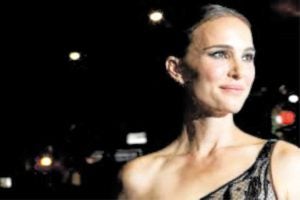 Award-winning actor Natalie Portman posted on Instagram a photo of herself in bed, her head buried in a book. “Can’t keep my nose out of my friend Emma Forrest’s new book, ROYALS. #whatnatreads #novemberbookpick,” she captioned the photo.

“Royals” uses Diana’s wedding to Charles, Prince of Wales, as the backdrop for telling the story of 18-year-old Steven, who has not yet made up his mind if he is gay. Good Reads says of the book, “Devastating, dazzling, queer and radical, ‘Royals’ is a love story between unlikely friends from completely different worlds. It’s about the power of art to transform lives and the power of families to destroy them. It’s about working out who you are and what you want. It’s a tale of giddy happiness, crushing lows and, ultimately, the fragility of lives lived too fast.”

marconious.falcon reacted to the post: “I knew you were well-read I’m impressed.”

Portman, star of the “Star Wars” prequels, was recently seen in “Lucy in the Sky,” a drama inspired by American astronaut Lisa Nowak. Released in October, the movie featured Portman as Lucy Cola who, returning to Earth after a long mission, began to lose touch with loved ones and reality.

Dwayne “The Rock” Johnson, a third generation superstar of World Wresting Entertainment, will do his “first true dramatic role in his film career.” He will star and produce a film about champ Mark Kerr of UFC (Ultimate Fighting Championship).

“This one has a deep personal connection to me considering the many parallels our lives had. Thank you @markkerrstm for trusting me and @sevenbucksprod with your life rights and extraordinary story.

“This man was once considered the greatest heavyweight MMA (mixed martial arts) fighter in the world. A true pioneering UFC legend. And truly, one of one.

“Demons of fame, drug addiction, mental health and the pressure to be #1 took over. Like many fighters in the cage or the ring, there’s a deep humanity and depth of character with this man that the world should see.

“We’ve all hit rock-bottom. Some make it back up. Some don’t.

“Giving this one my all.”

Johnson has so far starred mainly—and successfully—in comedies, family and action movies. His latest project, “Jumanji: The Next Levels” is scheduled for release on Dec. 13. He costars with Kevin Hart, Jack Black and Karen Gillan.