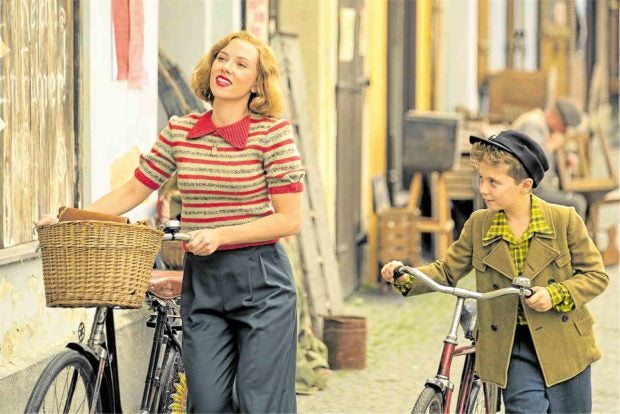 LOS ANGELES—Scarlett Johansson has always had a reputation as one of her generation’s finest actresses. This year, she turns in not one but two nomination-worthy performances.

In Noah Baumbach’s wrenching “Marriage Story,” Scarlett plays Nicole, an actress who struggles through a divorce from her theater director husband (Adam Driver), with whom she has a son (Azhy Robertson).

Set in Germany in WWII, Scarlett’s Rosie is a secret anti-Nazi but allows her son, Jojo (Roman Griffin Davis), to join Hitler Youth (he even has an idiotic version of the Führer as his imaginary friend) for his survival, even as she hides a Jewish girl, Elsa (Thomasin McKenzie), in their attic.

In real life, the talented actress has a daughter, Rose Dorothy Dauriac, with French advertising executive Romain Dauriac, from whom she was divorced in 2017.

Divorces are traumatic for many children. What was your approach? There’s a lot of books about that. I separated when my daughter (Rose Dorothy, now 5) was so young. She was a little baby.

If ever my daughter asks me why I’m not with her dad anymore, I will say, “We’re better as friends. When we were a couple, it wasn’t so nice and we had arguments. Now, we’re friends. We can communicate better and we can love you separately. It doesn’t change our feelings about you at all.”

What’s interesting about “Marriage Story” is how the love between these two characters makes a complete reversal. What’s your take on what happened to their relationship? Every relationship is different, obviously. What makes the film so touching is that what remains between the two characters is a lot of love. I don’t think hate is totally apt. I think there’s a lot of anger, frustration and disappointment that the characters feel. They have a lot of resentment for different reasons.

I can only speak for my character, Nicole. A lot of her choices were dependent on uplifting her husband (Charlie, played by Adam) and fulfilling his dream. That gave her a lot of satisfaction for a long time and when it wasn’t reciprocated, at some point she needed it to be (reciprocated) because she also felt empty and had dreams that she wanted to fulfill.

When that wasn’t reciprocated, she felt a lot of sadness and resentment because of that. These people have spent 10 years together and they have a beautiful child that came out of this love.

While they understand that they don’t belong together anymore, they don’t necessarily see their marriage as a failure.

I don’t think that it’s hatred that they feel for one another. It’s just a lot of anger and frustration, but they work it through.

It’s not a fictionalized relationship. It feels very real and visceral, because of the dimension of the relationship and its many facets. It’s complicated, like all relationships are.

What’s your opinion of divorce lawyers? I don’t have that much insight, but I think Laura Dern is probably a better person to ask about that because she plays one in this.

But she says very wisely that divorce lawyers are there to hear your story, empathize with your story and then craft the life for you that they believe you deserve. And that’s what they fight for.

You see the toxicity of the system in this film. The system feels very corrupt, crazy, backward and insane. 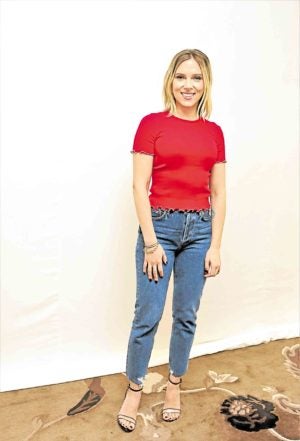 What changed for you after you became a mother? It’s impossible to quantify that because everything changes once your heart grows this other chamber you didn’t know was possible. And you feel that you would do anything for another person. Any single thing for someone else’s happiness.

I don’t know that I’ve ever felt that way or understood that kind of love until I had my daughter.

You just have to be present with whatever’s happening, just being able to let go of control in that way actually makes me feel much more in control.

How do you handle the coparenting? I think pretty well. We do as good as we can. I never experienced anything like it before so there was no rule book.

But if you have respect for the other person and speak respectfully about him, and even though you may have your frustrations or whatever that led you to not be with him as a partner, you still can respect him as a parent. That’s how we try to act in that space.

Can you talk about how “Jojo Rabbit,” although it is set in the Hitler-Nazi era, resonates strongly even today? Taika Waititi wrote the story in 2011. The sad irony is that the film seems more relevant now than it even did almost 10 years ago.

The relationship between the mother and child was so powerful to me. I related so strongly to this woman who was trying to keep her home alive when everything else around her stops making sense and everything starts crumbling around her.

That primal drive to protect your child at all costs—that was so much what this film was about for me. And Rosie’s drive also to protect young Elsa and to do whatever she could to save the people she loved, it was so brave and powerful. That a woman who was in the middle of her life would be brought to such desperation was illustration enough to show the atrocity of the time.

One of the reasons Taika made “Jojo Rabbit” was to engage the younger generation and make sure to never encourage again the flourishing of hate and racism that allowed the Holocaust to happen. Can you comment on the opinion that [President Donald] Trump’s rhetoric is inflaming the rise of hate crimes and incidents in the United States? It’s unprecedented in my lifetime. I’ve just never experienced that in this country before—a bully president.

A person who’s actually mean, has seemingly no sense of empathy and has almost like psychosis. It’s very disturbing and I think people are scared. And when you’re scared, you either join the bandwagon because you’re terrified and don’t. That’s your way of surviving.

Or you go the other direction and fight that hatred with love, unity and compassion. He (Trump) has such a humongous impact globally, and it’s scary.

If you had a choice between doing an “Avengers” movie and “Jojo Rabbit” and “Marriage Story,” which one would you like to do? It would be like a Sophie’s Choice for me. There’s certainly plenty of room for all kinds of cinema, especially now with all these different platforms.

Are you still prepping for your directing debut, “Summer Crossing”? In my dreams, I am. I wrote a script for it and at the time I was supposed to direct “Summer Crossing,” I had a couple of scheduling problems because I was working for Marvel. That would always take precedence.

And then I got pregnant. That obviously took precedence. After that, it became a thing that never came to fruition. But I’m still interested in that project.

When did you want to direct? I was 12 years old. I was doing “The Horse Whisperer,” and then I saw Robert Redford directing. I was like, “Oh, that’s a good job. I want that job.”