Jacob Batalon on ‘Let It Snow,’ playing Spider-Man’s best friend and the OPM he loves to sing 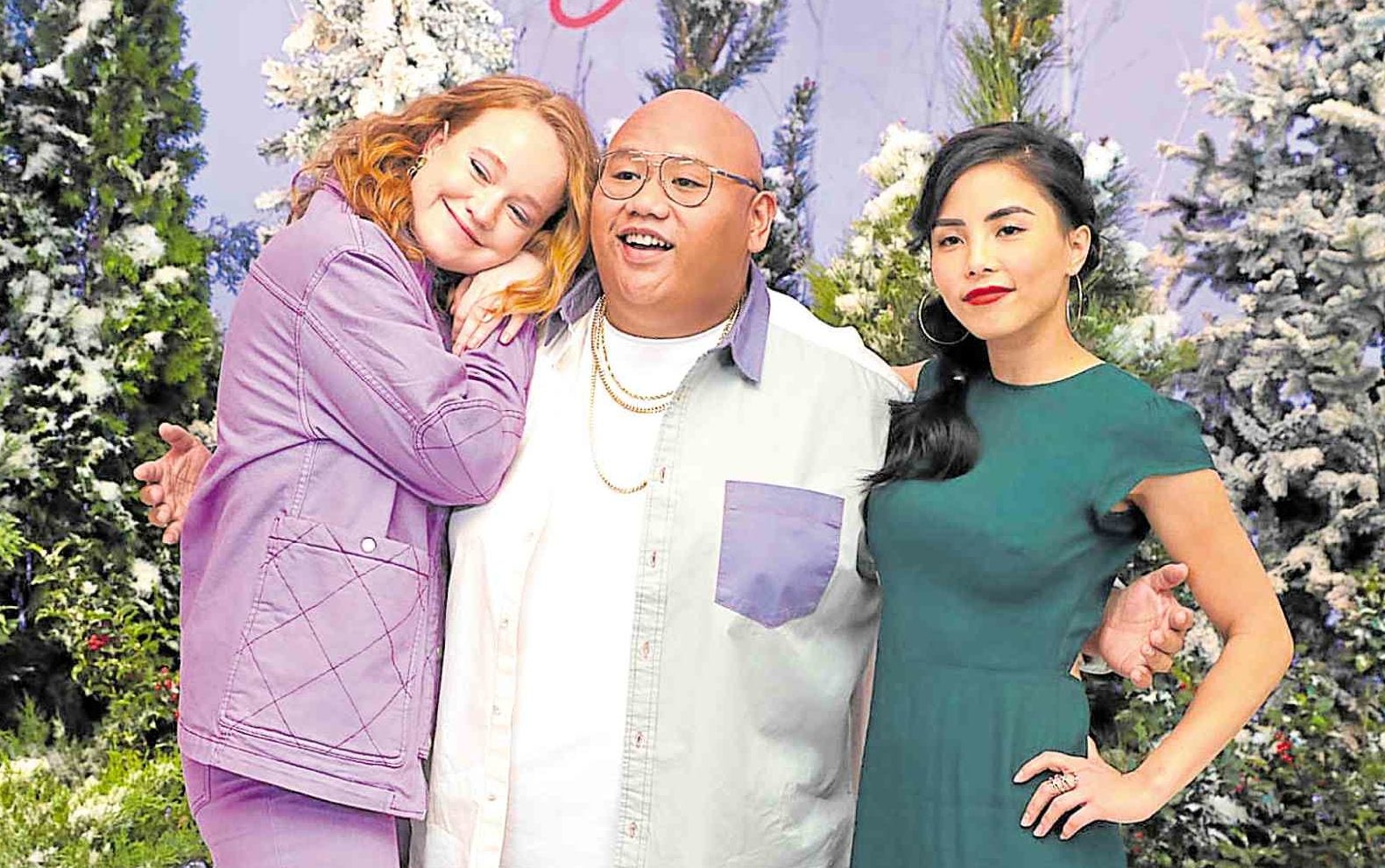 We always look forward to our one-on-one interviews with Hollywood celebrities because they enable us to glean beyond “curated” images and the characters that catapulted them to global stardom.

Chatting with Fil-Am actor Jacob Batalon last Saturday was more than enough proof where Ned Leeds, the 23-year-old performer’s affable character in the “Spider-Man” and “Avengers” films, got his charm and crowd-pleasing appeal. The Fil-Am actor endeared himself to MCU’s (Marvel Cinematic Universe) persnickety followers with his winsome portrayal of Peter Parker’s best friend.

Our talk with Jacob last Saturday to discuss his participation in “Let It Snow,” the Christmas-themed ensemble comedy that will be streamed on Netflix beginning Friday, “introduced” us to a self-effacing actor devoid of pretension or braggadocio.

Based on the New York Times best-selling book by John Green, Maureen Johnson and Lauren Myracle, the movie takes place on Christmas Eve in the small midwestern town of Laurel, Illinois. It follows what happens when a disparate bunch of high school seniors is brought together by an ill-timed snowstorm.

Adding excitement, confusion and cheer are a stranded pop star, a stolen keg, a squad of competitive dancers, a mysterious woman covered in tin foil (special guest star Joan Cusack) and an epic party at the local Waffle Town hangout.

In the film, Jacob plays Keon, a DJ wannabe whose plans to host a party are foiled when bad weather forces his traveling parents to return home.

“I watched a lot of romantic comedies growing up in the 2000s [and early in this decade], like Will Smith’s ‘Hitch,’ ‘Love Actually’ and ‘Crazy, Stupid, Love,’” he  told the Inquirer. “And with a talented cast and a good director in Luke Snellin, this movie was just a lot of fun for me to do. It was a great experience for all of us—we hang out and had a good time.”

Jacob was in very good company. He was thrilled to join the rom-com not just because he grew up loving the genre, but also because its cast included exciting newcomers and promising young actors who, like him, could become Tinseltown’s biggest stars in the coming film seasons.

Our chat with Jacob was enlivened even more by his recollections of growing up in a musically inclined Filipino household in Hawaii that was fond of family get-togethers and karaoke sessions. 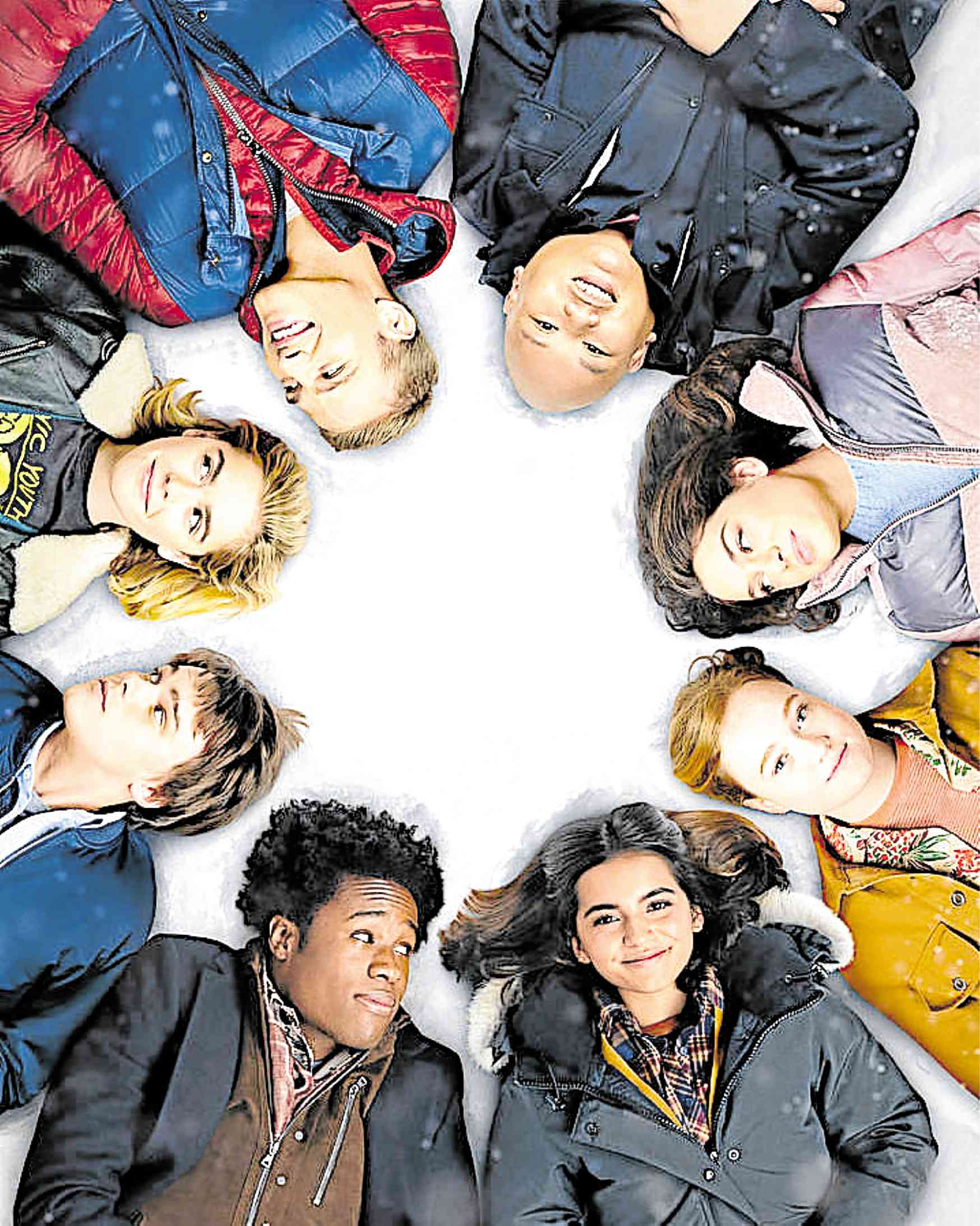 Cast of Netflix’s “Let It Snow,” which begins streaming on Nov. 8

Excerpts from our chat with Jacob:

Your quirky onscreen characters always provide a burst of positive energy to the films you’re in. “Let It Snow” is no exception. Are you as feisty or kooky as Keon or Ned Leeds in real life? Thank you. I try to be (laughs). These roles play  a big significance in  my career.

In real life, however, I pretty much keep to myself. I’m very quiet and I have a few close friends. So, I’m sort of different in that way (laughs).

Your character Keon loves to party and is very musical. How similar are you to him in terms of musicality? We’re both very musical, definitely. I’ve always enjoyed having music around me. And coming from a Filipino family, I’m very much inclined to listening to all sorts of music.

Growing up, there was a lot of singing and dancing around the karaoke—stuff like that. So, it’s a thing that I grew up loving.

As a boy, you were always asked to sing at get-togethers. Are you familiar with Filipino songs? Yeah, I’d say one of my favorite songs is “Bakit Ba?” by Jessa Zaragoza.

You have to come to Manila and sing it for us, Jacob. Oh, I’d love to (laughs).

“Let It Snow” is about teenagers on the verge of change. The way we see it, the feel-good film uses Christmas Eve as a metaphor for growing up. What do you consider were the most significant changes in your life? That’s what I like about the movie. It handles all those life-defining things [you mentioned] pretty well. As teenagers, you have to decide whether or not you want to be responsible for your life and your future.

In Keon’s case, he wants to be successful so he doesn’t have to worry about anything when he becomes an adult.

The same is true with the other characters in the film—they’re trying to discover themselves, figuring out who they love and deciding what they truly want in life. That’s part of puberty and growing up.

As for myself, moving away from home was like the first big step [in that direction]. 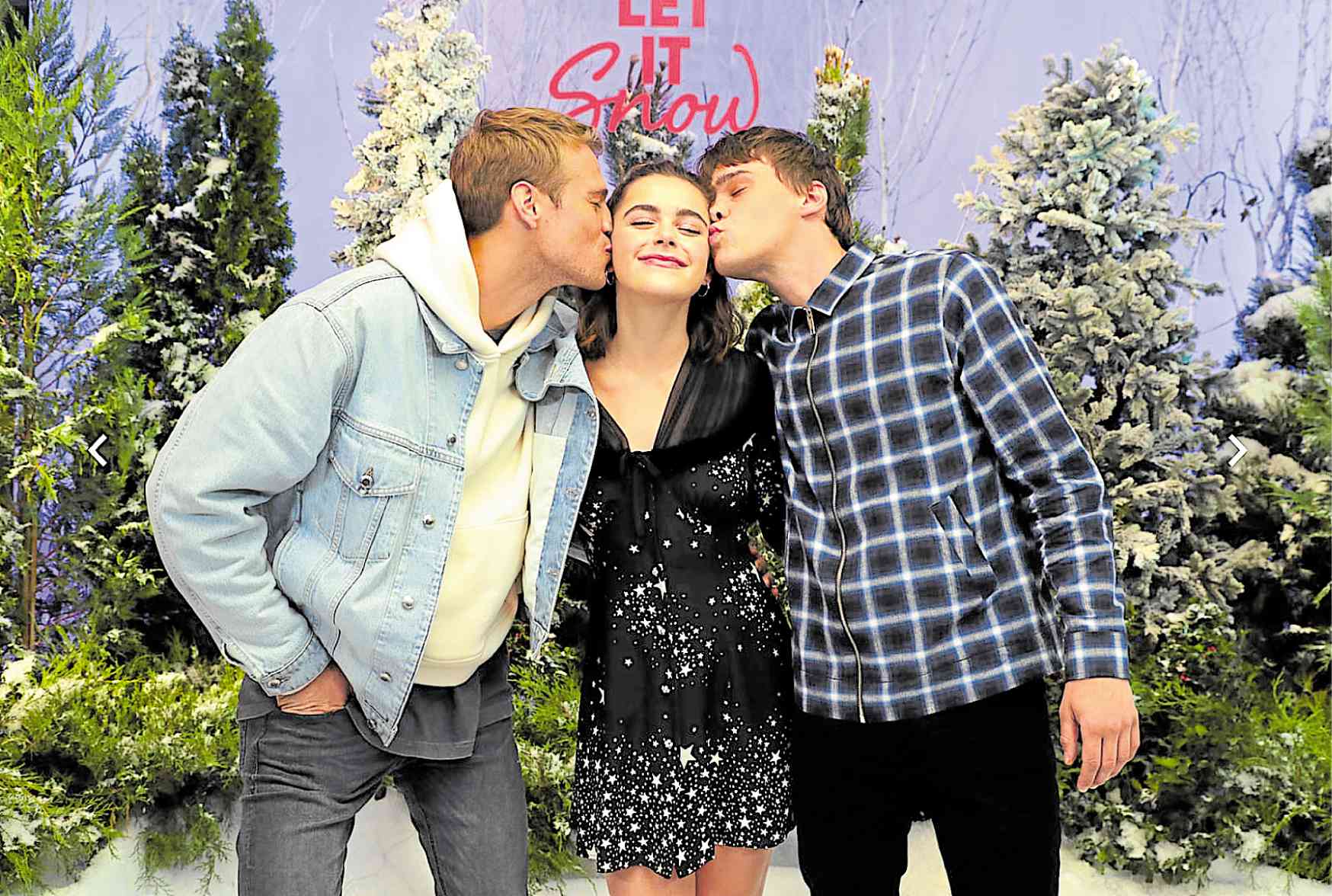 From left: Matthew Noszka, Kiernan Shipka and Mitchell Hope at the LA premiere of “Let It Snow”

Kiernan Shipka said she read the book when she was 15. Did you read it before you were offered the role of Keon? No, I haven’t really read it, but I was aware of its popularity.

The script is pretty much the same as the book. They lifted most of it from the book itself.

How long did it take you guys to shoot the film? Was the shoot as festive and fun as it appears in the film? We all had different shooting schedules, but we spent as much time together as we could. We had more fun in scenes where the whole cast was together. After work, we’d just hang out.

We were in Toronto for about two months, maybe a month and a half. This was in February and March, so it was really cold. But working with people your age is so much fun.

The film shows how the characters’ Christmas Eve celebrations are upended by too much snow and bad weather. What were your Christmas Eves like growing up?

It was pretty Filipino, you know? I feel like Filipinos celebrate Christmas really early because they just like having that sort of Christmas spirit all the time. It’s just like love. Mine was being around my family all the time.

Were you cooking up a film or TV show when you visited Manila recently? No, I was there just to promote “Spider-Man: Far from Home” (laughs).

Filipino and Asian actors look up to your success as a source of inspiration and motivation. Do you feel any pressure knowing that? Oh, thank you! No, I don’t feel any pressure per se. But I am truly grateful that they see my work that way.

I’m very appreciative of the respect I get, and that means a lot to me. As much as I can, I just try to represent us all the time.